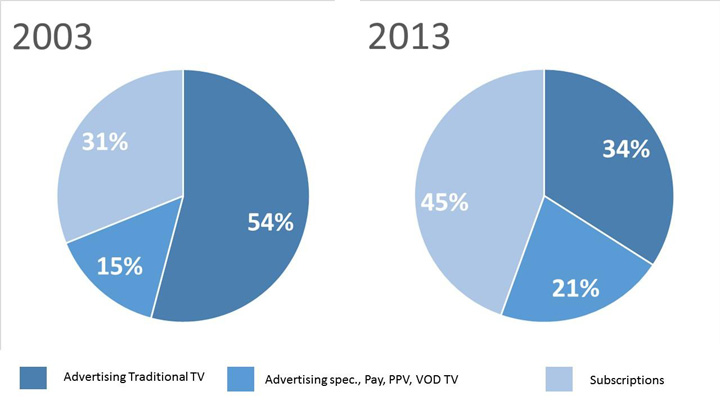 In 2014, revenues from these services increased by 3.1% compared to the previous year, rising from 4.1 to 4.2 billion dollars. This increase is largely attributable to an increase in subscription revenues of $160.3 million (or 5.9%) compared to 2013, which more than compensated for the drop of $53.6 million (or -4.2%) in national advertising revenues.

A major driving force for growth in specialty service revenues was sports services (such as TSN, Sportsnet and RDS), which saw their revenues increase by $124.2 million (or 13.6%) in 2014.

Specialty, pay, pay-per-view and video-on-demand television services invested $1.5 billion in the creation of new television programs produced by Canadians, an increase of over 12% compared to the $1.3 billion invested the previous year. Again, this increase is largely attributable to sports services, whose Canadian programming expenditures increased by $132 million (or 32%) compared to 2013.