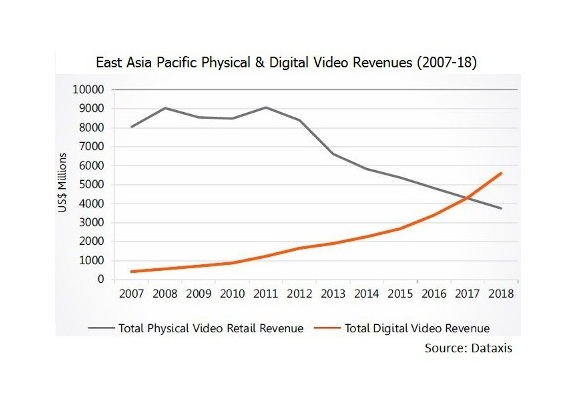 Growing high-speed broadband penetration is set to boost the revenues of 12 digital video markets in the East Asia-Pacific region to US$4.31 billion in 2017, according to Dataxis. The two major markets of Japan and South Korea accounted for 96.7% of the region’s digital video total in 2007, generating revenues of around $400 million. By 2014, and the rise of digital video rentals and subscription-based VOD services, this figure had risen to $1.92 billion, say researchers.

Japan had an estimated 10 million SVOD subscribers at the end of 2010, though growth should be rapid now US online streaming giant Netflix has launched in the country, according to the Dataxis report APAC Video Market 2015. By the end of 2014, Japan and South Korea, together with the region’s other prime video markets of Australia and New Zealand, accounted for 96% of total digital and physical video revenues. Australia and Japan alone generated about US$5.4 billion in physical video revenues, representing more than 90% of total physical revenues across the region