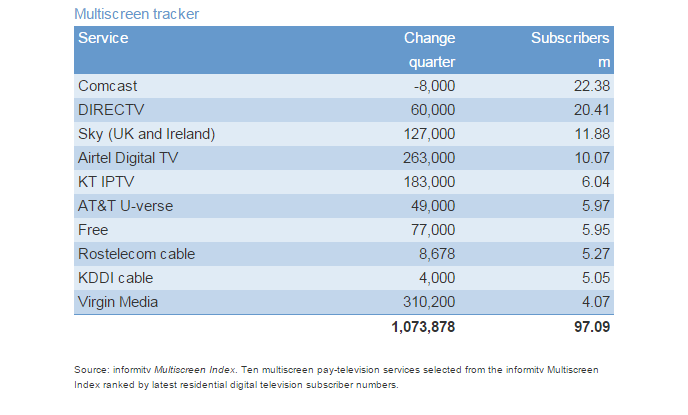 Multichannel video providers can relax — at least for this quarter.

The top 10 multichannel video providers added 54,800 subscribers in the first quarter of this year, according to informitv Multiscreen Index.  That is a welcome uptick from a loss of 232,100 in the prior three quarters. Of course, MVPDs might not want to rest on their laurels yet given the trajectory of recent quarters.

Nonetheless, these stats are reassuring for MVPDs, as they suggest that over-the-top services might not be so cannibalistic. In fact, both online video streaming servers and traditional pay TV might be able to co-exist nicely. At the same time that MVPDs gained subs, over-the-top services have also been growing rapidly. All signs suggest over-the-top services will continue to rise, given fare available from the likes of CBS, HBO, and others. Pricewaterhouse Coopers had said the over-the-top markets will jump from $3.3 billion to more than $10.4 billion in 2018.

“Although OTT may just be ramping up, it’s clear that it empowers consumers with something they have not had before—the ability to get the content they want, when they want, where they want, directly from the content owner,” said Limelight Networks in its just-released annual report on online video. “Still, as pointed out previously, we are in the nascent stages of OTT’s growth—online video represents only a fraction of content consumed as part of the ‘television experience.’