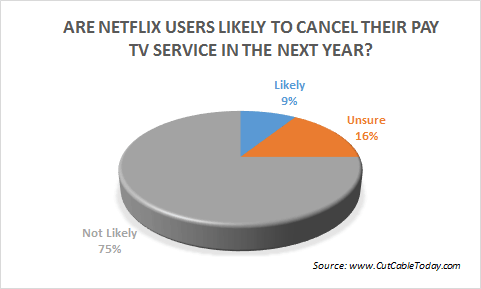 Although the death of cable and satellite pay TV isn’t quite upon us yet, it’s certainly closer, at least if a new study done on Netflix subscribers is any indication.

The new study found that only 67 percent of Netflix subscribers even have a pay TV subscription, which means that about one-third of subscribers have cut the cord and canceled their cable and satellite services completely.

What’s even more enlightening about this survey, done by website Cut Cable Today, is that another nine percent of Netflix subscribers plan on canceling their pay TV subscriptions soon, while another 16 percent are unsure if they’ll keep their additional pay TV services in the long run.

This study shows the huge impact that online streaming services, such as Netflix, have on pay TV. Although that impact was once small, it’s growing by leaps and bounds every day as people embrace paying less for Internet plus a video on demand streaming service to watch television than what they would pay for a cable or satellite subscription.