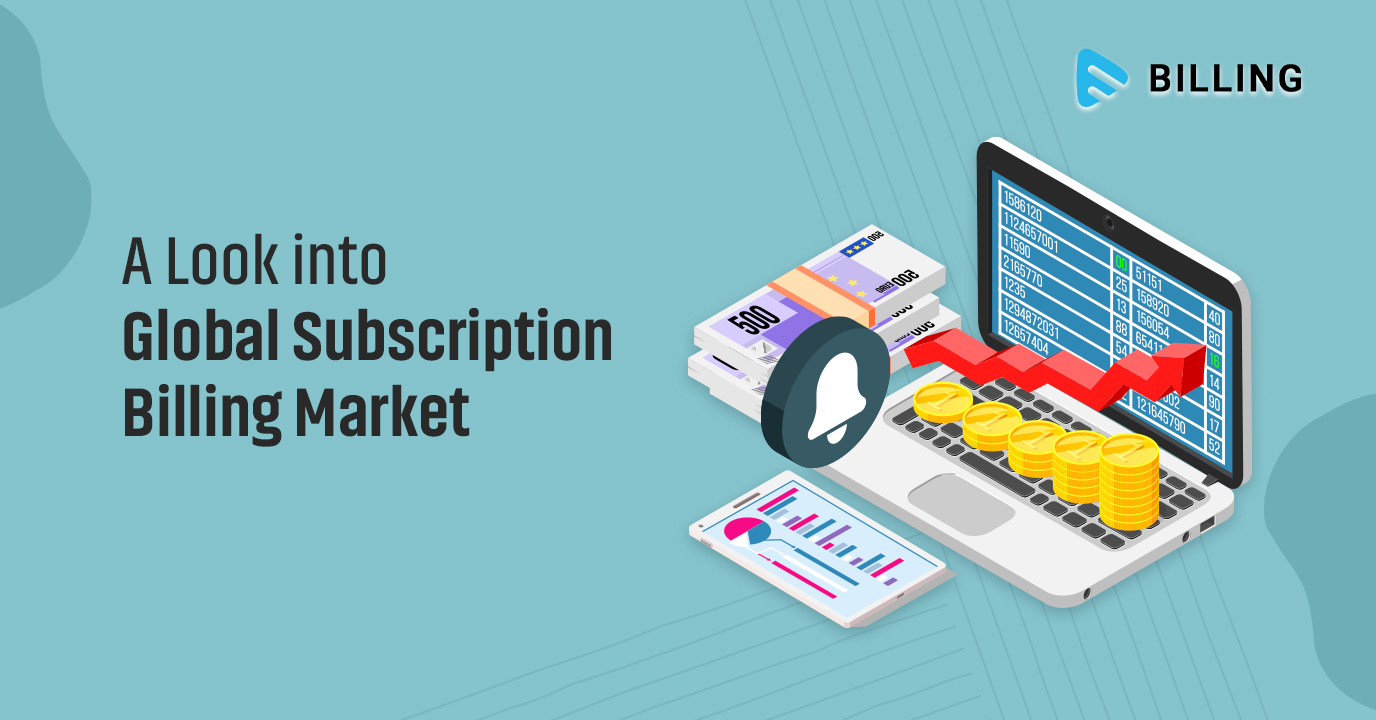 The global subscription billing market is expanding fast, paving new paths for the players and stakeholders in this field. The market is set to expand at nearly 14% CAGR and reach over US $7.5 billion through 2025 from its benchmark of US $4 billion in 2020 globally. The revenue of the global market stood at US $4.149 Billion in 2019, and is subject to reach US $7.862 Billion in 2025, with a CAGR of 11.24%.

The rise in adoption of subscription billing models coupled with the demand for adhering to the compliances and optimizing revenues is subject to surge the requirement for such billing systems further. According to a recent report by Innopay, 59% of the global subscribers have 1 to 5 monthly subscriptions, while 19% have 6 to 10 monthly subscriptions! This gives a glimpse of the unlimited growth scope in this field.

In this report, we will brief about the latest trends, demand, growth and other significant factors in the subscription billing market of the leading regions across continents. 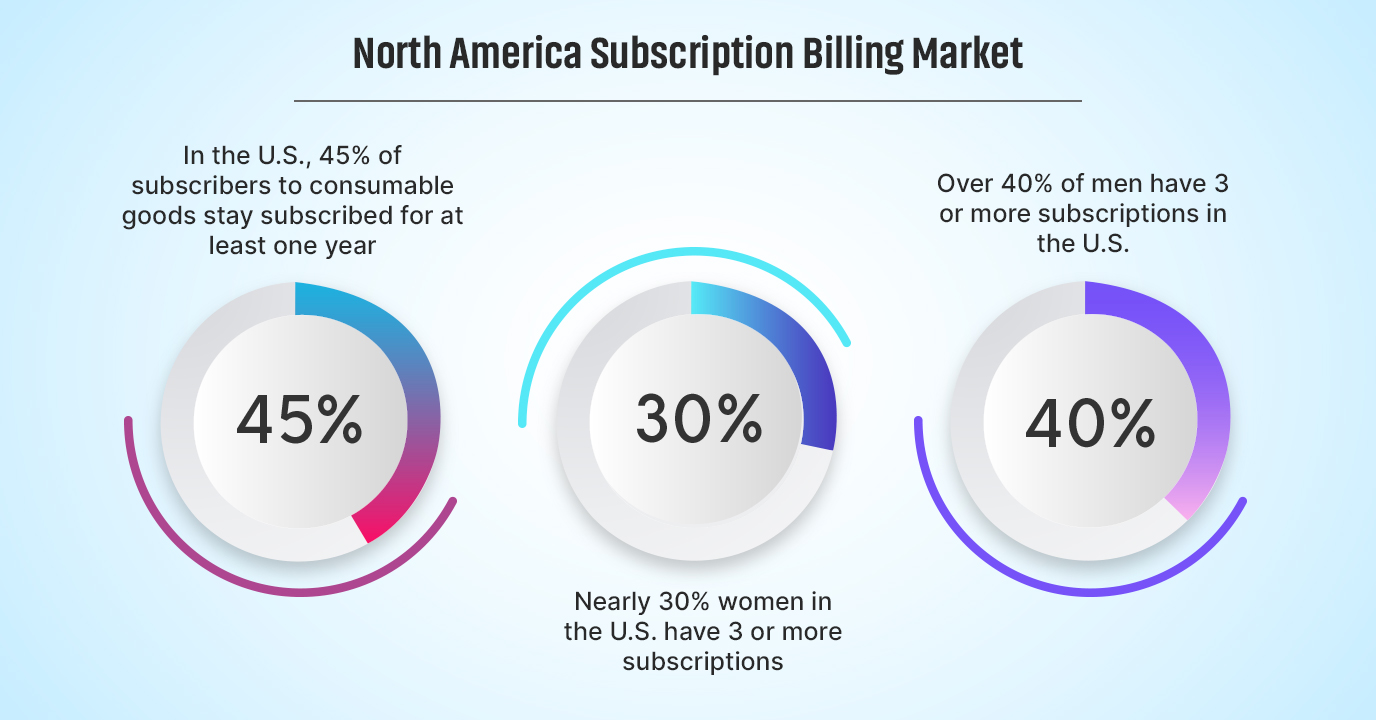 The United States being the epicentre of the North America market is subject to hold the major share in this region, followed by Canada, Mexico, and a few other countries. 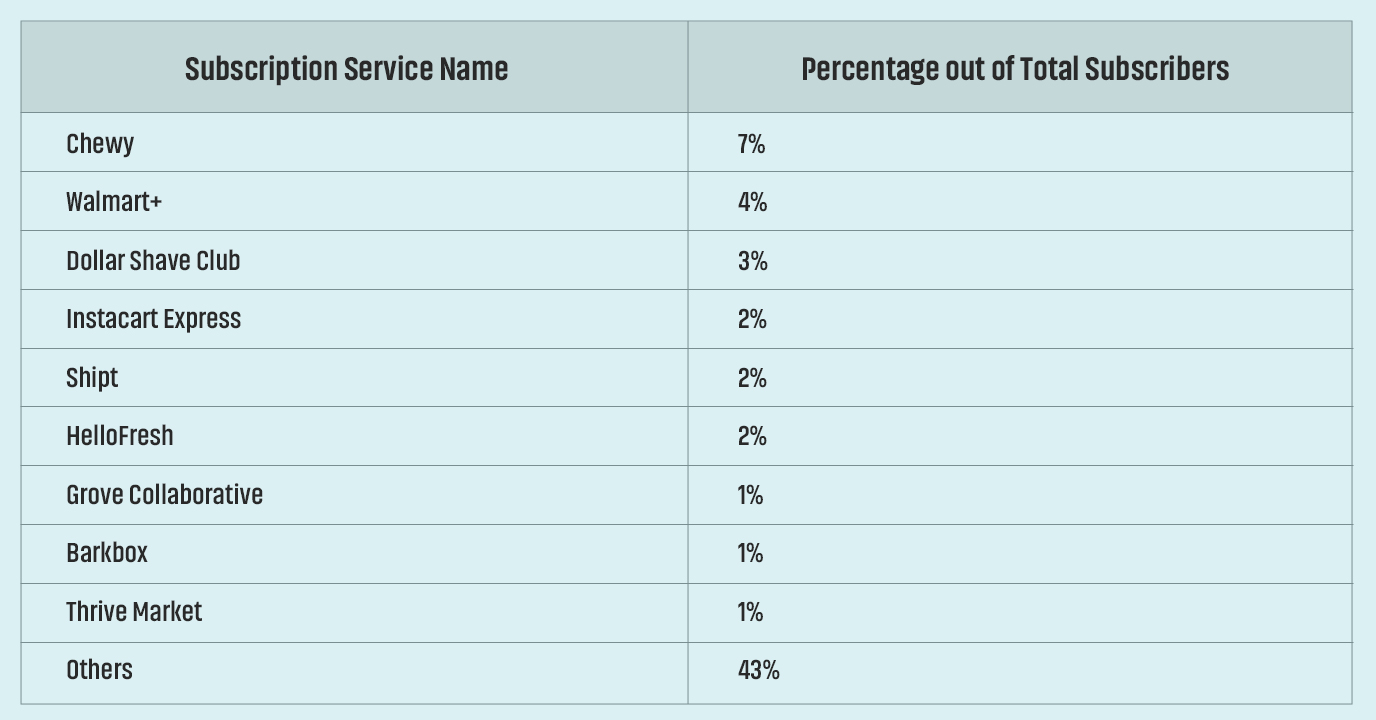 Furthermore, the inclination towards subscribing to various streaming, media and entertainment services is spiking which in turn is making the subscription billing systems more widely adopted among the business players.

For instance, the number of Pay TV subscribers in this region is predicted to reach 64 Million by 2026. To give a deeper insight, the number of OTT subscribers per 100 households in the U.S. and Canada are respectively 164% and 132%. Such businesses having subscription billing models, the market is set to expand further. The overall U.S. subscription billing management market is expected to maintain nearly 13.9% growth momentum through 2025.

Europe, the second largest subscription billing market has grown steadily over the past years with the United Kingdom in its spotlight. The recent Innopay report stated that in Germany, Spain, France, and Benelux, 75% of respondents make use of subscriptions for telecommunications, insurance, and utilities, while Italy has the highest level of the potential subscription users of 20%. 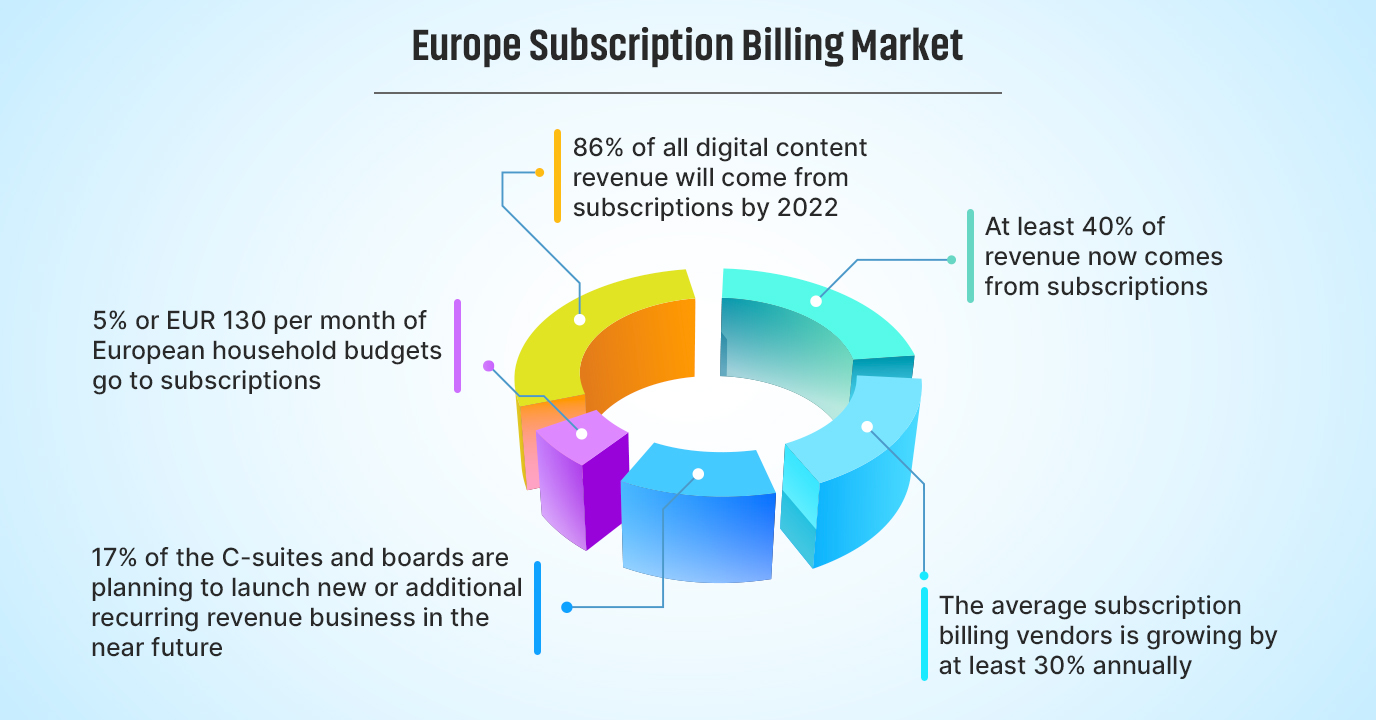 As per the latest market research reports, Germany, the leading country in Europe, is predicted to remain on the forefront while adding over US $257.5 Million to the Europe subscription billing market in the next 5 years.

A Sneak Peek into the Driving Factors & Stats of Europe Market

Asia Pacific has emerged as the fastest growing subscription billing market in the world with the leading countries China, Japan, South Korea, and others. Backed by growing B2B and B2C SaaS businesses and fast adoption of subscription-based pricing models in diverse sectors such as OTT, food, e-learning, gaming etc., Asia Pacific remains the hotspot in the global market. As stated in a recent report by Statista, 36.4% of the internet users in Japan, aged 16 to 64 years, used a video streaming subscription service in 2020 and the number is likely to grow in the upcoming years.

Japan’s subscription billing market will surpass US $167 Million by 2025 keeping it in the limelight for the key industry players and stakeholders, while China is set to grow at 20% over the upcoming years.

According to a report by ACI Worldwide published in 2020, over the past 7 years, companies throughout North America, Europe and Asia Pacific have witnessed subscription based sales growth of more than 300% and growing demand for streaming services remains one of the major reasons for that.

A Sneak Peek into the Driving Factors of MEA Market 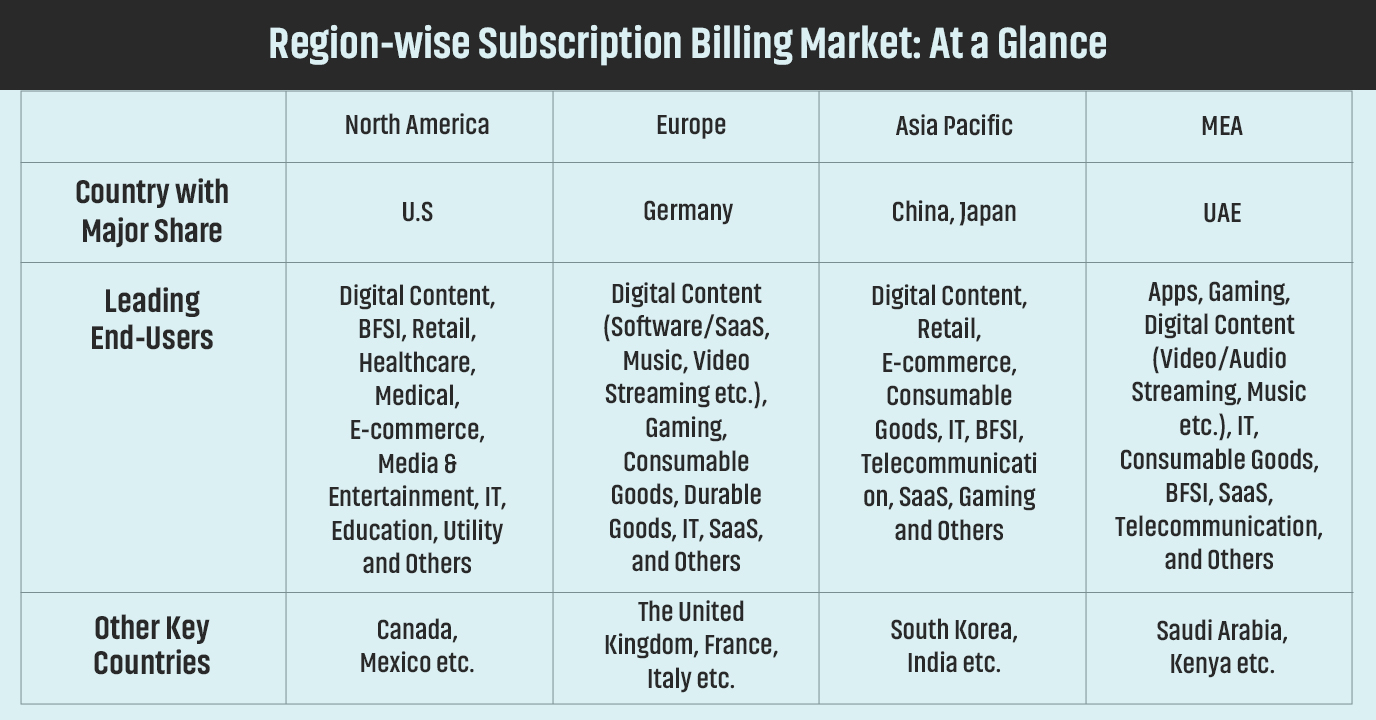 With the competition getting fiercer, the top companies in the global market are investing heavily alongwith adopting strategic approaches to secure their positions.

Some of  the leading companies giving tough competition-

The demand for subscription billing systems are spiralling upward creating new opportunities for the market leaders and new entrants. Furthermore, the COVID-19 outbreak has given a further impetus to the online businesses and digitization in every other industry- education to healthcare. As the trend continues to persist in the following years, the global market is expected to flourish consistently while making the competition stricter for the unicorns as well as leaders in these fields.

Planning to start your own subscription business? Or, want to grow your existing ones? Make sure your billing system offers you more than just automating your billing cycles.