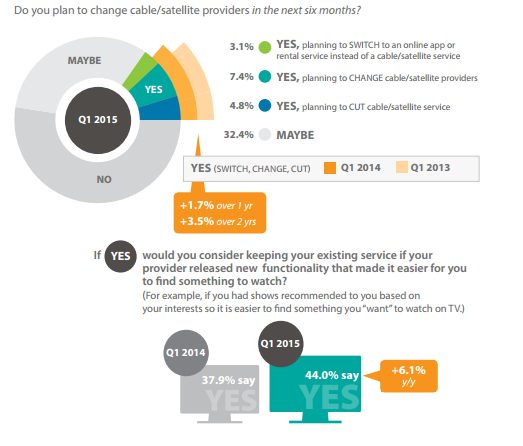 It is no surprise that most Americans do not like their pay-TV service, whether it is delivered by cable or satellite. According to the latest report from the American Customer Satisfaction Index (ASCI), subscription-TV companies are tied with Internet service providers for the lowest customer satisfaction score among all industries. ASCI attributes pay TV’s lowly status to poor customer service and high prices.

So are consumers mad as hell and not going to take it anymore? Nearly a third are considering it, according to a recent report from Digitalsmiths, a TiVo company, on video trends in the first quarter of 2015. Some 32.4% of all current cable, satellite and Internet (IPTV) video subscribers say they are “on the fence” about keeping their subscriptions. The Digitalsmiths survey found that nearly 60% of pay-TV subscribers are paying more than $100 a month for bundled services.

The availability of more limited services like Sling TV from Dish Network that have a more limited selection and a much lower price is becoming more widely known among consumers. Among subscribers, 4.8% are planning to dump cable/satellite service altogether, 3.1% plan to cut the cord and switch to an online video on demand distribution service, and 7.4% are planning to change pay-TV providers.