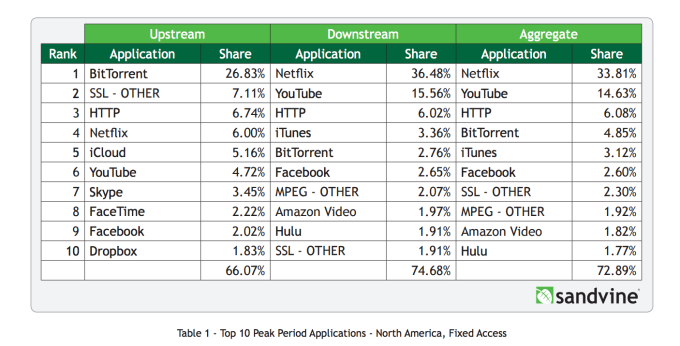 A new report released today shows the continued domination Netflix has on North American Internet traffic patterns. According to broadband networking company Sandvine, which periodically releases its findings on web usage, Netflix now accounts for 36.5 percent of downstream traffic on fixed networks during peak evening hours, which is up from the 34.9 percent reported in the second half of 2014 . In addition, the study found that HBO is also seeing some growth, thanks in part to the launch of its new, over-the-top video on demand service HBO NOW and the popularity of its “Game of Thrones” program in particular.

However, Sandvine notes that overall BitTorrent (file-sharing) traffic is declining, and today only accounts for 6.3 percent of total traffic in North America and 8.5 percent of Latin American traffic.

Other streaming video services are also seeing more modest increases. For example, Amazon Instant Video still only holds a fraction of the bandwidth when compared with Netflix, but its traffic is growing. A year ago, the service had 1.90 percent of peak downstream traffic – now it’s at 1.97 percent.

Elsewhere, YouTube still has a sizable traffic share with 15.56 percent of peak downstream traffic. Hulu accounts for 1.91 percent of peak downstream traffic, and newly launched over-the-top cable service Sling TV accounts for less than 1 percent. However, Sandvine notes that Sling’s service launched only a month before data was collected, so it may be too soon to truly understand its potential impact.