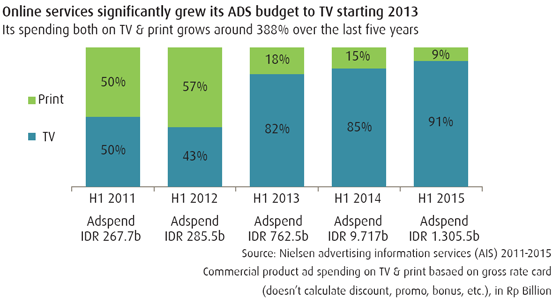 Online companies have joined the list of the country’s top advertising spenders in the first half of this year, spending trillions of rupiah on TV and print advertisements, according to a recent study by market research firm Nielsen.

The study, which sourced data from Nielsen Advertising Information Services, has revealed that Internet-based companies in the country have spent around Rp 1.3 trillion (US$93.9 million) in the January-June period of this year, nearly five times their spending of only Rp 267.7 billion in the first half of 2011.

Home to 250 million people with growing number of Internet and smartphone users, Indonesia is deemed an attractive market by many e-commerce players.

Nielsen’s recent study on advertising spending, which pulled data from commercial ads on 14 national free-to-air stations and over 250 print media, has shown that online companies joined the list of the top 14 ad spenders on free-to-air TVs and video on demand service providers and posted the second highest growth for TV ads spending in the first half.

The online companies’ TV ad spending grew by 43 percent year on year (yoy) to Rp 1.18 trillion in the January-June period of this year, with emerging e-commerce players taking a lead in the spending.