Is the Growing OTT Sector the Future of Television? 04 August 2022 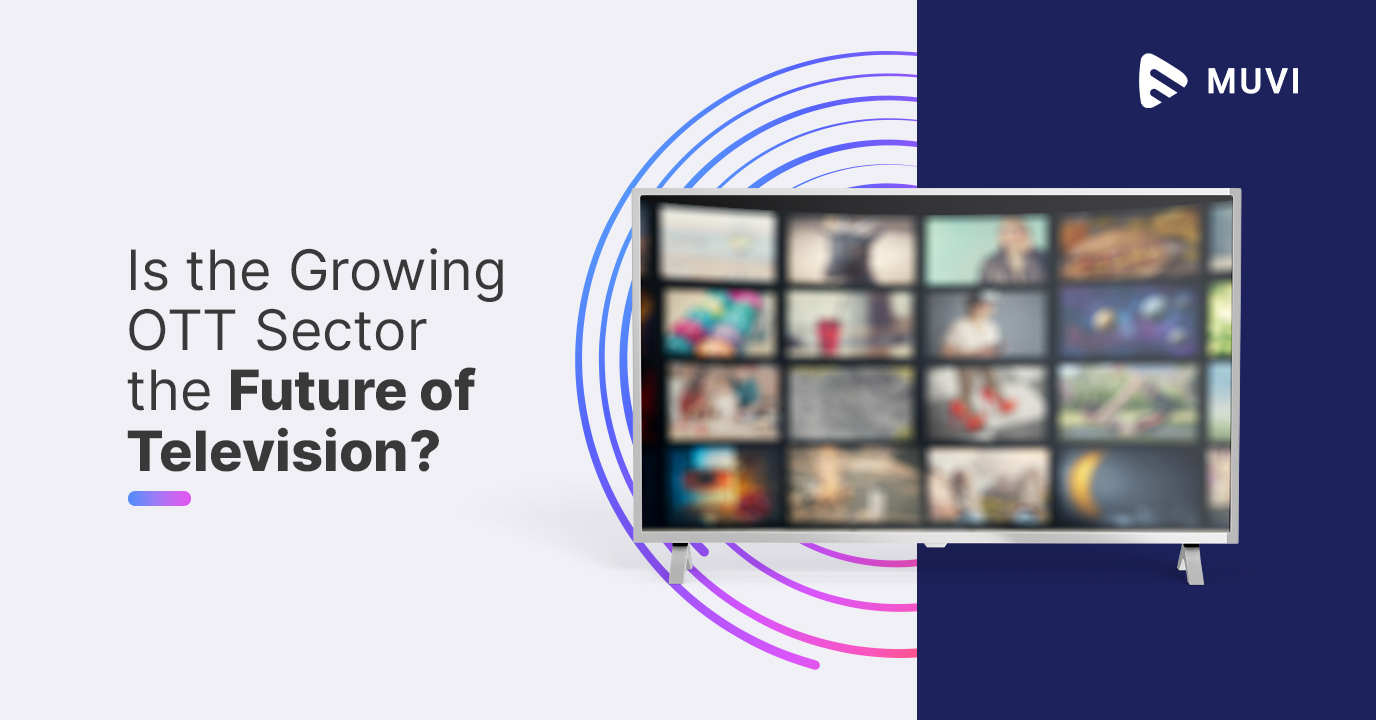 The OTT sector has emerged as one of the fastest-growing sectors in recent years. The growing usage of smart devices and rising consumption of video content remained two of the main driving factors to the OTT sector growth over the past decade. Along with that, there has been a sharp rise in the number of OTT players catering to the fast-paced growth and demand in the OTT industry.

According to a recent market report, the global OTT market was worth US $45.1 billion in 2021 and is forecasted to reach US $123.67 billion by 2028, growing at a CAGR of 15.5%. The OTT sector no longer comprises a few OTT players like Netflix or Hulu, but has turned out to be quite crowded with more than 60 market leading OTT platforms like Amazon Prime, STARZ, XUMO, FUBO, Watch TV, ESPN, and the list goes on.

No doubt that there has been a major shift in the viewers’ watch patterns as OTT platforms are taking over the media and entertainment sector gradually. But, what does it mean for the television sector? Will the OTT sector outperform the traditional television industry in the coming years?

The origin of the OTT concept came into the play with the breakthrough in the traditional television broadcasting system, when in 1994, DirectTV made history as the first satellite TV service. In the next eight years, cable providers invested US $165 billion to upgrade their networks to support high-speed internet. Such advancements were nothing but the foundation stones for the future OTT sector. Within the next few years, the emergence of American media service provider and production company Netflix was another important milestone denoting the origin and evolution of the OTT concept.

Founded by Reed Hastings and Marc Randolph in 1997, Netflix first started as a dedicated subscription-based service for end-users where the audience could access unlimited video content at $19.95. With time, it started drawing even more customers. In 1999, Netflix witnessed 239 million subscribers sign up and its video library was expanded to more than 3000 titles. While Netflix has left a significant mark in the history of OTT rise and growth, the emergence of the other players has made this sector more potential than ever.

With time, several other sectors have come to the picture to cater to the growth of the OTT industry such as –

Apart from catering to the core entertainment requirements, OTT platforms hold the ability to outperform traditional television broadcasting due to its widespread use cases. Let’s have a glimpse at some of the key OTT statistics to estimate the high potential of the OTT sector.

This just gives a few glimpses of the growing OTT sector. But are these enough to ensure the dominance of the OTT sector over the Television industry? Is OTT the future of Television? Or, are both going to co-exist for the foreseeable future? Let’s find the answers!

Television Vs OTT: What’s in Store in the Future?

Before we talk about television vs OTT, let’s have a glimpse of the pros and cons of different types of TV.

When it comes to OTT and satellite TV or traditional DTH (Direct to Home) television, both seem to be unique in terms of their own features, solutions, and advantages. DTH refers to a direct-to-consumer encrypted transmission that travels via satellite.

The consumer uses a tiny dish antenna to directly receive DTH transmission. Unlike a typical cable connection, a set-top box can decrypt this encrypted transmission. Some of the key advantages of DTH include its great signal quality, good coverage, and good censorship controls.

On the downside, compared to OTT platforms, the DTH installation process is lengthy and involves a lot of technicalities, the services are quite slow during severe weather conditions. Also, the video content collection, ease of access & navigation, and most importantly, hassle-free seamless streaming are missing in satellite TVs.

For instance, viewers often prefer cable TVs for affordable pricing, ease of access, and stable & reliable viewing experience. Such TVs also offer bundle plans with high flexibility to choose as per the audience preferences. However, cable TVs have a lot of disadvantages that often makes it not that preferable among the viewers.

One of its biggest disadvantages is – the customer experience often depends on the region-wise cable operators and the existence of such a monopoly doesn’t always guarantee a seamless and quality viewing experience. Another major issue with the traditional cable TVs is the lack of privacy on the Internet, when you bundle cable TV and wired internet. Such wired internet operates with a constant IP address, that makes the information like your websites visit and others more vulnerable.

The newer, more contemporary method of providing TV programming to homes is advanced TV, which is the replacement for traditional TV. Advanced TV implies diverse types of non-traditional television which are not viewed via a satellite link, broadcast, or cable.

It comprises Linear Addressable TV, Connected TV, Smart TV, Over-the-Top (OTT) devices, and others. Advanced TVs are more like the advanced versions of the traditional televisions which gives more advantages over cable or satellite TVs. Easy access to a broad category of video content, customized browsing experience, and flexible pricing plans are some of its top perks.

In contrast to the above-mentioned traditional TVs, OTT services allow consumers to pay for the kind of content they want to watch without dealing with DTH or cable operators. The perks like multi-device compatibility, better privacy, flexible monetization plans like pay per view, subscription-based, ad-based, and others are some of the key driving factors to the growing OTT content consumption in today’s digital era.

Another important factor is – the rising usage of the internet which is driving more people to opt for the hassle-free viewing experience over the OTT apps and websites. While the rise of OTT platforms lets the viewers realize the unlimited advantages it offers over the traditional television systems, the introduction of advanced TVs blurs the line between OTT and television.

OTT Vs Traditional TVs: Our Verdict

The introduction of the OTT concept has definitely taken the entertainment industry by storm years ago. And there is no looking back. Not only has the OTT sector emerged as a whole new means of personalized entertainment, but it is also revolutionizing to a part of the traditional television sector drastically.

The target audience plays an important role in determining the success of any industry/sector. And the same applies to the traditional TV and OTT industries. For the younger generation, OTT platforms tend to be a preferable choice over linear or advanced TVs.

Research says that 15 to 34 years old viewers form the majority of the OTT audience around the globe. With the rising usage of smart devices and the internet, this tendency is only likely to grow further in the near future.

Another major factor that differentiates the future of TVs from OTT is – the compatibility. OTT apps and websites are definitely ahead in this competition being compatible with a broad range of devices.

This also caters to the ease of access and portability factors that enable the viewers to watch the OTT series, shows, movies, and others anywhere and anytime they want. Traditional TVs, on the other hand, definitely lack this facility.

So, who is the winner? OTT or TV? It depends on several factors. For various geographical locations, precisely, for various areas – rural and urban, it keeps changing. In many of the rural areas, people don’t have access to steady internet services. This gives a reason to the linear TVs to dominate in such areas.

On the other hand, a majority of the urban population is inclined towards using the internet that makes OTT more popular in such areas. However, with the provision of better access to internet services across diverse geographical locations, this scenario is likely to be changed as well.

One hand, OTT is replacing the traditional TVs around the globe significantly, but on the other hand, the OTT concept is upgrading the viewing experience through advanced TVs. For the business players, OTT is definitely a lucrative sector that lets one target a wide pool of global audiences across demographics, opens the path to monetize through different revenue models, and leverage the rising penetration of smart devices and internet usage. So, in both ways, the growing OTT sector tends to be the future of television.

As discussed above, OTT market growth is skyrocketing for certain reasons. With digitization taking over the globe, you can only expect it to lead the way to higher growth scope. To start your journey, and grab the low-hanging opportunities in the OTT sector, now is the best time to launch your own OTT platform.