What are the Differences Between Android TV and Fire TV? 13 October 2022 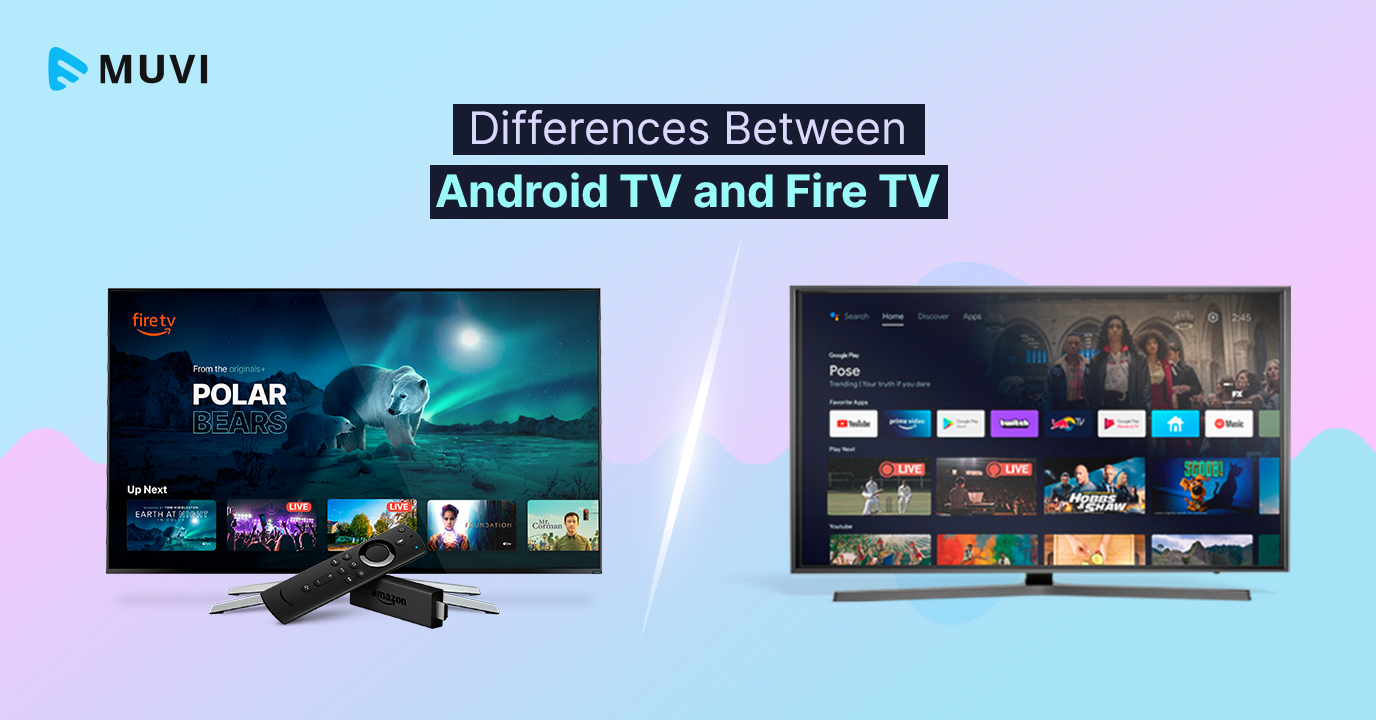 Android TV and Fire TV both have been high on demand around the globe due to their several advantages such as simple to use, great compatibility, give access to a wide pool of apps, advanced voice search and other features, to name a few.

As revealed by Google, the Android TV OS including Android TV and Google TV has over 110 million active devices as of 2022, while the spike in usage and ownership for Fire TV was nearly 30% in 2020 and is subject to rise further.

An Android TV refers to a TV with an Android operating system. Precisely, Android TV is an Android-based smart TV OS (Operating System) developed by Google that was first released in June, 2014.

Android TV OS is applicable to diverse devices such as digital media players, soundbars, set-top boxes, and television sets. Android TV is considered a successor of Google TV and there have been several releases since 2014 such as Android TV 10 released in December, 2019, Android TV 11 in September 2020, and Android 12 for TV in November, 2021.

Released in April, 2014, Amazon Fire TV refers to a set of microconsoles and digital media players that are developed by Amazon. Basically, it is a media streaming device that can transform your TV viewing experience by turning your TV into a smart one.

In 2018 Amazon introduced Fire TV Recast, an over-the-air television digital video recorder that is used for viewing purposes with Amazon Fire TV and Amazon Echo Show devices. However, it was discontinued in August 2022.

Android TV and Fire TV differ from each other in several ways as shown below.

Two of the major differentiating factors between Android TV and Fire TV are their software & apps. Equipped with more than 700 million shows and movies from diverse apps like Netflix, Amazon Prime Video, Disney+, and others, Android TV can be your choice if you are more inclined to watch Google Play Store app content. Also, you can watch Apple TV+ content on Android TV. Not only does it come with Google Assistant that executes voice commands easily, but lets you easily cast videos, images, music and others from your preferred devices to your TV through its built-in Chromecast.

Amazon Fire TV on the other hand, runs on Fire operating system that is based on Amazon’s Android Open Source Project and has mainly three versions – Fire OS 7 which is based on Android 9, Fire OS 6 based on Android 7.1, and Fire OS 5 based on Android 5.1. Fire TV offers a range of apps such as Peacock TV, Pluto TV, Paramount+, and HBO Max, to name a few. It comes with Alexa and also, Amazon Fire TV Stick functions similar to chromecast – you can simply plug it into the HDMI (High-Definition Multimedia Interface) port of your TV to turn it into a smart TV. From a developer perspective, Fire TV lets you easily build and publish your apps for your audience.

Android TV and Fire TV both come with their respective ecosystems, their pros and cons. As stated in a recent market report, the global Android TV market is set to reach US $231 billion by 2026 while growing at a CAGR of 20% through 2026. With the spiking demand in the commercial, industrial, and residential sectors, the Android TV ecosystem is taking the spotlight for the streaming market players to utilize the upcoming growth scope this market offers. Furthermore, as it supports both Android and Apple TV+ and Apple TV content, it lets you target both the ecosystems.

User interface plays an important role in determining the user experience, engagement and ease of access. Android TV and Fire TV both stand out from each other in terms of UI (User Interface). Android TV comes with a neat and easy-to-navigate user interface that includes a simple menu with Search, Home, Discover, and Apps. The apps, shows, and movies are displayed in the forms of streamlined rows with the advertised and favorite content at the top. You can easily discover content of your preferences from the discover tab as well as can get personalized recommendations for various apps, shows, and movies. Also, you can easily customize the Android TV home screen through a few button clicks.

Fire TV also comes with a simple and catchy user interface that includes three main menu items – Home, Find, and Live. You can browse through the lists of apps, shows, and movies as well as the lists of recently watched movies, shows, and sponsored content. Also, you can easily search your preferred content or choose from the recommendations. However, in terms of flexibility and customization, Android TV’s UI is better than Fire TV.

Fire TV’s Alexa gives a tough competition to Android TV’s Google Assistant while both of them come with their own pros and cons. Be it launching an app, controlling the volume, or searching for a new show or series, both Android TV and Fire TV’s voice control feature helps you execute them with ease.

Google assistant is better in terms of AI-powered operations, while Alexa also comes with its competitive voice assistant feature. Through voice control, you can execute multiple tasks starting from knowing weather reports to playing music and more. Also, both these virtual assistants let you transform your home into a smart home where you can easily control your lights, appliances, thermostats, and other WiFi connected devices while watching your favorite shows.

Android TV vs Fire TV is one of the mostly discussed topics among the viewers as well as the streaming market players. While many consider the Android TV ecosystem and growth opportunities to be superior to Fire TV, both have their own advantages and unique perks. As a streaming market player, you can opt for any or even both of them to expand your reach, scale your business, and increase your profitability.