What are the Differences between WebOS and Android TV? 19 November 2021 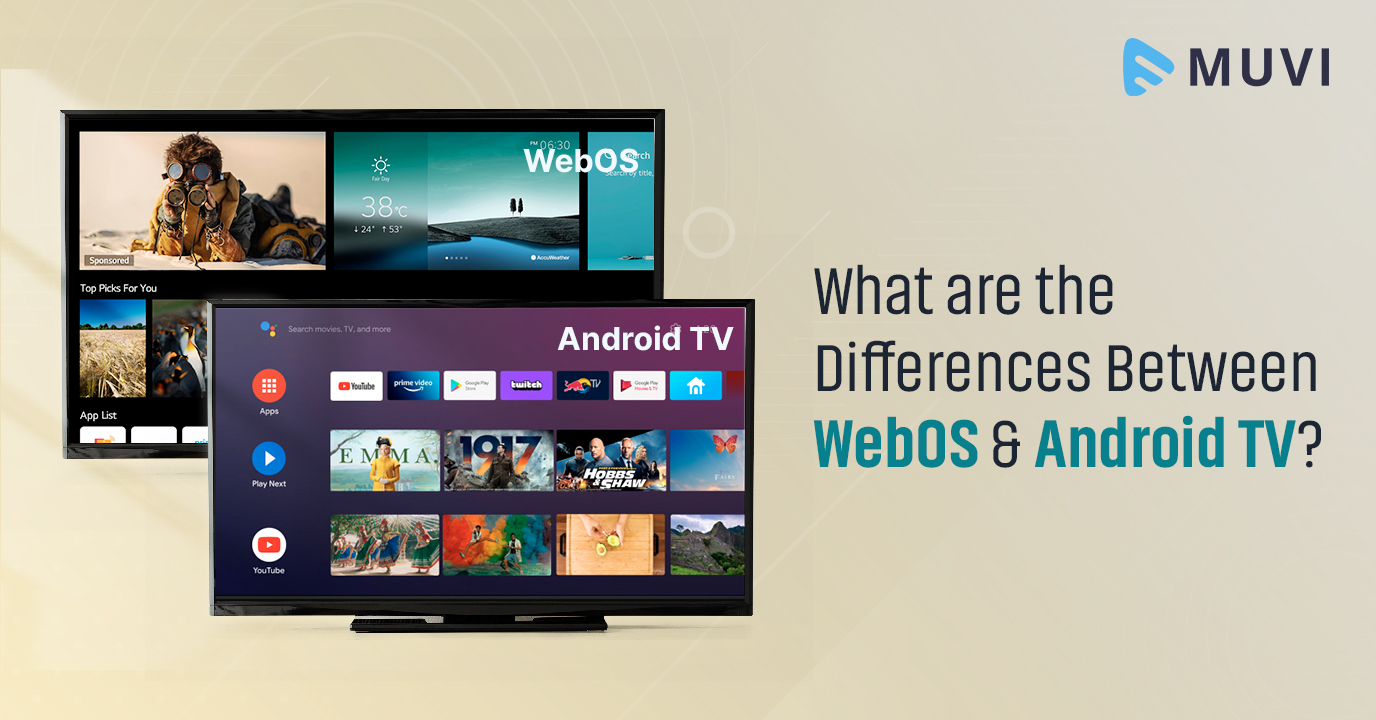 In this era of smart TVs, Android TV and WebOS are two of the most popular names you must have heard frequently.  While both of these are operating systems for smart TVs and have many of the features in common in an obvious way, they are quite different from each other. No matter whether you are operating in the streaming industry or love to stream on smart TVs, you should know the differences between WebOS and Android TV to make better decisions. And in this blog we will give you a clear idea on this.

So, first let’s see what are these WebOS and Android TVs?

What is an Android TV?

An Android TV is a smart TV operating system that is based on Android and developed by Google for digital media players, television sets, set-top boxes etc. An Android TV lets the users get access to various apps, and content they get on their Android phones. Starting from streaming apps like Netflix to single player, multi-player, online and offline gaming, voice search- users can experience the enhanced version of all available in Android phones in the big screen through Android TVs.

People often tend to confuse Google TV and Android TV. Note that, Google TV delivers content, recommendations etc., while Android TV is the platform on which they get delivered. Simply put, Android TV is a smart TV platform built by Google around the Android OS (Operating System) where the users can stream both paid and free content online.

What is a WebOS?

WebOS is a Linux based smart TV operating system built by LG tv app development. LG WebOS lets the users get access and control to the more advanced features and connected devices through a Graphical User Interface (GUI).

Initially, WebOS was developed as a mobile OS by Palm in 2009 and since that time it has been used in many Palm and HP smartphones. However, LG purchased it in 2013 and modified it as a smart TV operating system.

So, Google’s Android TV and LG’s WebOS are two of the most popular smart TV operating systems in the market. And before you opt for one, there are a set of differences you need to be aware of-

The user interface is the first noticeable factor that distinguishes between an Android TV and WebOS. While both of them have gone through changes over the years to come out to be easily comprehensible, each of them have their unique representation. For instance, in WebOS, the list of content appears as a ribbon-like customizable launch bar at the bottom of the screen that contains the list of apps, TV settings, features etc. While in Android TV, the content rows occupy the home screen of the smart TV.

In Android TV, if one app is opened and you want to open another app, you need to close the first app and go to the home screen. But in the case of WebOS, you can get access to the launch bar anytime you want even if another app is opened. As you can see, it’s easier to navigate in WebOS, but the learning curve is steeper in this case.  Another prominent difference is- the Android TV interface is more similar to the Android smartphones while the WebOS is not so.

Also Read: How to Create an Apple TV app?

When it comes to smart TVs, remote controls play an important role in terms of design, functionality, operational features, ease of use etc. And both Android TVs and WebOS come with their own unique remote controls that make them stand out from the crowd. The LG’s magic remote control comes with point-and-click functionality that makes the navigation much easier. On the other hand, Android TV remotes are more basic and easy to operate.

For any smart TV, app selection is vital as it is one of the most important purposes of using it.  Be it the collection of apps, or type of content in those, both Android TV and WebOS are quite different from each other. In Android TV, the users get access to a more extensive content library of Google Play store, while both of them offer a wide variety of popular and exclusive content to the users. Android TV users can also sideload the apps that are not available on Google Play store. But for WebOS, users don’t get this facility.

As you know, screencasting lets you mirror the content playing on your smart devices to a bigger screen. While all smart TVs have this feature, the technology varies for different operating systems. For instance, the SmartShare feature of WebOS lets you watch all the multimedia content on TV. On the other hand, Android TV’s built in Chromecast technology allows you to share content from the apps supporting Chromecast like YouTube, Netflix, Disney+, Hulu, Prime Video etc.

Android TV and WebOS- both have their own pros and cons. WebOS has a more simplistic approach in terms of UI, navigation etc., while Android TV comes with its own set of perks like wider options for Google Play apps, sideloading, and others as discussed above. However, while opting for Smart TVs, users focus on not only the OS, but design, hardware, price etc. and you should keep this in mind while launching your WebOS or Android TV app development.

Muvi, the all-in-one OTT platform provider lets you launch your own fully featured, white labelled Android TV and WebOS app easily. Some of the exclusive perks offered by Muvi include a fully managed solution, full revenue share with you, multiple monetization options & one click set up & launch!