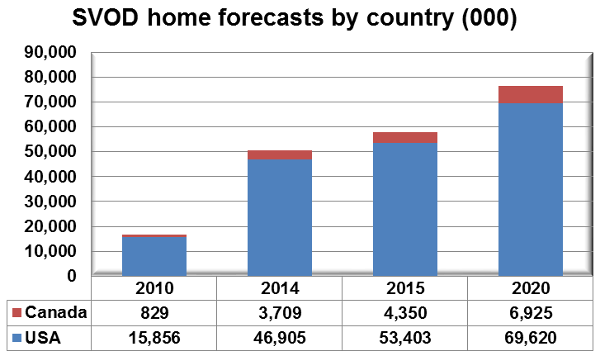 North America already had 50.6 million SVoD homes [for movie and TV services only – excluding sports] by end-2014 – or 38.8 per cent of TV households and 48.1 per cent of fixed broadband homes, according to a report from Digital TV Research. The Americas OTT TV & Video Forecasts report estimates that this represents considerable growth since 2010 when there were 16.7 million SVoD homes (13 per cent of TV households). Therefore the North American region is the world’s most mature for SVoD.

OTT TV platforms and video rental/pay-per-view revenues will expand rapidly, climbing from $169 million in 2010 on to $591 million in 2014 and to $999 million in 2020. Movies will be the main earner; providing $715 million by 2020. TV box sets becoming a more popular promotional tool than single episodes.