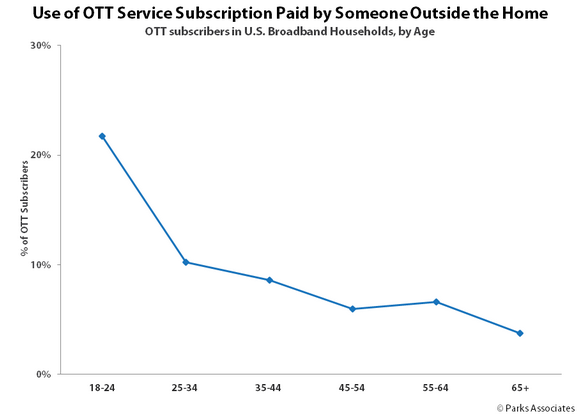 Parks Associates announced new digital media research today that finds OTT video service credential sharing will cost the industry $500 million in direct revenues worldwide in 2015. The report The Cost of Piracy shows 6% of U.S. broadband households use an OTT video service that is paid by a person living outside of the household. It also analyzes usage and impact of live-streaming applications like Meerkat and Periscope, which are used to “share” broadcast events such as Game of Thrones episodes and the Mayweather-Pacquiao fight.

The Cost of Piracy finds 20% of OTT users aged 18-24 use an OTT video service paid by someone outside the home, the highest of any age group. Only 10% of OTT subscribers 25-34 admit to this behavior. Previous research, reported in the whitepaper “Uprising: College Students & Changing Video Preferences,” found that few respondents expressed guilt or embarrassment over using someone else’s video service credentials.