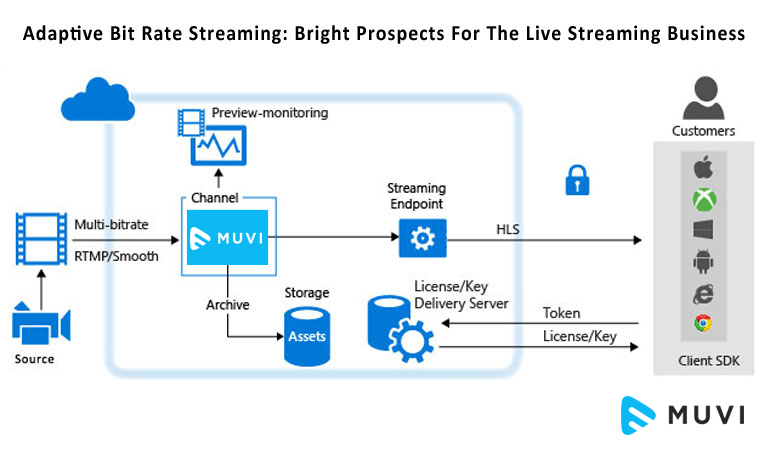 During the early 2000s the internet saw a booming increase in network bandwidth. Together with better media compression algorithms and more powerful personal computer systems streaming delivery of media had become possible. The term streaming is used to describe a method of relaying data over a computer network as a steady continuous stream, allowing playback to proceed while subsequent data is being received. This is in contrast with download-and-then-play, where playback starts after the data has completely been downloaded. Instant playback is the main advantage of streaming delivery as the user no longer has to wait until the download is completed, which can take hours over slow connections.

Despite advancements in core and last mile bandwidth in the past few years, the bandwidth requirement of video traffic is technology differs from the others. To tackle this, a new streaming technique called adaptive bit rate streaming or simply ABR. It was created by the DVD Forum at the WG1 Special Streaming group in October 2002. WG1 co-chaired by Toshiba and Phoenix Technologies, with the collaboration of tech and movie giants like Microsoft, Apple Computer, Warner Brothers, 20th Century Fo, Disney, and Akamai.

With ABR streaming, as a connection capacity changes over time, the video carried over that connection can vary its bit rate and therefore its size to adapt to the network conditions. The player or client and the server exchange discrete information on the control plane throughout the transmission whereby the server exposes the available bit rates for the video being streamed and the client selects the appropriate version based on its reading of the current connection condition.

Adaptive bit rate is fundamental to helping accommodate the growth of online video delivery over unmanaged (OTT) and wireless networks. Here’s how:-

Adaptive streaming isn’t new: Companies like Netflix and Hulu have used the technology for some time to optimize their video streaming experience. But YouTube had some unique challenges to solve when it rolled out its own implementation. For example, Netflix often starts with a lower-bitrate stream and then slowly scales up, which is why it can take a minute or so before full HD quality sets in.

That approach doesn’t really work for YouTube videos that only last a minute or two. YouTube tends to be more aggressive in sending out higher-quality video, and then scales down the video if necessary. The site also makes use of the fact that you often watch more than one YouTube video in a row, and optimizes your bit rate across an entire session.

The results of these efforts have been encouraging. YouTube has seen buffering reduced by 20 percent since it launched adaptive streaming for its desktop player. That’s why the company is now taking the technology to TVs and mobile devices.

A streaming video business today is multi-faceted and can require a rather expensive upstart in its gestation period. However lucrative may the future look like, it still does not pay the rent and your salaries. The key is to start low, and not slow. What if there was a video streaming solution that let you stream videos on-demand and live too? What if you paid ‘Zero’ to start the video streaming business, paid only for using the on-demand streaming and had live streaming for ‘FREE’?

That’s where Muvi jumps in to the act with its Video Streaming Platform. A platform supporting DRM across devices, an embeddable video player, live streaming (HLS) support and all that with a ‘Zero CapEx’!

Learn more about Muvi and to Signup for their 14-days Free Trial here.

Check out the Live Streaming demo and use any working HLS feed to test it out.