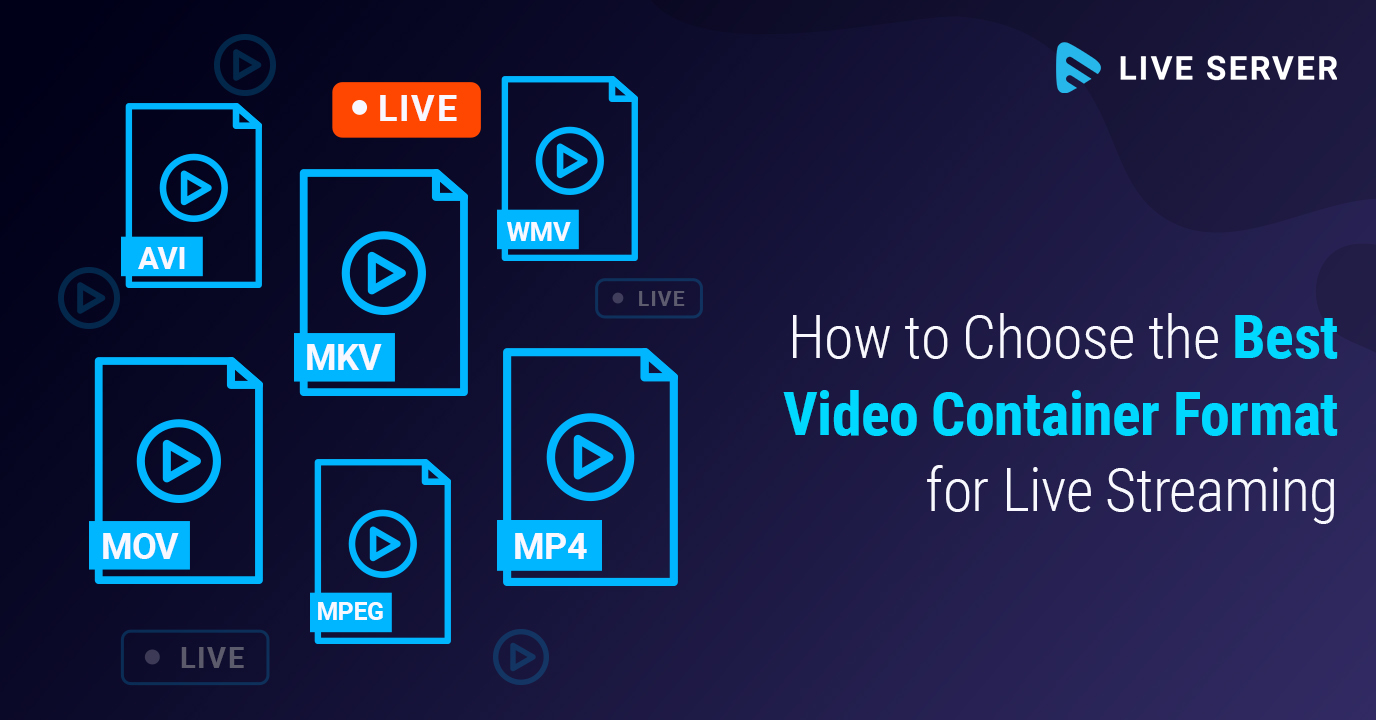 If you believe in the power of live streaming to grow your business and are wondering which video format would work best for broadcasting your next live event, you have come to the right place. This blog will help you choose the right video format for seamless live video streaming of your live event irrespective of size.

There are basically two pointers when it comes to choosing the best video formats suitable for live streaming, namely – playback devices and live streaming protocols. But first, let us look closer at the concept of video formats.

What are Video Formats?

Video format is a type of a file format, or in other words, a container for storing compressed audio and video data, which sometimes includes subtitles as well.

Generally speaking, the most used video container formats include MP4, AVI, FLV, WMV, MOV, and MPEG. While MP4 is best suited for streaming to online video platforms, HTML5 works best when you have to embed a video on your own website.

Why do Video Container Formats Matter?

Let’s get this straight- the choice of a container format is equally significant as the compression standards present inside the video format. This is because a compression standard when paired with an incompatible video container can add the surplus expense to your video streaming workflow.

Take into consideration the AVI video container format which has over 15 different compression standards. Also, there exist both Type 1 and Type 2 AVI containers whereby open-sourced editing solutions mostly opt for Type 2 while non-linear ones go for Type 1.

Confusing, isn’t it? Well, we are here to clear all your confusions. To help you decide, let’s jump straight into the different parameters for choosing the best video format for live streaming.

Created by Macromedia, RTMP had a few advantages. However, the main benefit of RTMP is the fact that it can provide low latency delivery via TCP, which is a less popular and less-aggressive internet protocol requiring a tiny amount of latency wherein both the sender and receiver can confirm when the video has been delivered.

Although years after Adobe deprecated Flash, RTMP is still widely used today and it has been advanced to handle content-based video codecs such as AVC or H.264. As suggested by its name, RTMP boasts of real-time delivery as a specialized protocol.

RTMP works like this- it sends a single low-latency stream to a physical media server or cloud-based one, where it is transcoded and repackaged for consumption as part of an HTTP delivery workflow.

A relatively new and advanced protocol increasingly becoming a popular choice is WebRTC where RTC stands for Real-Time Communication. Designed to work natively in a web browser, WebRTC ousts the requirement for a plug-in architecture like Flash.

The best part- WebRTC does not use a container format at all. It instead streams using the connection between browsers by encoding data directly from one peer to another.

Released in 2009 by Apple, HLS has since become the most widely-used streaming protocol.  Initially, HLS was only supported by iOS. However, HLS has now become a proprietary format and almost every device supports it. HLS depends on fragmenting MP4 video files into small segments. These fragmented MP4 video files often use AAC audio codecs and AVC or H.264 video codecs.

MPEG-DASH is the latest and by far, the best alternative of HLS. Created by Moving Picture Experts Group between 2009 and 2012, it uses standard HTTP web servers like HLS. DASH is short for Dynamic Adaptive Streaming over HTTP which means that like HLS, it’s an adaptive bitrate protocol. DASH is codec agnostic and supports almost every video codec available including H.264, H.265/HEVC, VP9/10, and WebM.

We have covered a few areas including live streaming protocols and playback devices and the common intersection point brings our attention to one video format- variations of the MP4 file format.

And, while the MP4 format will handle HEVC (also known as H.265), the current primary use for MP4 files is AVC video and AAC audio tracks.

Muvi Live supports low latency video delivery across a variety of formats including MP4, MOV, MKV, FLV, VOB, M4V, AVI, 3GP, MPG. ensuring maximum video scalability. If you are looking out for a live streaming platform for your business, we recommend you to checkout Muvi.

We’d love to set you up for a 14-day Free trial to explore more live streaming opportunities!