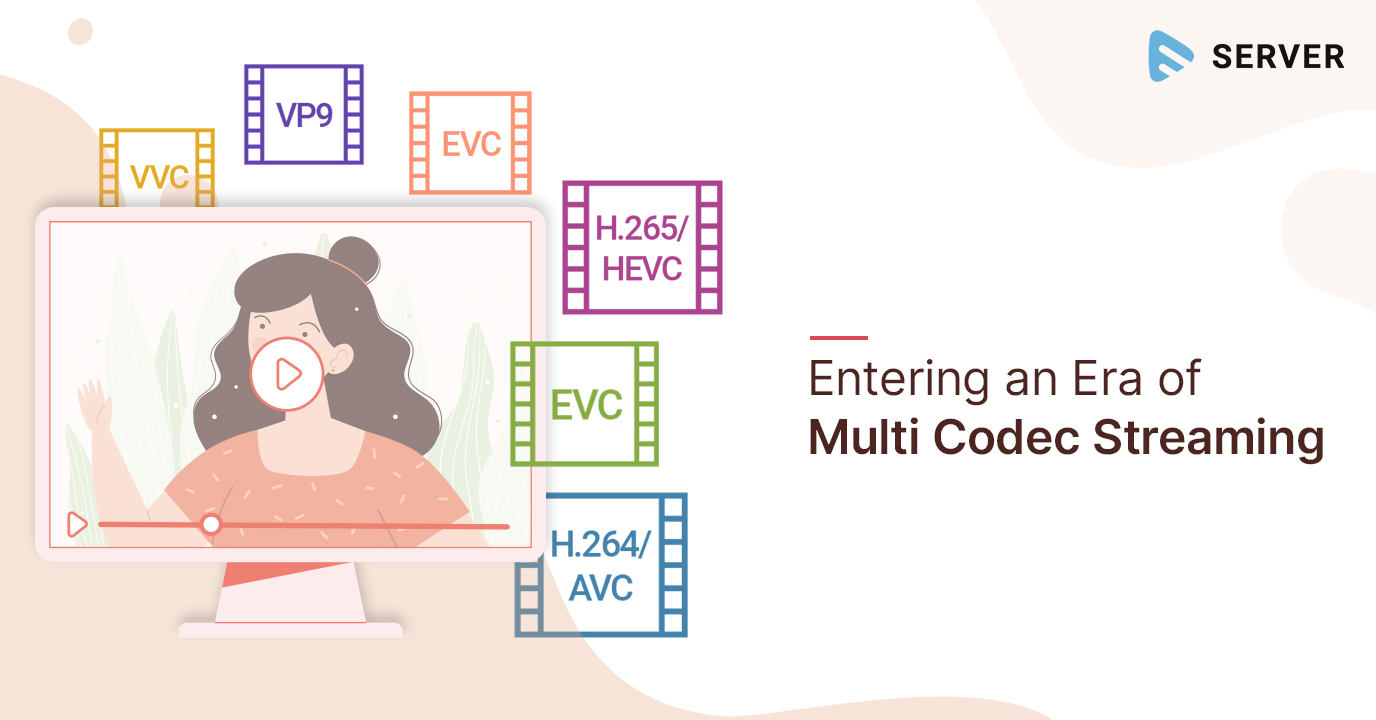 As we enter 2021, we can acclaim without doubt that H.264 (also known as AVC) is ubiquitous in the world of video streaming. Nearly every device and operating system support AVC decoding either on hardware or software. However, although AVC is widely supported, we cannot deny the efficiency in terms of the compression rate of the next-generation codecs. In this blog, we will analyze the concept of multi-codec streaming and how it can be implemented to support high-quality video streaming.

Living in a Multi Codec World

We are living in an era where multi-codec streaming and video distribution have grown into a huge ecosystem. This condition has led to the development and growth of new video formats and new standards. MPEG, joined by ITU-T, has been extremely successful in bringing together companies, technology, and IPR leading to successful standards such as MPEG-2 and H.264/AVC, and dominating the ‘traditional’ broadcast business. Also, the concept of adaptive bitrate streaming has led to AVC becoming the most preferred format for streaming services.

However, the last few years have witnessed increasing fragmentation in video codecs again. Experiments conducted by Netflix demonstrated that HEVC or H.265 can deliver up to 50% bitrate savings when compared to previous generation codecs like H.264/AVC. HEVC has now become the preferred codec for delivering  premium content. But at the same time, a parallel move towards formats such as VP9 and AV1 has gained a foothold. VP9 is another great codec when it comes to reducing bandwidth consumption( up to 50% compared to AVC) or delivering higher quality with the same bitrate. VP9 is supported on multiple platforms including Google Chrome, Firefox, Microsoft Edge and Android devices. Recent years have also seen development in new formats such as VVC, EVC, and LCEVC.

A Quick Glance at the Prevalent Codecs

H.264 or AVC is the most commonly used codec in the multi codec streaming ecosystem by video producers. This codec, due to its motion-compensation-based video compression standards is highly recommended for recording, compression, and distribution of video files across multiple devices and is present everywhere, with decoders available for pretty much every platform and mobile device.

Developed by Google as an alternative to HEVC, VP9 is royalty-free and an open-source codec. The differences between the two codecs owe to the strengths and weaknesses of their compression algorithms due to which VP9 produces more consistent or more reliable streams, while HEVC produces videos of higher quality.

An open-source, royalty-free video codec, AV1 is specifically designed to improve the encoding and decoding efficiency by 30% over HEVC’s performance. It is developed by Alliance for Open Media (AOM), along with the support of Google, Amazon, Cisco, Microsoft, Mozilla, and Netflix.

Developed by MPEG, VVC is a competent successor of HEVC and AVC. VVC is predicted to achieve an estimated 50% bit rate reduction versus HEVC for equal subjective video quality.

MPEG-5 Essential Video Coding (EVC) is a future video compression standard that is expected to be completed in 2020-2021.  It is backed by Huawei, Samsung, Qualcomm, Divideon. The standard is to consist of a royalty-free subset and individually switchable enhancements.

MPEG-5 Part 2 LCEVC or Low Complexity Enhancement Video Coding is being introduced with the aim of increased compression efficiency for existing codecs by using a base bitstream and an enhancement bitstream. LCEVC makes use of an enhancement layer which, when combined with a base video encoded with a different codec, produces an enhanced video stream.

Get a detailed analysis of the various codecs and their uses by reading our blog AV1-HEVC-VP9: Which is the best quality video codec for online streaming

How to Choose Formats for OTT Deployment?

Multi codec streaming is here to stay, at least for some time. Therefore, OTT service providers should be fully equipped to offer multiple formats, to have the highest QoE for every platform and user. However, there’s a catch here. Service providers supporting 2-3 formats are quite sustainable. But when it comes to supporting 4-5 formats for delivery across multiple platforms, the process becomes very expensive and leads to other problems like high storage costs, implementation headaches, and degrading cache efficiency on your CDN.

For most video streaming providers, the ultimate goal is reaching out to maximum customers across platforms with the highest QoE, at a reasonable cost. Therefore, choices have to be made, accordingly. We would advise here to offer AVC streams mostly. If high-quality UHD streams need to be offered, HEVC might be a good choice, to reach high-end mobile devices. For Android devices and browsers, both VP9 and AV1 is a good choice, with the scales weighing heavier on AV1 as it promises an even wider reach and additional compression performance gains.

What Does the Future Have in Hold?

With content consumption increasing due to the pandemic, most content providers are trying to reduce their streaming costs. Dropping the bitrates is one way of reducing your streaming costs, but, then one can’t compromise with video quality when you have such top-notch competitors in the streaming market like Netflix, HBO, Amazon, and Hulu.

Considering OTT streaming, AVC is still dominant, and it’s considered the safest fallback option, due to its device compatibility factor. However, one cannot negate the use of HEVC in multi-codec streaming. HEVC usage has been relatively limited, as, typically, it is considered a premium content format, including 4K and HDR/WCG content. Now coming to VP9, given its large decoder support, the codec is still relevant. Netflix, Twitch, and YouTube have already deployed VP9 leading it to occupy a reasonable share over the Internet. However, one cannot negate the value of AV1 for its encoding efficiency. We expect that in a couple of years, AV1 will become dominant for Internet video traffic, and HEVC for premium content on iOS devices.

Similar to 4K and other high resolution formats being a driver for HEVC adoption, 8K could be an incentive for VVC adoption. Given the technological advancements with each passing year, the industry will move slowly towards such high resolutions, especially for sports live streaming.

Because proprietary codecs and video containers exist, it’s important to deliver multiple versions of your live streams to viewers. With Muvi Flex you can encode your videos with different codecs like H.264/AVC, H.265/HEVC, VP8, VP9, AV1.