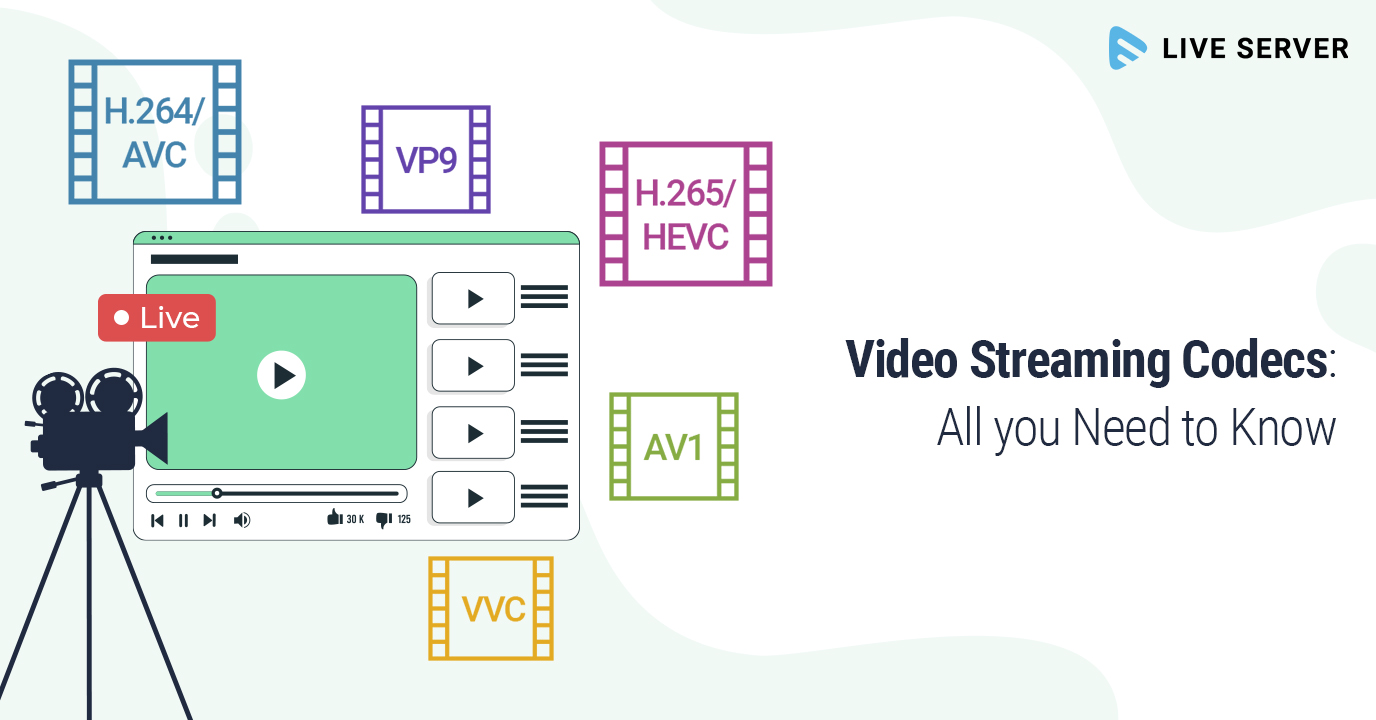 Did you know that Netflix users stream 97,222 hours of content every minute, courtesy, codecs?

One of the basics of live streaming is getting to know your audio and video streaming codecs better. As a professional broadcaster, getting a better grasp of the technology that brings your broadcasts to life makes sense since these codecs are the reason we can so easily stream audio/videos and video chat with our loved ones, even with limited bandwidth. In the next 5 minutes, you will be getting all the information you need about video streaming codecs and their role in live streaming.

A portmanteau  of ‘coder-decoder’ or ‘compressor-decompressor,’ codecs, to distribute a video or audio file for playback, perform the function of shrinking or compressing the raw audio/video data into a more manageable size. The video is shrunk considerably (compressing) for storage and transmission and later decompressed for viewing.

At the core, codecs are advanced video compression tools that work on encoding and decoding algorithms. To deliver uninterrupted video streams on a user’s screen, codecs eliminate certain disposable data from the videos and reduce the file size without hampering its overall quality.

Why are Codecs Needed?

When we record a video, it’s actually raw data which is quite rich in information. However, it’s also bulky and unwieldy. The file size of a video is determined by the number of frames per second at which it is recorded and also the resolution. The more the frames and resolution, the heavier it becomes. You can well imagine the file size produced by professional-grade cameras capturing raw footage from a single day of shooting!

Streaming high-quality video streams involve high bit-rate and more data storage. Such files require a lot of processing power to encode and a high-speed internet connection to download for playback. More so, your live streaming audience with their limited internet connection speeds and mobile storage capabilities transforms the task of processing this huge data into a feat next to impossible to achieve.  Here, the need for codecs becomes imperative as they eliminate disposable data and compresses huge files into manageable ones that can be streamed by the end-user at a reasonable bandwidth.

So, as you can see, codecs offer an all-in-one solution for not only shrinking huge file sizes but also addressing the bandwidth issue. Without codecs, video downloads would take three to five times longer than they do now.

What is a Container Format?

Once compressed, the components of a stream are packaged into a wrapper or file format. So, video container format is a type of a file format, or in other words, a container for storing compressed audio and video data, audio codec, video codec, closed captioning, and any associated metadata such as subtitles, size, etc.

Containers “contain” the various components of a video: the stream of images, the sound, and anything else. It is a format specification describing how different multimedia data elements and metadata coexist in files.

Generally speaking, the most used video container formats include MP4, AVI, FLV, WMV, MOV, and MPEG. While MP4 is best suited for streaming to online video platforms, HTML5 works best when you have to embed a video on your own website.

A container format is capable of the following activities:

While both may seem outwardly similar, codecs and containers are quite different in their capacities and capabilities than meets the eye. The main difference is that while codec does the actual job in terms of compressing your video file, the container holds all the components together and determines which programs can accept the stream- it is like the final package delivered for playback.

Since codecs shrink a large file into a smaller sized and manageable one and transmit it over the internet, there is a directly proportional relationship existing between the two. This means that bigger the size and quality of your video stream (when you use HD, UHD, or 4K resolution), higher is the bandwidth requirement.

Today, with most viewers connecting via broadband capable of 1-2 megabits per second (Mbps), most broadcasters/producers encode their video to meet quality and cost concerns. However, in order to ensure an optimal viewing experience of your audience, you can stream your videos at multiple bitrates.

Know the recommended Encoding setting, ideal resolution-bitrate combination in a detailed eGuide – A Must have for every live streaming enthusiasts.

There are many codecs available today including legacy codecs and next-generation ones. We have listed down the most popular video codecs including both the old and the new. While industry leaders continue to refine and develop the latest compression tools, many prefer to deploy older codecs like H.264/AVC for delivery to legacy devices.

The most commonly used codec by video producers, H.264 is also known as AVC or Advanced Video Coding. Developed by International Telecommunications Union and the International Organization for Standardization/International Electrotechnical Commission (ISO/IEC) Moving Picture Experts Group, this codec, due to its motion-compensation-based video compression standards is highly recommended for recording, compression, and distribution of video files across multiple devices.

Well, the H.264 codec has been around for quite some time and may seem to be a bit outdated by now, but this type of compression technology is present everywhere, with decoders available for pretty much every platform and mobile device.

Apart from the streaming industry, H.264 holds a significant penetration in Cable Broadcasting and Blu-Ray disk distributions. Mostly, AVC is combined with AAC audio codec and is stored in 3GP, MOV, F4V, TS, and MP4 Containers.

HEVC is the codec for the 4K era since H.265 compresses 4K videos far more efficiently compared to H.264. Due to the proliferation of 4K content, H.265 is slowly becoming ubiquitous across the video streaming ecosystem. Capable of generating smaller files than H.264, HEVC makes an ideal codec for high-resolution streaming.

Developed by Google as an alternative to HEVC, VP9 is royalty-free and an open-source codec. The differences between the two codecs owe to the strengths and weaknesses of their compression algorithms due to which VP9 produces more consistent or more reliable streams, while HEVC produces videos of higher quality.

Since VP9 is developed by Google, every chrome browser along with Android phones, and even Google’s own video streaming platform YouTube, supports VP9 for seamless delivery of videos to end-users.

Developed by Alliance for Open Media (AOM), along with the support of Google, Amazon, Cisco, Microsoft, Mozilla, and Netflix, AV1 is truly the next-generation video streaming codec. An open-source, royalty-free video codec, AV1 is specifically designed to improve the encoding and decoding efficiency by 30% over HEVC’s performance.

Because of its low computational footprints and quick hardware optimization abilities, AV1 delivers highest-quality real-time videos, scalable to any modern device at any bandwidth. AV1 is still a highly experimental codec but is supported by Firefox, Google Chrome, VLC media player, FFmpeg among others. However, the codec being new, it will take some time before AV1 hardware decoding capabilities are integrated on a mass scale.

VVC or Versatile Video Coding provides a major benefit in compression over HEVC. VVC is predicted to achieve an estimated 50% bit rate reduction versus HEVC for equal subjective video quality.  Application areas especially targeted for the use of VVC include ultra-high-definition 4K and 8K video, omnidirectional video, video with a high dynamic range, and wide color gamut.

We’d love to set you up for a 14-day Free trial to explore more live streaming opportunities!