Must Know Facts and Features of MPEG-DASH 21 November 2022 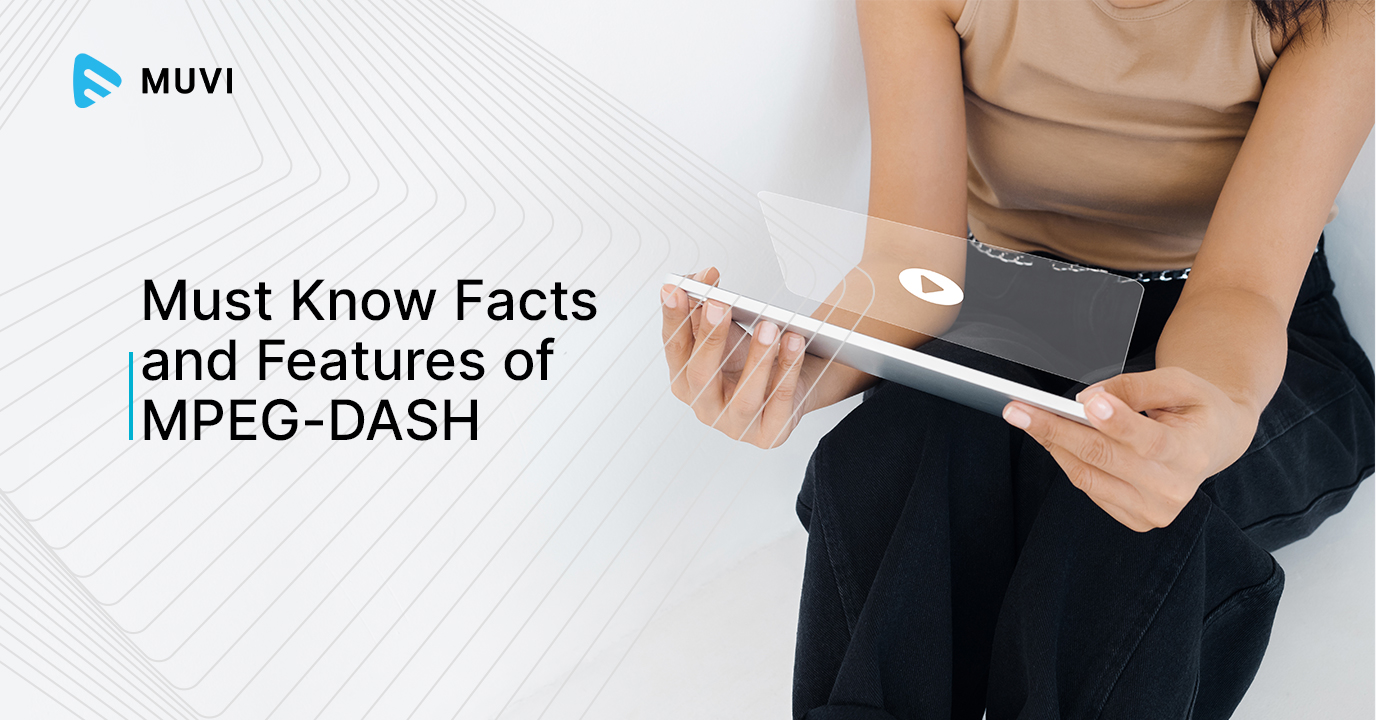 MPEG-DASH is the most renowned video streaming protocol and is popularly used to deliver media either through Video on demand or else live streaming to a wide group of audience on their smartphones, tablets, Smart TVs, gaming consoles, and more. It is not a new term for video producers, live streamers, etc. However, there is still a lack of understanding about what it is, how it works and its implications in the years to come.

A Quick Introduction to MPEG-DASH

MPEG-DASH is an HTTP based streaming protocol that helps deliver video to the end-user from an HTTP server. It splits the video into segments and sends them from web servers to viewer’s devices. In the term MPEG-DASH, DASH stands for Dynamic Adaptive Bitrate Streaming over HTTP. Since it is based on HTTP, any origin server can be set up to serve MPEG-DASH streams.

It is quite like HLS, and it works by breaking the videos down into smaller chunks and encodes those chunks at various quality levels. This makes it possible to stream videos at different quality levels and easily switch from one quality to the other in the middle of the video.

HTTP is referred to as a layer 7 streaming protocol for communicating over digital medium. Web application uses HTTP to send data back and forth in a method that devices at both sides will be able to interpret. This is a kind of two-way communication from different parts of the world through a common language.

MPEG-DASH uses HTTP and it is an added advantage since most of the internet already uses HTTP. HTTP helps the stream go to a standard port that is almost always open. It also ensures that the stream is hardly blocked by any firewall, which can block streaming protocols that use specialized or unusual ports.

MPEG-DASH – How does it Work?

It is the initial step of MPEG-DASH streaming. Here, the origin server divides the video files into several small segments of shorter length. The server also generates an index file such as a table of contents for the video segments. These segments are then encoded in a method that multiple devices can interpret. MPEG-DASH permits the utilization of any encoding standard.

When the end-users start watching the content, the encoded video segments are pushed out to client devices over the internet. In most of the cases, a CDN (content delivery networks) helps distribute the video contents more efficiently.

As an end-user’s device receives the data, it starts decoding it and playing it back. The video player automatically changes its modes to lower or higher quality pictures in order to adjust to network conditions. For example, if the user is currently having a little band-width, the video will play at a lower quality level that utilizes less bandwidth.

With the help of ABR streaming, the MPEG-DASH delivers a stable viewing experience, but also causes a preliminary delay as the individual segments are downloaded. One effective way to address this is to tune latency by decreasing the segment size. Another alternative includes the Common Media Application Format (CMAF).

Major Difference Between HLS and DASH

HLS is another popular streaming protocol that is widely used in the streaming media industry. MPEG-DASH and HLS are quite similar in several aspects. Both run over HTTP, use TCP as their transport protocol, break video into segments with a supplementary index file, and offer Adaptive Bitrate Streaming. However, there are several key differences that differentiates both these protocols, they are:

MPEG-DASH allows you to use any encoding standard whereas, HLS only allows the utilization of H.264 or H.265.

HLS is the only format that is supported by Apple devices but MPEG-DASH doesn’t support playback in Apple devices like iPhones, MacBooks, etc.

Segment length was a huge difference between those two streaming protocols before 2016, when the default segment for HLS was ten seconds. Today the default length of HLS is six seconds, although it can be adjusted from the default. MPEG-DASH segments are typically between 2 and 10 seconds in length, although the optimum length is two to four seconds.

Know the differences between HLS and MPEG-DASH

MPEG-DASH is extensively supported by player companies and is in active progress by an international community. Constant bug fixes, improvements and features make MPEG-DASH an outstanding choice for video streaming. It also supports both VOD (on-demand) as well as live streaming formats.

MPEG-DASH is supported by the android ecosystem, which is vital for streaming to Android phones, TVs, and other devices. Considering that Apple iPhones and Apple TVs are quite pricey to own in various parts of the world, having an alternative for HLS is extremely important.

There are several advantages of using MPEG-DASH for streaming video contents online. The primary advantage is its foundation laid on HTTP.  Every web content on the internet is currently delivered to the end-user via HTTP. There is an implication that the standard web servers can be used to deliver MPEG-DASH streams so your audience will be able to reap the advantages of maximum speed while you would be able to keep the expenditure at an absolute minimum. MPEG-DASH is significantly more efficient for any given bandwidth than any of the other commonly utilized delivery standards.

Another major advantage of utilizing the MPEG DASH protocol is that it is extensively supported by almost all the generally used smart devices, operating systems, or browsers.

HLS is continuing to take the center stage, slowing MPEG-DASH option. HLS remains the best bet while streaming to Apple devices whereas MPEG-DASH would be the best option for Android devices and smart TVs. Luckily, Muvi makes it easy to transmit video into various formats to make sure delivery on any device. Take a free trial to know what streaming protocols Muvi has to offer to you!

Ankit is Content Writer for Muvi’s Marketing unit. He is a passionate writer with 3+ Years of Experience in Content Creation And Development. In his past time, he likes to dance, play football and google various things to quench his thirst for knowledge.