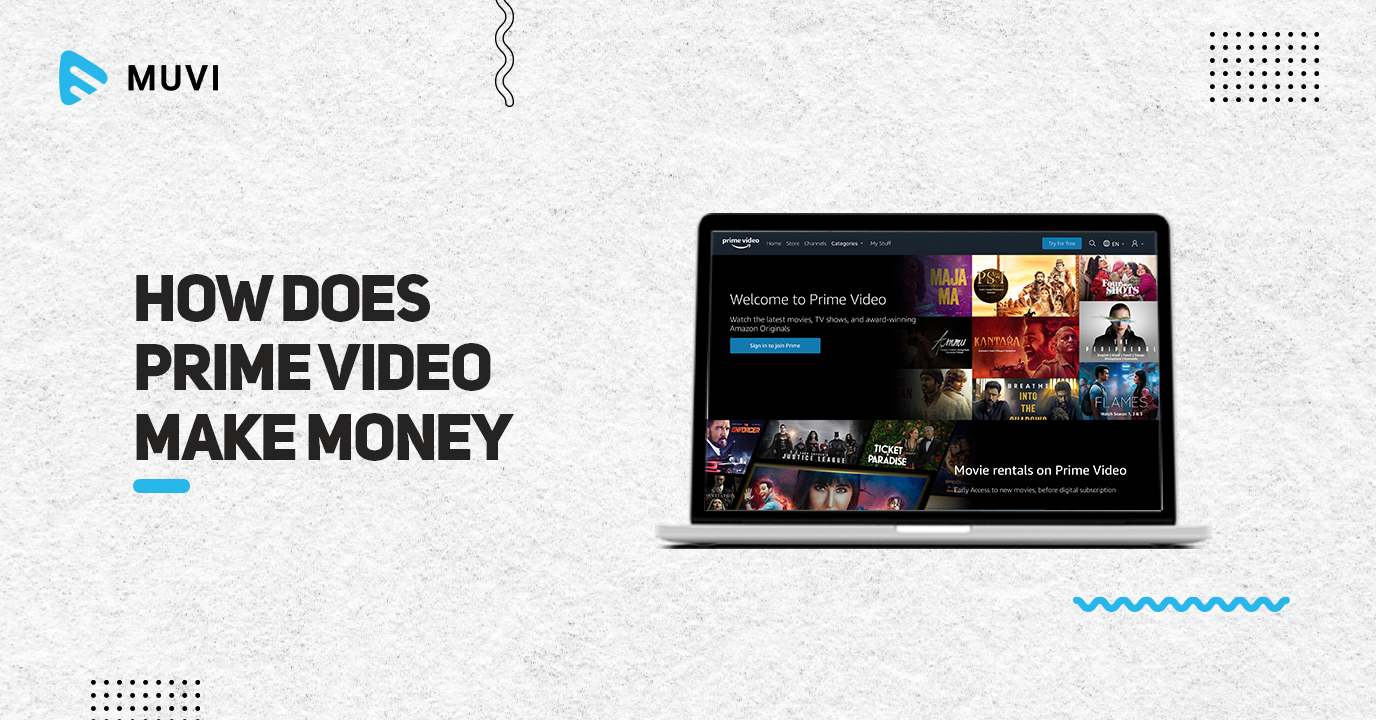 Netflix brought the streaming revolution to the world. It paved the way for cinema to reach television sets without needing traditional IPTV setups. With technology improving and becoming more readily available to people, various video-on-demand (VOD) services emerged in the last 20 years using OTT technology. Amazon Prime, Disney, and Hulu slowly built their customer base and are now significant competitors to Netflix and traditional distributors of IPTV content.

Amazon was one of the early adaptors to enter the streaming market. It launched two offerings – Prime Video & Prime Audio as part of its prime services that were originally meant to provide faster deliveries at a lesser cost per package for a subscription fee. Both Prime Video & Prime Audio services come bundled with the usual Amazon Prime subscription and also as a standalone service, and it occupies the second position in the growing video-on-demand industry.

So how does a streaming service such as Prime Video make money? Before we dive into that question, here are some statistics for our readers about Prime Video.

The numbers suggest that Amazon is spending tremendously to produce and acquire content all around the globe. Several countries have created their original shows for Prime Video and are being broadcast with a lot of viewership. Prime Video earns money in multiple ways that include a combination of earnings from advertising, subscriptions, and rental services. The entire setup can be divided broadly into two segments.

Monetization Model: How does Prime Video Earn from Customers?

Prime video deploys all types of monetization models on its platform. It offers content that comes bundled with the basic subscription price, special screenings that come at a rental cost and lastly, it also runs a variety of ads to generate an additional source of revenue. Here are some examples of the monetization deployed.

This part of the business model of Prime Video is based on subscriptions. Customers pay a fee to access the service, and in return, they can stream a variety of TV shows, movies, and other video content. Amazon also offers a standalone subscription to Prime Video, which is available to non-Prime members for a monthly fee. The subscription prices vary depending on the region you are located in. In the United States, for example, it starts at US $14.99 a month whereas in India you can get the same subscription for a little less than US $2 a month. This subscription lets users access the various movies, tv shows, and other content that is available on the platform. Some content is restricted for a particular region while some may require additional money to access, something we read about in the next section.

In addition to subscriptions, Prime Video also generates revenue through the sale or rental of individual TV shows and movies. Customers can purchase or rent a specific piece of content for a one-time fee, which is added to their Amazon account. Many movies and sometimes even sports tournaments may require you to pay additional fees to access the content. This gets Amazon an additional source of revenue but many times it is a contractual obligation that Amazon may have with the 3rd party. A cricket match for example can have 10M+ consistent viewership in India which means Amazon has to deploy additional resources to broadcast. So, Amazon puts a small fee to give you access. It also puts ads which is the next segment of Amazon’s multiple ways to earn revenue.

Another way that Prime Video makes money is through advertising. The service includes ads in some of its programming, and it also offers targeted advertising opportunities to companies that want to reach a specific audience. Amazon offers multiple advertisement opportunities to people where they can have ads on the videos available on the website targeting specific audiences based on their interests, usage patterns, ages, etc. Amazon earns a whopping amount of money by running ads on its content which also means it enables Prime Video to provide various content services at a lesser cost.

Prime Video, like other streaming platforms, acquires third-party content through licensing agreements with content owners or production studios. These agreements allow Prime Video to legally stream the content on its platform in exchange for a fee. ​​The process of acquiring third-party content for streaming platforms involves complex negotiations and contracts to secure the rights to the content. The terms of these agreements can vary widely and can include exclusivity, geography, length of the license, and other terms and conditions.

Amazon Original Series are television shows or movies that are produced by Amazon Studios and are available exclusively on the Prime Video streaming service. Some popular Amazon Original Series include “The Marvelous Mrs. Maisel,” “The Man in the High Castle,” and “The Boys.” These shows are produced by Amazon Studios and often feature top talent, including well-known actors, writers, and directors. Amazon just like Netflix has tapped talent all across the globe and started producing movies and shows under the Amazon Studios tag. These shows are then promoted and broadcasted on the platform and revenue is earned from the various monetization options.

Amazon has started streaming sports tournaments on its Prime Video platform too. Prime Video got the exclusive rights to broadcast all international cricket matches played against New Zealand for both Men and Women’s cricket teams for the next four years. Prime Video is slowly acquiring the various rights to multiple sporting tournaments across the globe. This gives Amazon another opportunity to earn through advertising as well as taking a one-time fee for live streaming.

Amazon, as we see, has deployed all the models to earn revenue from streaming live as well as on-demand content. . Over the years, with skillful acquiring, it has gotten the rights to various iconic movies and shows that garner high viewership even today. It has a mixture of timeless classics such as the Harry Potter series and also introduced country-specific content under its own production house.

Do you wish to have your own OTT streaming platform just like Prime Video, but have not been able to decide yet? Get Muvi One, the world’s #1 OTT streaming solution for people who wish to enter the OTT market. With Muvi One, a no-code platform you get,

Click on the link below and get a 14-day trial absolutely free.