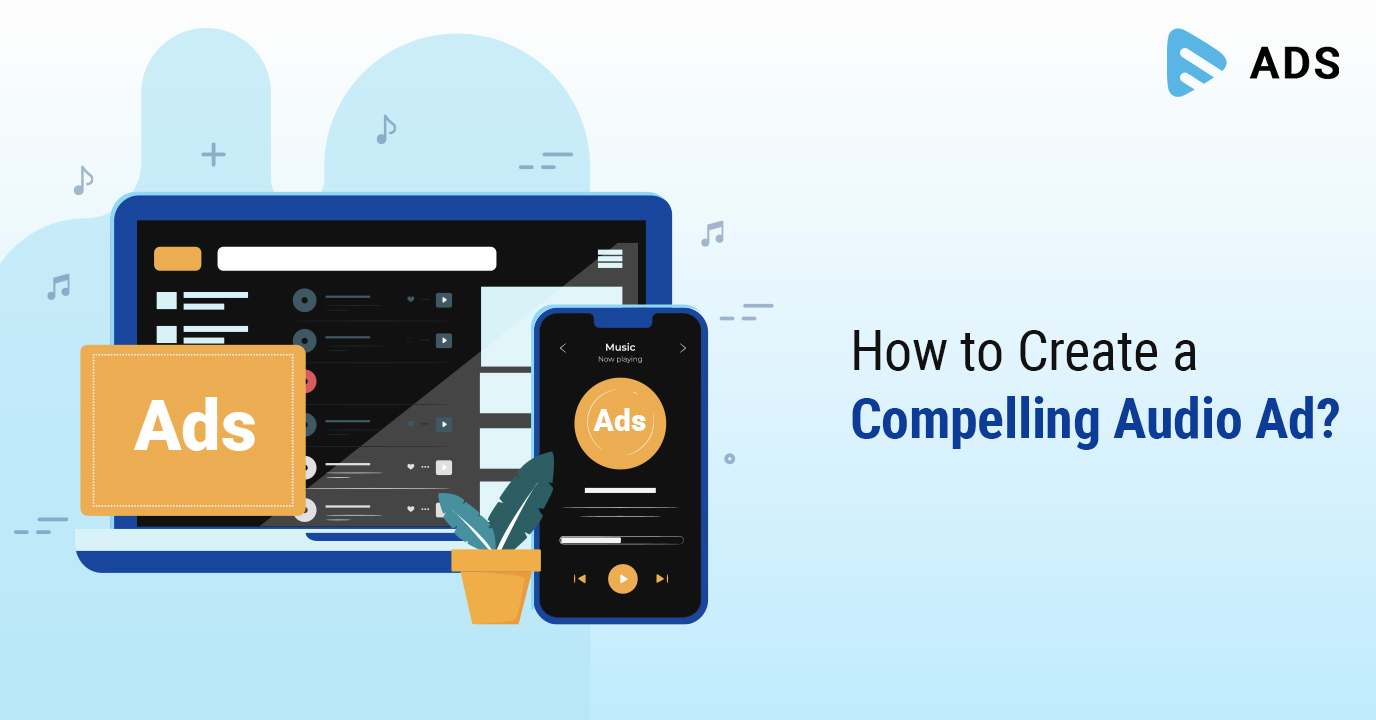 According to Statista, the digital audio advertising space is anticipated to grow by more than 23.5% in 2021. A study commissioned by Pandora found that when audio ads were integrated with participants’ personal music playlists, these ads impacted long-term memory 49% better than radio, 36% better than television, and 29% better than mobile video ads. The effectiveness of audio ads seem unquestionable. But, simple as the question ‘how to create a compelling audio ad’ might seem, the process of creating and delivering an effective audio ad can be quite tricky. Well, this blog will help explain the process to create audio ads for audio/music streaming platforms.

What are Audio Ads?

Be it listening to music in your car or hearing podcasts while travelling, you must have encountered short audio ads that keep playing between audio playlists. An audio ad is a form of advertising which is present in an audio format, predominantly used in an online audio platform such as podcasts, online radio, or music streaming services. Similar to other programmatic advertising channels, audio advertising allows you to layer on other targeting tactics to reach relevant geolocations and target audiences based on your digital advertising strategy.

Why Invest in Audio Ads?

Audio ads are a flourishing ad format these days. The reasons include the pandemic due to which people are spending more time at home, listening to music, podcasts and even radio. Also, particularly due to advancement in technologies in Digital Ad Management Platform and an array of audio and voice-integrated devices , creating audio ads have become simpler. Consumers are spending more of their time in this digital medium at a surprising rate. Studies have found out that audio ads supplied into listener’s curated playlists increased information retention and ad recall. Audio ads can supply you with more qualified leads, as audio streaming platforms allow advertisers to embed their messaging among targeted audiences.

Here are some statistics that will reflect your need to invest in audio ads for your audio streaming platform:

What are the Audio Ad Distribution Channels?

First, let’s talk about ad networks- an online advertising or ad network is a company that connects advertisers to websites/audio streaming platforms that want to host advertisements. These ad networks use a central ad server to deliver advertisements to consumers, which enables targeting, tracking and reporting of impressions. In this way, your ads are played in distribution channels like audio streaming/music streaming websites, apps, radio, OTT platforms, video/audio sharing platforms, etc.

Fun Fact- Did you know that the most effective podcast ads are voiced by the hosts themselves?

How to Create a Compelling Audio Ad?

To create audio ads, you would require some working knowledge of ad aesthetics. We’re here to help you walk you through the most essential requirements for creating an amazing ad commercial.

1. Creating a Great Script– The key to a good audio ad is the script. When you are writing the audio ad script, try to determine what kind of a sell- be it soft, medium or hard sell you want to convey. A soft sell is suggestive without asking directly for their listener’s business. A medium sell usually asks the business to buy the product or service, but never in a forceful way. And a hard sell simply demands the listener’s business, portraying a sense of urgency.

2. Keep the Ad Short– The length of the ad will determine what information you include and leave out of your spot. The average Spotify, Apple Music and Pandora ad is 30 seconds long. Try to create audio ads that are short, simple and easy to understand as people usually have a short attention span. Keeping your information as concise as possible while finding a way to make the message entertaining and attention-grabbing is the key.

3. Keep a Conversational Tone– Every good audio ad campaign resonates with a brand’s target audience. A fundamental way of connecting with your audience is with an audio ad that deploys a conversational tone in your script. Having a conversational voice almost always causes listeners to feel more comfortable with your brand.

4. Include Background Music– You will not have stunning visuals for your audio ads, so the music and sound effects of your commercial should be enticing enough for your customers to grab their attention. The background score needs to work together to convey the mood and setting of your commercial.

For example, if you’re a company that sells wedding tour packages, imagine how your target audience might be captured by sounds of waves crashing in the background or the grating sound of an ice scraper on a car windshield or simply the sound of birds chirping in the forest.

5. Have a Crystal Clear Message– To create an effective audio ad, try to choose one important message, and focus your effort on driving it home. Ask yourself– If your listener remembered just one key message from your ad, what would that be?

Remember that the attention span of your listeners is quite short. Also it’s likely that they’re multi-tasking- they may be driving or washing the dishes while listening to music or podcasts. So, make your ad memorable by cutting back on the information that the listener has to remember. You only have around 30 seconds or less to secure your audience’s attention, so your message has to be crystal clear. Also try to introduce your ad proposition early- always lead with the most important information. This goes right back to the point above on honing in on your key message.

6. Leverage the Ad Banner– Since the audio ads will most likely be played on mobile devices, be sure to include digital banners that are clickable for the convenience of your customers. Starting the ad with the offer and then repeating it allows consumers the time needed to get to the phone and click the ad.

It’s Time to Host your Advertisements with Muvi Ads

An audio ad server like Muvi Ads lets you host and deliver multi-format ads to your websites and apps seamlessly. You can manage your ad inventory in one place and deliver action-inducing ad experience to a wider audience ensuring improved user engagement and consistent ad revenue. Some of the exclusive features of Muvi Ads include:

Why don’t you take a 14-Day Free trial (No Credit Card required) for better clarity?