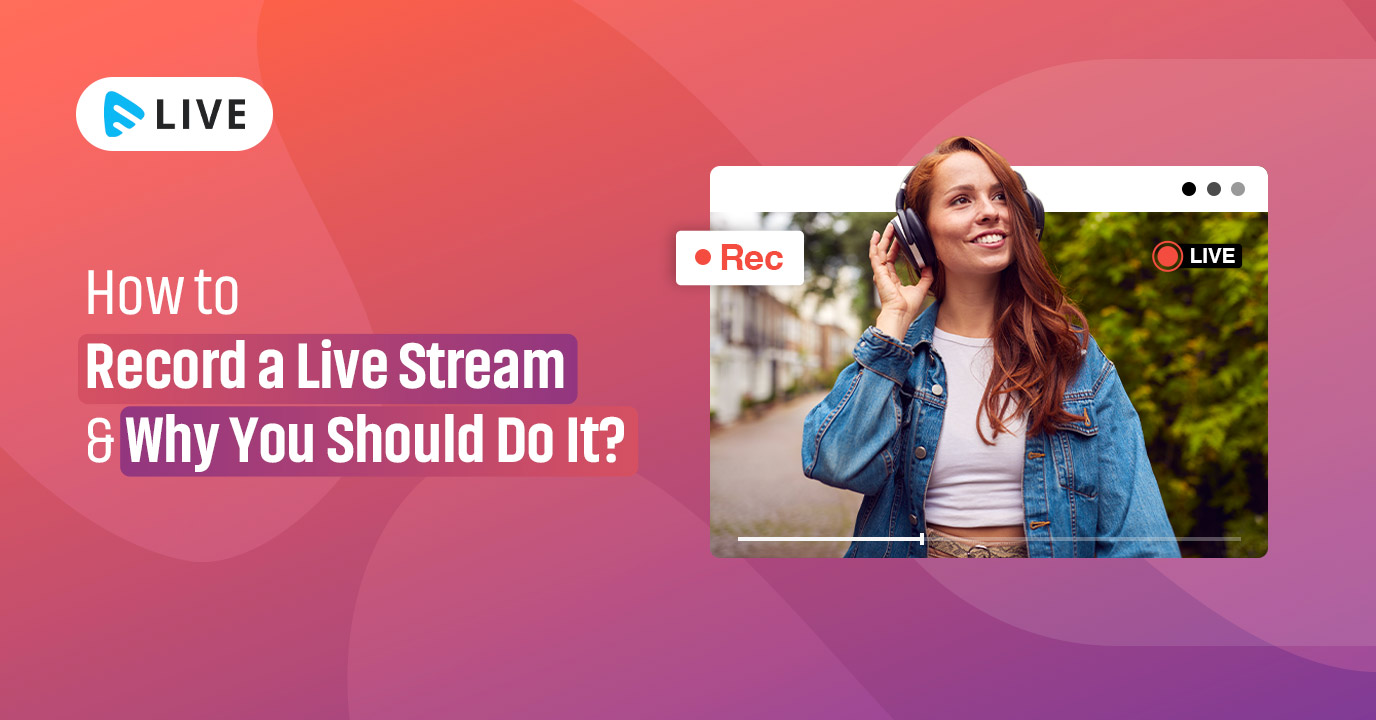 Live streaming is an intensive task. A lot of effort, time and money is invested to create a professional live stream. Hence, keeping a record of your live streams for future use is always a good idea- be it for offering on-demand access to the event after it has taken place, creating short promos or simply for archiving purposes. Broadcasters are also opting for smart ways of monetizing live streams to make it a sustainable activity. In this post, we’re going to cover everything you need to know about how to record a live stream and why you should do it?

Why Should You Record a Live Stream?

Benefits to recording a live stream include-

Viewers gets a Second Chance to Watch

A key reason to capture and publish your live recording online is to give your viewers a chance to replay the stream. Watching the recorded version will give them the chance to catch anything they might have missed the first time around.

It will also create regular visitors who watch and rewatch your live stream recording. This is especially true for live sports broadcasts, making live streams accessible after the game or match has ended is particularly beneficial to fans.

Did you know that Muvi’s DVR streaming feature lets your users pause, rewind, and replay video/audio live streams? With DVR enabled, your users can rewind and replay the live broadcast for upto 30 minutes.

One of the greatest reasons for recording a live stream is the ability to reach larger audiences. With live events, this tactic becomes especially valuable. Due to scheduling live events, only a portion of your total potential audience can tune in to a given live event in real-time as they may not be available at the scheduled time. Given that reality, you can easily amp up your total views by creating a recording and publishing it after the stream has ended.

One of the best reasons to record live streams is to create short promo reels or teasers or commercials after your live event has been published.  Even if the old live footage was not that successful, it can be valuable as background shots.

During video editing, use footage from previous events to create a montage to illustrate the efforts of your company or organization. Including a series of cuts from previous recorded events highlighting various speakers, gatherings, etc can communicate a great deal in a short time.

Recording streams for on-demand playback can help you to maximize your profits. As we noted above, a large portion of views for any given program will likely occur after the live event. Thus, monetizing your exclusive on-demand recorded videos will help you generate extra revenue without much effort.

Take the example of the NBA. The NBA is a pioneer when it comes to generating revenue by live streams. The NBA now generates the majority of its revenue via live broadcasts on TV. However, it also records all live-streamed content and makes that coverage available to subscribers on-demand.

Another important reason for recording streams with a professional online video platform is security- you maintain control and rights to all of your content. So, it’s a win-win situation for all.

Only some enterprise-grade live streaming platforms like Muvi Live offer live stream recording, so make sure to review all the features for the platform before you sign up with them.

For more on security, read our blog Secure Live Streaming: How to Protect your Content with DRM

How to Record Live Streams on the Muvi Live CMS:

Muvi Live is a professional live video hosting platform that has a live recording feature so that you could record and store your exclusive live content for later use with minimal efforts. The live streams will be recorded and stored in the ‘Asset Library’ and you can easily download the recorded live streams in MP4 format. To use this feature, you’ll need a Muvi Live account. Let’s see a step-by-step guide of the Muvi Live CMS to record live streams:

You will have to enable the ‘Record Stream’ feature while adding live stream content in Muvi Live.

In this way you will be able to start the live stream. Once you stop the stream, the recorded version will be automatically saved in the “Asset Library”.

That’s it! Recording live broadcasts with Muvi Live is that simple!

Still having issues while live streaming? Our support team is available 24X7 so that you could easily contact them whenever you need any assistance.