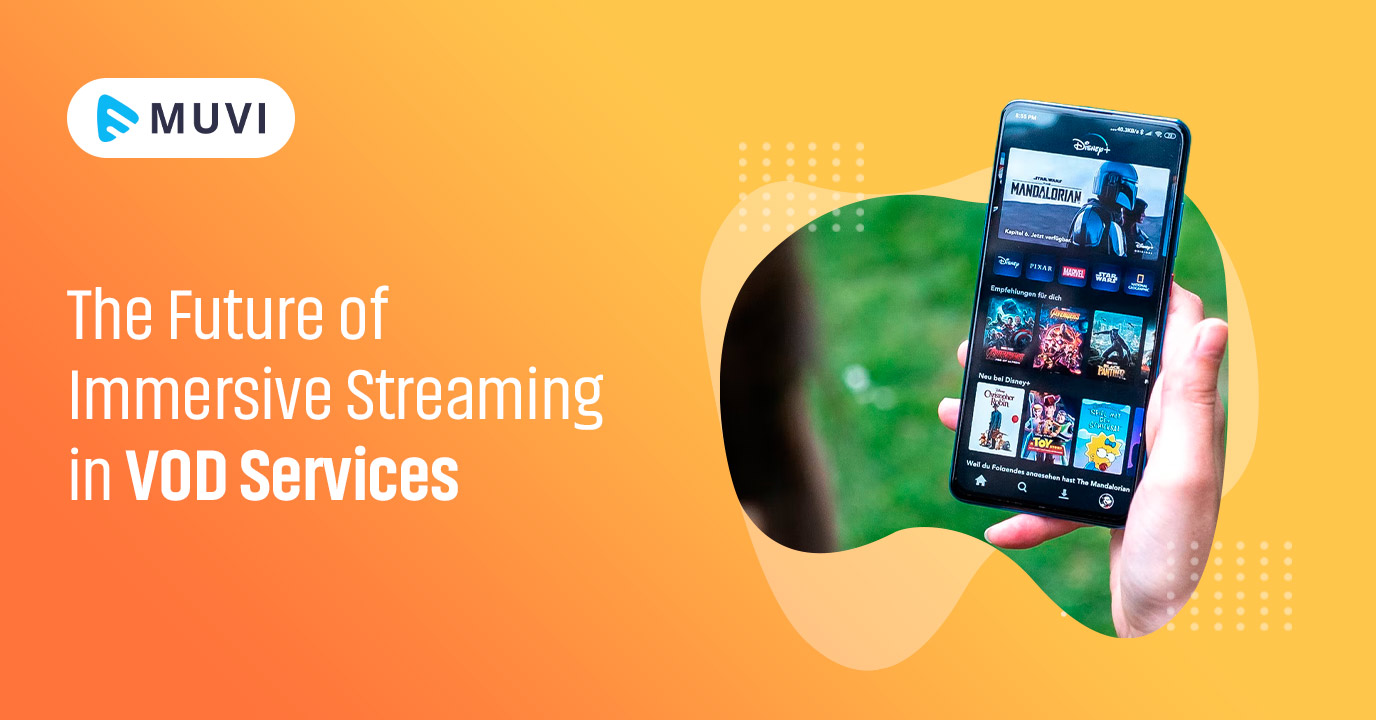 VOD (Video on Demand) is one of the most dynamic and challenging sectors with changing trends around every corner. Immersive streaming is one such new name in the global VOD industry. The growing demand for VR (Virtual Reality) and AR (Augmented Reality) experience coupled with the advancement in VOD streaming technologies has resulted in the rise of immersive streaming in VOD services. While many VOD and  OTT players are experimenting with this latest streaming technology and some are about to adopt it for the long run, many of the new comers in this industry are yet to have a clear knowledge on it.

In this blog we are  presenting an overview of the future of immersive streaming in VOD services and all you need to know about it. So, let’s cut to the chase and start with the basics.

What is Immersive Streaming?

Immersive technology uses 360-degree space to extend or create a new reality so that the viewers can see content in any direction owing to the usage of 360 space/sphere. Immersive technology basically extends reality by superimposing digital pictures on a viewer’s surroundings. An Immersive VOD content is aimed to make viewers feel as if they are inside the video. It is frequently utilized with virtual reality (VR) technology and the users can experience the simulation by wearing goggles-like gear.

Just like regular VOD content, immersive videos can also be uploaded on the streaming sites. The filming approach and the technology used to access it are primarily what make it immersive and so it’s called immersive streaming.

Now that we have some basic ideas about immersive streaming, let’s delve deeper to know its position in the present VOD sector.

The simplest basic and possibly most well-known immersive technology is 360. Most recent smartphones also have the ability to take 360-degree photographs utilizing the “photo sphere” feature, thus citizen creators can create 360-degree images of wherever they are or whatever they want to show! Consequently , the cost of the technology used to create 360-degree footage has decreased significantly. User-generated to brand-sponsored 360 content can be found on social media platforms like YouTube and Facebook. This isn’t surprising, given that the new format gives content creators more room to work with and allows consumers to share their work.

VR (Virtual Reality) is another well-known  immersive technology, particularly since it has become quite the buzzword in recent years. With virtual reality, a person is cut off from the rest of the world while immersed in content. With a head mounted display (HMD), whatever material the user sees in the headset becomes their “reality,” allowing users to immerse themselves in both real and imagined worlds.

Because there are so many terminologies associated with virtual reality, the term “true VR” was coined to refer to the “genuine” Virtual Reality. True virtual reality uses headsets that necessitate extremely powerful computers or consoles. The HTC Vive, Oculus Rift, Oculus Quest 2, Playstation VR, and others are examples. These HMDs are so strong that they use sensors (not included in the HMD) to track a person’s movement and surroundings. The VR material would then change to whatever is in the user’s environment using the sensors.

True VR relies heavily on CGI and 3D modeling for content because of its powerful computers and sensors (more below). The majority of these virtual reality experiences are tethered (with cords connecting the HMD to the computer), but the Oculus Rift isn’t.

HMDs that are connected to smartphones are used in mobile VR. The now-defunct Samsung Gear VR or even Google’s Daydream headgear are examples of this. Some may even consider Google Cardboard to be a form of mobile VR. Cheap mobile VR headsets have already been seen in retail office supply stores and even in apparel stores!

360 VR content is the most basic form of virtual reality. This means that consumers can look in any direction with their device to explore stuff, but the content only surrounds them. It does not take depth into account. In-VR material, on the other hand, is stereoscopic and takes depth into account.

This means that when someone is seeing something “in-VR,” they can move closer to or further away from an object, and the material will shift accordingly. This is why CGI and 3D modeling are commonly used in In-VR experiences.

Despite the fact that the words “360 video” and “immersive video” are sometimes used interchangeably, the two technologies are distinct. Users can navigate throughout the virtual world to gain a 360-degree view using 360 video. Depending on how they move, they can view what is above, below, and all around them.

On the other hand, immersive video alone does not guarantee that viewers will be able to actively participate. While 360 video is beneficial, it is more complex to create than a standard immersive video.

Augmented Reality (AR) is a sort of immersive technology in which digital visuals are superimposed over real-world objects. This implies that AR users aren’t completely cut off from the rest of the world. AR, on the other hand, expands their reality. This is used extensively in the gaming sector. One well-known example is Pokemon Go, in which users can wander around their neighborhood with their phones in hand, looking for Pokemon that are superimposed on the environment. Even companies like Ikea and Target have their own augmented reality apps where customers may choose from a variety of options.

Mixed Reality (MR) is a hybrid of augmented reality and virtual reality. MR, like VR, makes use of a head-mounted display. In contrast to virtual reality, however, a user is not cut off from the rest of the world. Instead, the HMD resembles a pair of glasses that project computer images onto your surroundings (just like AR). As a result, MR is sometimes referred to as AR 2.0. The Microsoft Hololens is an MR headset that is now available on the market. There’s also Magic Leap, which was just released.

The term XR is used to define the entire range of immersive technology – VR, AR, and MR.

Along with such immersive VOD content, spatial audio also comes into the play. Let’s have an overview of what this spatial audio really is.

Spatial audio is an audio experience intended to heighten immersion by simulating a surround-sound setup. Whereas achieving surround sound in your home requires an array of speakers placed methodically around the room, you can use spatial audio to simulate the experience using just your headphones. When you listen to spatial audio, you’ll get the impression that sound is coming from all directions. The way sound professionals capture and generate audio, as well as how the software processes the audio, are the two main components that make this experience work. The majority of movies and TV shows are already blended and optimized for surround sound. Along with recording live audio from the set, sound designers frequently think about the surround sound experience. As a result, when mixing the audio file, they would purposely modify where the sound comes from. If an explosion occurs to the left of the camera, for example, you will hear it louder in your left ear. Such spatial audio enriches the experience of watching immersive VOD even more.

Immersive Streaming in VOD in 2022 and Beyond

Immersive streaming is getting adopted in VOD in diverse sectors, and set to gain even more traction in the near future. Let’s have a look at the different sectors where such VODs are getting adopted –

Experiential marketing is one of the most prevalent uses of immersive technology in business, with companies setting up county fairs, malls, interactive booths at trade exhibits, and even sporting events where customers can try out promotional virtual reality experiences. These promotional experiences can be based on a forthcoming film or television show, or they can be a commercial promotion. For example, to advertise the first season of Stranger Things, Netflix built an immersive experience that immersed viewers in a scenario from the show, allowing them to watch the action unfold firsthand. Movies like The Meg, Mission Impossible, and The First Purge are more modern examples. Travel trade exhibitions are another type of experiential marketing. Travel businesses and tourism boards would throw out cardboard headsets at events and urge visitors to try them out by showing a 360 video of the tourist attraction they were advertising.

Online shopping has taken on new meaning with immersive technology. An increasing number of stores are employing augmented reality apps to allow customers to try out their products before purchasing them. Even with VR, companies in the automotive sector are creating virtual showrooms where customers can look at cars, do virtual test drives, and even sit inside them. The experience is further enhanced by allowing users to sit on genuine car seats, giving them the sensation of being inside a vehicle. The Target and Ikea AR apps, which allow users to visualize how a purchase might look in their homes, are other instances of Immersive ecommerce & Shopping tools.

Many museums are discovering that incorporating immersive technologies into their exhibits allows visitors to interact with the artwork and feel a connection with the artist. Visitors no longer have to stand in line among enormous crowds to stare at a picture from far away because antique pieces of art in the museum have been revitalized into virtual worlds. They can now be immersed in a traditional painter’s workshop or discover themselves in the painting’s landscape. Those who are unable to visit popular museums can now explore rare works of art and limited-edition collections thanks to the ability to download immersive technology apps.

The ad industry hasn’t seen a major technological revolution in a long time, but that has changed with the arrival of immersive advertising. Immersive Advertising is a brand-new ad format that takes advantage of immersive technology while being compatible with today’s ad channels and ecosystems. This new ad technology makes use of the sensory inputs of a mobile phone like its magnetometer, gyroscope, accelerometer. The immersive ad can adjust to device motion using these sensory inputs, making it ideal for mobile advertising. Immersive ads are able to establish and maintain ad interaction since they are highly interactive. They also improve the consumer’s ad experience, which is critical given the advertising industry’s reputation for obtrusive and irrelevant experiences.

Undoubtedly immersive streaming has made its place in the VOD sector owing to its diverse usage across various sectors. Due to the additional advantages such as better audience experience, higher audience engagement rate, and others it is going to be even higher on demand in the coming years. As a result, VOD players are also getting inclined towards such immersive VOD content as that lets them target even wider audiences and earn higher profit.

If you are looking for a compact VOD platform that helps you deliver such diverse content and monetize them along with other industry-grade solutions, get started with Muvi. Building your own branded VOD apps and websites to audience engagement tools and customizable video players – Muvi provides an all-in-one solution for all.

Why Is Transcoding Essential For OTT Platforms?

How to Build an Apple TV App Without Coding?