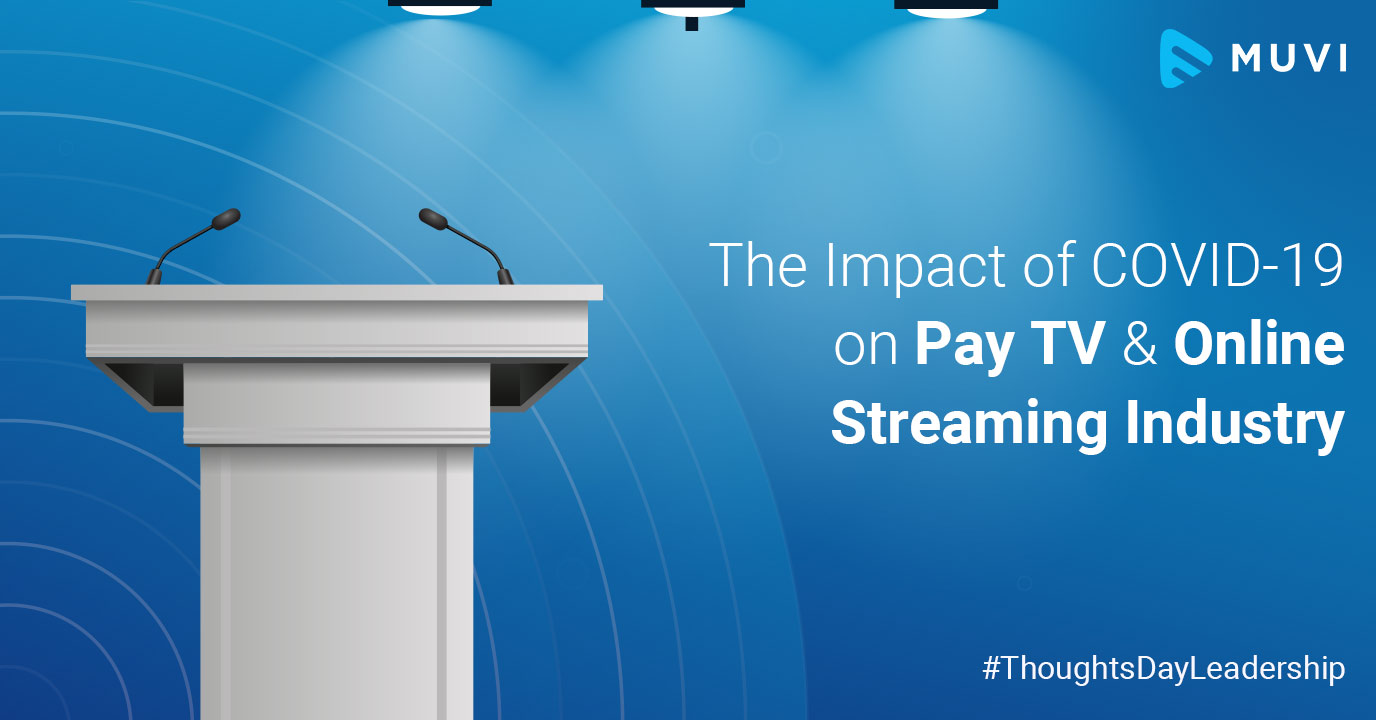 The global pandemic has possibly hit every major industry from IT to logistics. Individuals across the globe have started to adapt to remote working and isolation. With the entire world under lockdown, people are resorting to online streaming for entertainment. In this article, I am going to examine the direct impact of COVID-19 on the pay TV and streaming industry and examine how they are witnessing major shifts from the onset of the pandemic.

Since sports tournaments have been canceled, Pay TV users have started to cut the cord as they have no exceptional reason to keep paying bills in this hour of an economic crisis.

While some may resume watching TV once the tournaments are back on track, most of them won’t. They will rely on relatively lower-priced vMVPD services. Since Pay TV is a recurring expense most families don’t want to bear in this hour of recession, they resort to OTT video subscription services like Netflix, Disney+ where they had already subscribed earlier. Plus, these channels have better content and one can choose when to binge-watch a demanded series.

Although many industries have borne the brunt of the virus, COVID-19 has helped proliferate the business of subscription revenues like OTT video, online gaming, and digital media. The answer is simple-  Consumers under lockdown are scouting for quality content while at home.

Also, the streaming industry is expected to boom because OTT Video services offer not only quality content, but also the highest volumes of it. HBO claims that consumption of its OTT video streaming service HBO Now has soared to 40% from 14 March, with “daily binge viewing of 3+ episodes” up to 65%.

Antenna states that the eight largest SVOD services witnessed an average 64% increase in daily signups, with Disney+ up more than 212% in the first week of the lockdown.

3. SVODs may face the pressure of exhausting content catalog–

Although the short-term lockdown crisis has boomed Netflix’s subscriber sign-up rates to 47%, it would soon exhaust its content library if the shutdown period is further increased. Consumers who have already devoured content on Netflix would soon look for alternatives and burn through the libraries of smaller SVODs as well.

Peacock, an upcoming NBCU OTT video streaming service, already announced that almost none of its originals will be released until 2021.

4. A Surge in Online Gaming-

Online gaming will be the major player in the streaming industry with increasing lockdown periods across the globe. With major sports tournaments getting canceled, people have resorted to online gaming to entertain themselves in isolation. Here’s data to back this up- Gaming traffic on Verizon’s network soared up to a staggering 75%. Publisher of the famous Wild West-themed adventure game  “Red Dead Redemption”, Rockstar Games, promised their players that they would keep their online servers running smoothly after they announced their global workforce to work from home.

I personally feel that the post-pandemic experience will most likely result in a long-term upward shift of digital technology into our daily lives, especially the streaming industry which has already shown signs of remarkable growth.

We are also looking at a world with faster and congestion-free Internet and innovations in video compression technologies as data traffic continues to increase across networks. This will be a big challenge for ISPs, network providers and streaming service providers as they have to cope up with the huge traffic load leading to more innovative technologies.