RTMP vs. RTSP: How to Choose Your Streaming Protocol 14 February 2022 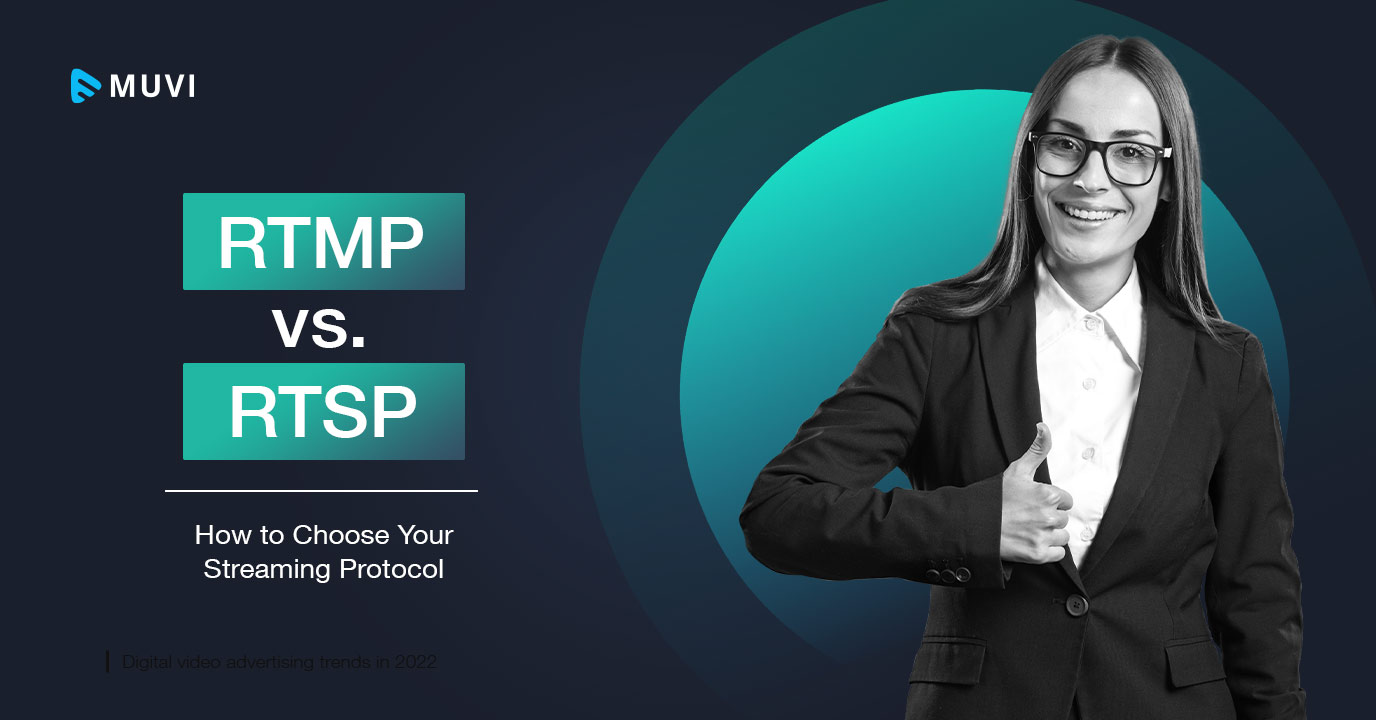 No doubt, there are 100 good reasons for choosing online video streaming, but the most important factor that has persuaded the global audience to access it on their devices is its high-security support system. TCP-based video streaming protocols like RTMP and RTSP have introduced a secure streaming ecosystem.

RTMP stands for Real-Time Messaging Protocol. It is used for streaming audio, video, and live data over the internet. The TCP (Transmission Control Protocol) based protocol maintains a stable connection and allows low-latency communication during streaming data transmission.

Originally RTMP was developed for handling streaming between a server and a flash player.

Based on variations in functionality, RTMP is divided into 5 categories:

How does it work?

This TCP-based protocol is designed to maintain a low-latency connection for video and audio streaming. For smooth data transfer, each stream is divided into packets. RTMP delivers video and audio packets on separate virtual channels simultaneously.

Once a TCP connection is established, RTMP exchanges three packets between client and server. That is how the handshake is performed. The data packets are called chunks.

At the beginning of the process, the client sends a chunk to the server to inform about the current protocol version that is being used. Afterwards, another chunk is sent from the client-side with a timestamp. As a response to the delivery of chunks, the server responds with an echo, including a timestamp of the time it received both the chunks.

After that, the client side sends the final packet to the server, which is a copy of the timestamp chunk, and the server returns it. Once the final data packet exchange is done, the process is completed.

In this phase, the client is all set to start a video/audio stream by sending create Stream ping, and play commands to the server.

RTSP (Real-Time Streaming Protocol), an application-level network communication system, aids in real-time data transmission from server to user device. In short, we can say it acts as a network remote control, establishing and managing time-synchronized streams for continuous media streams. The best example of its operation will be when a user clicks the pause button on the video. RTSP transfers the pause command to the streaming server, and the video is paused.

How does it work?

RTSP is designed to control streams without any local download. It is described as a network remote control for media servers and is conceptually similar to HTTP in function. When a video stream starts, a device using the protocol transfers an RTSP request to the media server, which initiates the setup process.

In the current scenario, video streaming, which includes RTSP, would most likely use different media servers to ingest streams through RTP/RTSP and then use another delivery channel to repackage streaming data and send content to users devices.

RTMP vs RTSP: Which is the right one for you?

Deciding whether to choose the RTMP or RTSP streaming protocol depends on business requirements and your willingness to stream video, audio, and live content over your website and app.

To help you make the decision, here are the details of how each of them work for streaming:

How does RTMP work for streaming?

RTMP is secure and capable of streaming audio, video, and live content across different web browsers and devices compatible with Flash. RTMP streaming is widely accessible without any third-party software support.

How does RTSP work for streaming?

While the real-time messaging protocol uses both TCP and UDP. Because of the use of 2 network communication protocols, RTSP live streams allow users to start watching streams even if they are still being downloaded.

RTSP does not support direct streaming from a web browser. Users have to embed RTSP stream into their website along with adding separate add-ons to make the stream compatible, which is a bit complex as compared to RTMP.

Video transcoding is all about recording video files in one format and re-encoding them into different video formats. With cloud transcoding, you save your time, money, and processing power, which was not possible with transcoding files in traditional ways.

With cloud support, you can encode your data files into all available formats without any extra effort on your part.

With RTMP, you get cloud transcoding support. That means you can watch your videos in different formats on any video player. Real-time streaming protocols are frequently built into IoT software for accessing video feeds. It is the best choice for localized streams and IP cameras.

RTMP and RTSP, both provide unique functionality for streaming audio and video content. At one point of view, RTMP is flexible and compatible with web browsers and mobile devices, enabling users to stream their content without thinking about device or browser compatibility. Whereas, RTSP is best for localized streams or if you use a third-party application for browser and device compatibility while performing streaming operations.

If your demand is for an easy-to-use, robust video hosting platform with broad streaming capabilities, try Muvi. We support RTSP, HLS, and MPD feed for live streaming.

What’s the best part you ask? We are offering an exclusive 14-days  free trial access to Muvi’s CRM to explore its enterprise-grade functionality.

Amita is a content writer with Muvi marketing team. She has over 5+ years of experience in content creation and development. Passionate by heart, she likes to cook, write, sing and do yoga to pass time.