What are The Differences Between Android TV and Apple TV? 19 September 2022 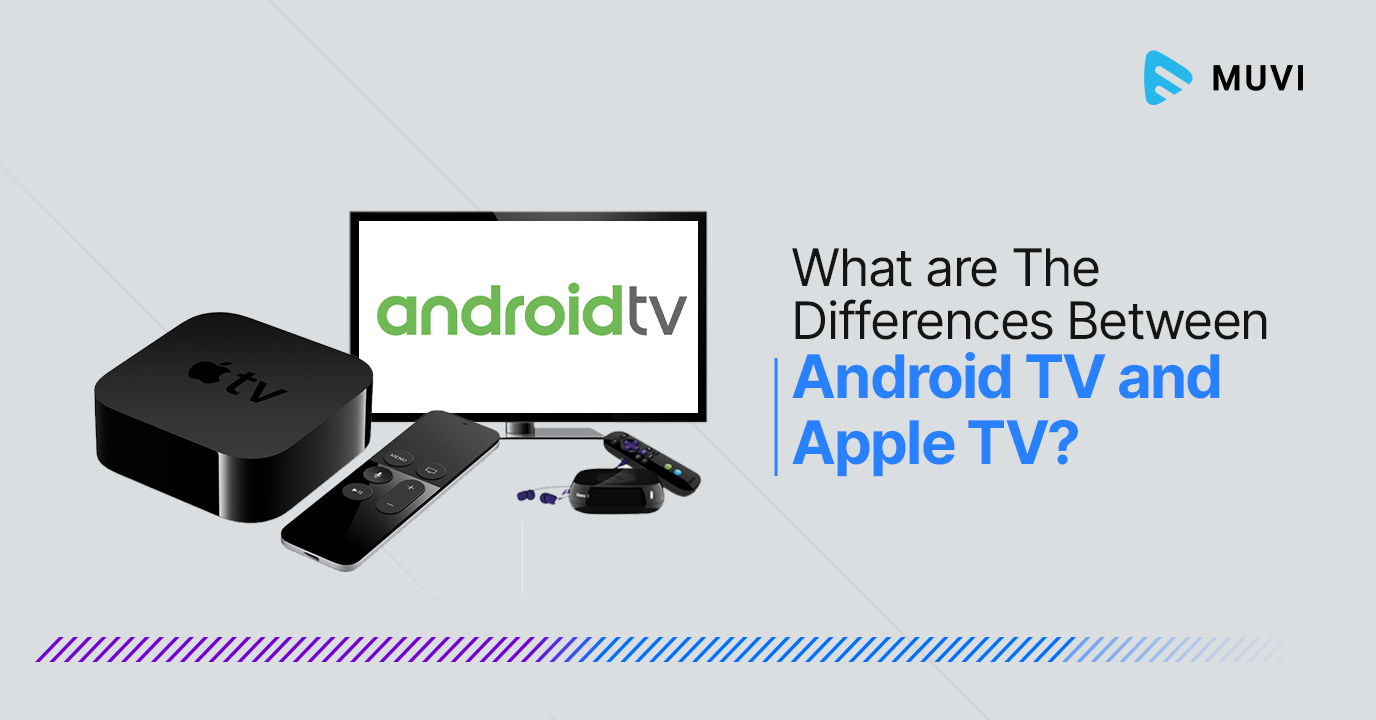 It’s been a while since the modern-day smart TVs have replaced traditional television systems.  Due to several reasons such as access to a wide variety of content, easy set-up, high-quality streaming experience, and better user control, to name a few, smart TVs have become popular.

Furthermore, the growing usage of the internet and smart devices is replacing traditional TV broadcasting with internet-based streaming and Android TV and Apple TV both are two of the most trending names in this area. While Android TV is popular for being a more advanced version of the Android-based smart TV operating system developed by Google, Apple TV is a widely used media streaming device developed by Apple.

But what are their exact functionalities? Or, what are the differences between Android TV and Apple TV? Apple TV vs Android TV is a widely discussed topic around the globe. And we will know more about them in this blog.

Released in June, 2014, Android TV is a Android-based smart TV operating system developed by Google. It is basically a derivation of the Android OS (Operating System) for set-top boxes, television sets, soundbars, and digital media players. Android TV lets you easily stream videos and audio from your apps, cast content of various forms such as music, videos, images, and others from your devices to TV, and many more.

Android TV lets you stream videos/audio from a broad range of apps and platforms like Netflix, HBOmax, Hulu, Spotify, Disney+, and others. Android TV also lets you stream on the live TVs like YouTube TV, Haystack TV, Hotstar, and offers a lot of gaming options.

Another advantage of Android TV is its built-in Chromecast that allows you to cast videos, music, and others from your devices to TV easily. With the rising demand for Android TV around the globe, the Android TV market is forecast to offer lucrative growth scope to the streaming players in the coming years. To give you a glimpse, the global Android TV market is expected to reach US $69.690 billion by 2028, while growing at a CAGR of 2.8% during the year 2021 to 2028.

Not only does Apple TV let you stream videos, audio, music, podcasts etc. to any HDTV or UHDTV, but also allows you to download various apps and games from the tvOS app store. Also, the Apple TV users can easily rent or buy TV shows, movies etc. of their choice from iTunes store and stream their preferred content from a huge pool of options in the tvOS app store that include Netflix, Paramount+, Hulu, HBOmax, Discovery+, Prime Video, and many more.

On one hand, this enables the viewers to stream as per their choices and on the other hand, it lets the streaming business players target the Apple as well as other apps and streaming platforms’ ecosystems to drive higher profit. To give you an estimation, Apple generated US $365 billion revenue in 2021 where 52% of it came from iPhone sales and the rest was significantly contributed by Apple TV.

Apple TV and Android TV both have made their own places amidst the rising popularity of preference-based, flexible, and quality streaming among the audience. But there are a lot of factors that differentiate one from the other. Read on to know more about them.

Apple TV vs Android TV – there are a lot of differentiating factors that make this topic worth the discussion. Let’s have a look at the top differences between Apple TV and Android TV.

While discussing Apple TV vs Android TV, one major differentiating factor to focus on is the apps supported and offered by each of them. Apple TV not only offers its own apps and streaming options including Apple TV+ and iTunes but also supports a lot of other apps, and channels such as Netflix, Hulu, Plex, YouTube, Disney+, BBC Select, Acorn TV, and many more. If you are more inclined to stream Apple’s own content such as over iTunes and Apple TV+, then Apple TV can be a better choice over Android TV. On the flipside, Google Play TV and Movies are not available on Apple TV.

Android TV offers a lot of apps and channels to stream from such as Netflix, Prime Video, YouTube, Hulu, Spotify, HBOmax, Starz, Peacock, Paramount+, and many more. It is often preferred by the audience who wants a variety of content and not only prefers Apple’s own apps or shows.

Android TV also offers a lot of options for the gamers such as Asphalt 8: Airborne, Hovercraft: Getaway, Zombie Age 2, Dead Trigger 2, Into the Dead, Orbia, Badland, BombSquad, Does Not Commute, and many more. Though Apple’s exclusive games are not available on Android TV, you can play all the Google Play games on it.

Apple TV comes with a simple-to-understand and neat UI (User Interface). You can get a complete view of the available apps and content by taking a look at the rows of icons on screen. You can easily choose from them or navigate through the lists. The overall UI of Apple TV looks clean, and polished and the look of its home screen is clean and not too much crowded. Also, Apple TV displays the previews for the upcoming/next content unlike Android TV. However, Apple TV tends to prioritize Apple TV services and apps more over the other ones which is an additional advantage for the Apple-lovers.

Android TV’s UI is also easy-to-understand and lets the users easily browse through its lists of apps and content icons. There are certain apps that are featured by Android TV on its home screen including Plex, Spotify, and YouTube, to name a few and you can easily get daily playlists and recommendations from them. The lists of apps and channels are organized systematically in rows one after the other in Android TV’s UI and the settings are displayed at the bottom. While the overall UI of Android TV is comprehensible and neat, the Apple TV’s UI has a better and elegant look.

Android TV and Apple TV both have good searching capacity and you can easily browse through the shows, apps, or channels and play your preferred content. Android TV is equipped with Google Assistant while Apple TV has Siri for voice assistance. For Android TV, you can simply press the assistant or microphone button on its remote or can simply say “Ok Google” to activate it based on the device you use.

Apple TV vs Android TV – which one is better? The answer is subjective and based on the end-user preferences and priority. From a streaming business player’s perspective, Apple TV and Android TV both can let you target their respective ecosystems with lucrative growth opportunities.

With the streaming industry expanding fast, just launching your own OTT Platform won’t suffice to grow your business or beat the market competition. It is recommended to target both these ecosystems to leverage the best of the market potential.

Wondering how or from where to start? Muvi, an all-in-one OTT platform provider can help you launch your own branded app/website as well as create your own app/channel on both Android TV and Apple TV easily. Furthermore, Muvi supports 13 more environments including Roku, Fire TV, LG TV, and many more. Take a 14-day free trial now to try it firsthand (no credit card required).