What are the Differences Between Apple TV and Fire Stick? 21 October 2022 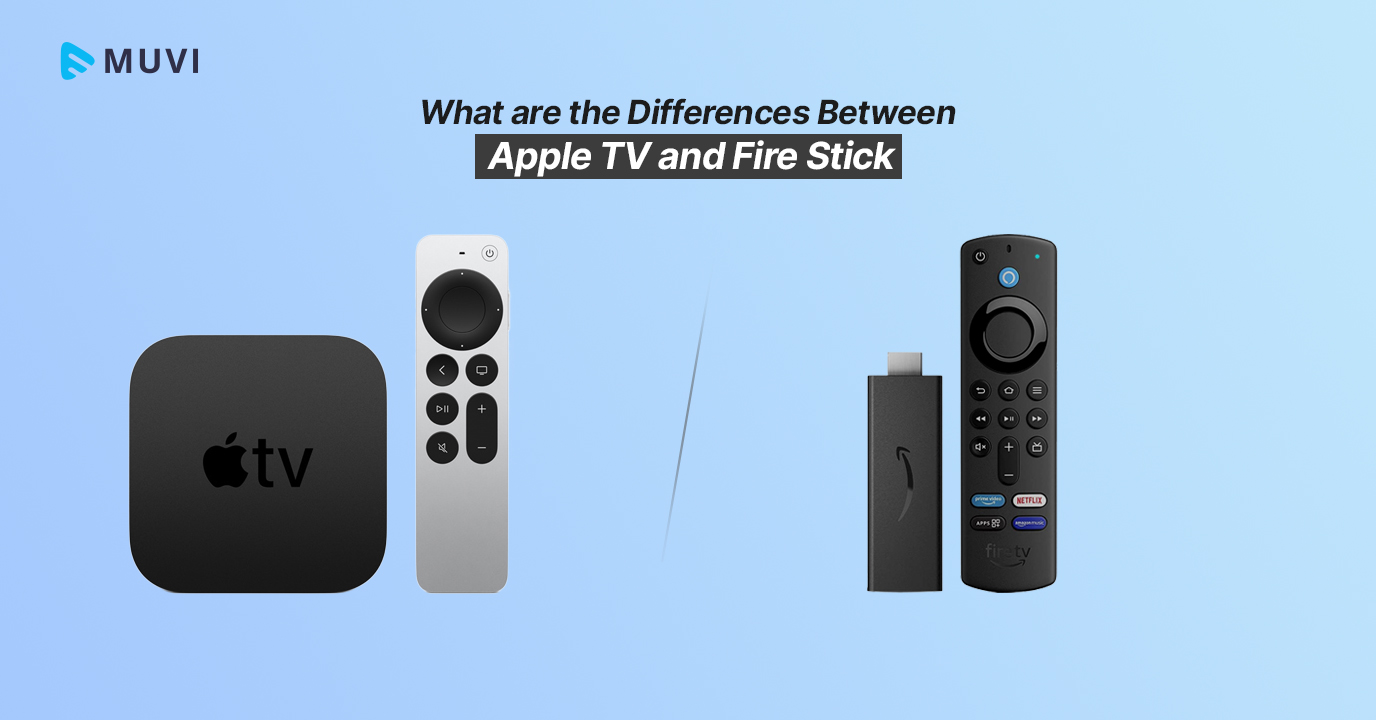 Video streaming has been replacing the traditional broadcasting for a while now and with that diverse digital media players have come into the play to transform the audience’s viewing experience drastically.

Apple TV and Amazon Fire TV Stick both are two well-known names in the present streaming devices market and despite having the same core functionality, they differ from each other on several aspects – starting from the apps and channels offered to supported video/audio formats.

If you have a streaming business or are planning to start one, then you must have a clear understanding about their differences, respective ecosystems, and growth scope to leverage them for your business growth. And in this blog, we will walk you through the key differences between Apple TV and Fire Stick. So, let’s get started!

Apple TV refers to a digital media player and microconsole developed by Apple Inc. for watching movies, shows, and other video content delivered by Apple. The first generation Apple TV, originally announced as ‘iTV’ was launched in September 2006 and since then several updates of Apple TV have been released such as second generation in September 2010, third generation Apple TV in March 2012, and Apple TV HD released in March 2019, to name a few.

Also, 4K first generation, 4K second generation, and 4K third generation Apple TV generations were released in 2017, 2021, and 2022 respectively. Not only does it offer a range of apps and games to its users but also lets you stream videos, podcasts, music etc. as well as helps you with casting and mirroring.

Amazon Fire TV Stick is a popular media streaming device that lets you transform your conventional TV into a smart TV. You can easily plug a Fire TV stick into the HDMI (High-Definition Multimedia Interface) port of your TV to stream movies, TV shows and other content from Amazon Prime, Netflix, YouTube, Hulu etc. The first generation Fire Stick was released in November, 2014.

With over 25 million paid subscribers as in the first quarter of 2022, Apple TV ecosystem lets you target the audience of 15,000+ diverse apps and channels including Apple TV+, iTunes, Hulu, Netflix, Plex, YouTube, Disney+, BBC Select, Acorn TV, and many more.

Though the apps and shows offered on Apple TV are more inclined to Apple’s own content, it offers diverse apps, shows, movies, and content to cater to different audience requirements and preferences. Also, it lets you easily target over 20 million Apple TV+ subscribers to avail higher growth scope.

Fire Stick, on the other hand, supports 14000+ apps and channels including Peacock TV, YouTube, Plex, Spotify, Amazon Prime, and others. While the content offered on Fire TV is more inclined to the ones offered by Amazon, it often works as an advantage to target the respective ecosystem.

Also, it lets the users easily access Amazon Kindle, music and more. As stated in a recent market report, smart TV sticks are used in nearly 38 million homes in the U.S. itself and Fire TV sticks have a significant contribution to it. If you want to target different audiences for the respective apps and channels, then Fire Stick can offer the required growth scope for you.

HDR10+ is a high dynamic range video technology to add dynamic metadata to HDR10 source files. The dynamic metadata is crucial to ensure optimization of every HDR video frame to offer high quality viewing experience to the audience. Here’s a glimpse of the overall specifications and pricing of Apple TV and Fire Stick.

Apple TV and Fire Stick, both of them give tough competition to one another in terms of voice control, however in terms of seamless connectivity with diverse devices, Alexa turns out to be more suitable.

Apple TV and Fire Stick both offer easy set up. All you need is an HDMI-compatible TV and internet connection to plug and play. While Apple TV comes with power cord, Siri remote, and HDMI port USB cable, Fire Stick comes with Alexa voice remote, USB and HDMI extender cable, and power adapter for easy set up. Many people consider the Fire Stick more convenient to set up for its small size, however, the Apple TV is also quite portable and offers easy setup.

Apple TV and Fire Stick both are popular among the audience and with the rising usage of internet and smart devices the growth scope in both the ecosystems is expected to expand even further.

You can either target any of the ecosystems by creating your own Apple TV or Fire TV app/channel or can target them both as well. Muvi, an all-in-one OTT platform provider, offers a no-coding solution to launch your own Apple TV and Fire TV channel/app through a few button clicks. Also, it offers a range of competitive advantages such as –

Take a 14-day free trial to get started today (no credit card required).