What are the Differences Between Roku and Fire TV? 28 October 2022 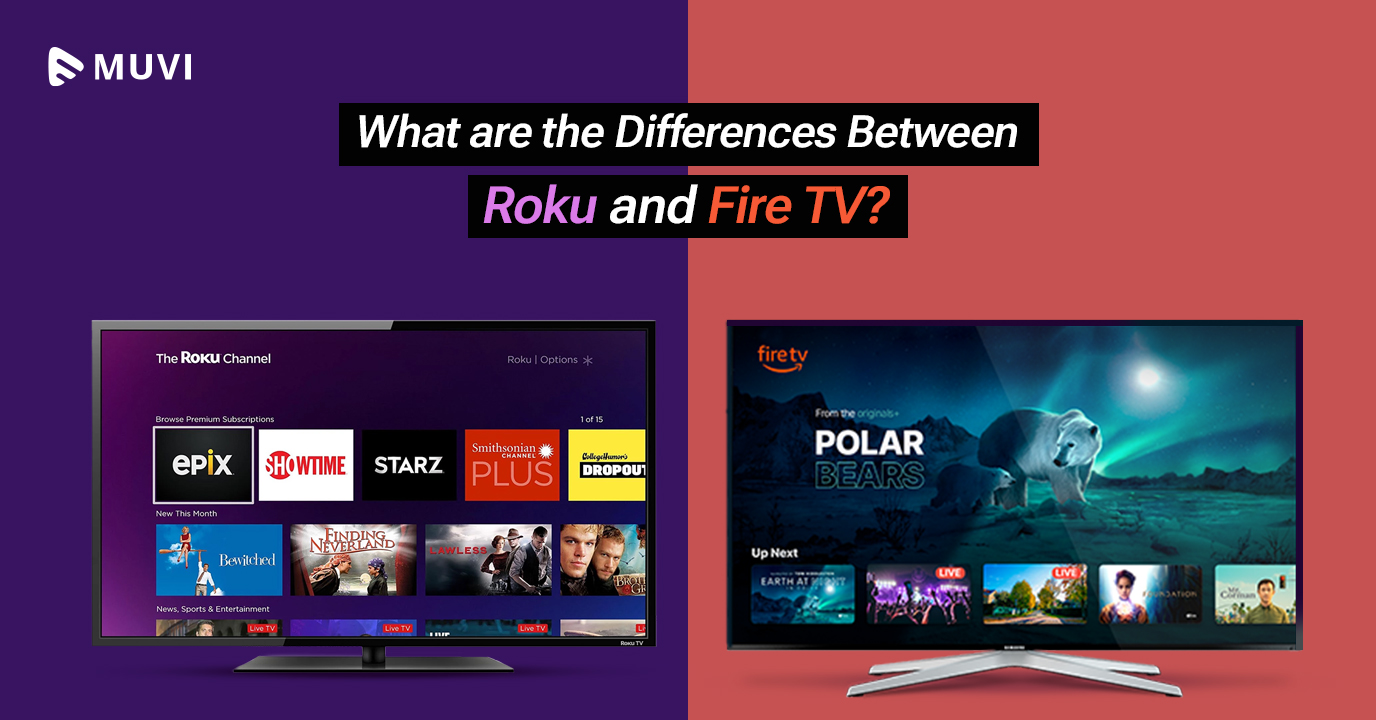 With internet-based streaming taking the limelight, the demand for digital media streaming devices has surged fast over the past years making Roku and Fire TV two of the most popular names in this sector.

Easy access to a broad range of movies, shows, games, series, sports, music, and others, better user interface, affordability – these are some of the common driving factors to their high demand among the audience that streaming business players are leveraging to expand their audience base, scale up their business and increase their profit.

If you too are running an OTT streaming business or planning for the same, then you must have a clear idea on both Roku and Fire TV, the differences between them, their respective ecosystems, growth scope, and more. And in this blog, we are going to walk you through all you need to know about Roku vs Fire TV.

Roku refers to hardware digital media players that are manufactured by Roku, Inc., an American media streaming devices company. Founded by Anthony Wood in 2002, the first Roku model was developed in May 2008 in collaboration with Netflix and since that time several generations of Roku were released as shown below.

What Is Fire TV?

Fire TV or Amazon Fire TV refers to a range of digital media players and microconsoles developed by Amazon. The first generation Fire TV was launched in April 2014 followed by several other releases as listed below.

Roku offers a range of apps and channels including popular TV, free TV, live TV and music. Some of its top apps/channels include Netflix, Disney+, HBOmax, Roku Channel, YouTube TV, Hulu, Amazon Prime Video, Peacock, Spectrum, Vix, Pluto TV, NewsLive, Sling, Now, Vevo, Amazon Music, and Spotify, to name a few. It also supports Apple TV+ content. As a result, the streaming players can target a broad range of ecosystems for these respective apps/channels as well as for Apple TV+.

Amazon Fire TV also offers a range of apps, and channels such as Peacock TV, YouTube, Tubi, Pluto TV, Paramount+, YouTube TV, to name a few. Also, it offers a wide range of games like Asphalt 8: Airborne, Beach Buggy Blitz, Vendetta Online, and many more. This also lets the streaming market players target the respective app/channel audiences and leverage the ecosystems. However, Amazon’s apps/channels are more emphasized in Fire TV for the obvious reason.

Roku comes with a catchy and simple-to-understand UI (User Interface) where the available apps and channels are displayed on the homepage and the menu is displayed on the left hand side. One can easily navigate through the apps and channels on its home page or pick up from the list under menu such as movie store, TV store, streaming channels, settings, and others. Also, it offers a personalized feed and lets one find specific content based on genre, actor, director etc. as well as lets you add your preferred channels and access your favorite ones easily.

Fire TV, on the other hand, offers a simple and easy-to-navigate user interface. Its home page displays a streamlined and neat menu including live, your videos, movies, TV shows, settings, apps, and other options. While the home screen of Fire TV is not that neat and organized like Roku, it also personalizes your home page by featuring the most frequently watched Fire TV channels. Also, it recommends movies, shows, and series based on the viewers’ watch history.

Roku and Fire TV both come with voice control features. Not only does Fire TV function smoothly with Alexa but it lets you control other smart home devices with its voice controlled remote.

When it comes to video quality, Fire TV and Roku give tough competition to each other. Based on the specific devices, there can be variations in the video and audio quality and specifications as displayed below.

Roku and Fire TV both have lucrative global market shares and with the streaming industry expanding faster, the future holds even more growth scope for the streaming business players. Roku has over 36% share of the video streaming market in the U.S. itself, while the Roku TV OS has 6.4% share of the global smart TV streaming market. As stated in a recent market report, there are over 63 million active Roku user accounts around the globe as of 2022, while the yearly Roku revenue is over US $2.5 billion and is forecast to grow further. Also, Roku accounts for more than 15% of the US smart TV sales.

Fire TV, on the other hand, has over 50 million monthly active users with over 150 million Fire TV devices sold around the globe. Holding more than 28% share of the U.S. streaming box market, nearly 23% of the viewers use Fire TV in the U.S. itself. Also, a recent survey by Amazon revealed that the average watchtime for Fire TV devices was 4 hours in 2021, up from 3 hours in 2020. This depicts the lucrative growth the Fire TV market and ecosystem offers.

Fire TV and Roku both offer growth opportunities to the streaming businesses by creating their own branded channels. Despite having their own sets of pros and cons, it is always a good idea to launch your own branded app/channel to target their respective ecosystems and leverage the growing market potential.

Muvi, an one of its kind OTT platform provider, offers a complete solution to launch your own branded Roku as well as Fire TV app to unleash the potential of their growing ecosystems. Also, Muvi offers several competitive solutions/advantages such as in-app purchase and subscription, multi-language support, deep linking, audience engagement tools, analytics and insights and many more.

Intrigued to try it out? Take a 14-day free trial today (no credit card required).