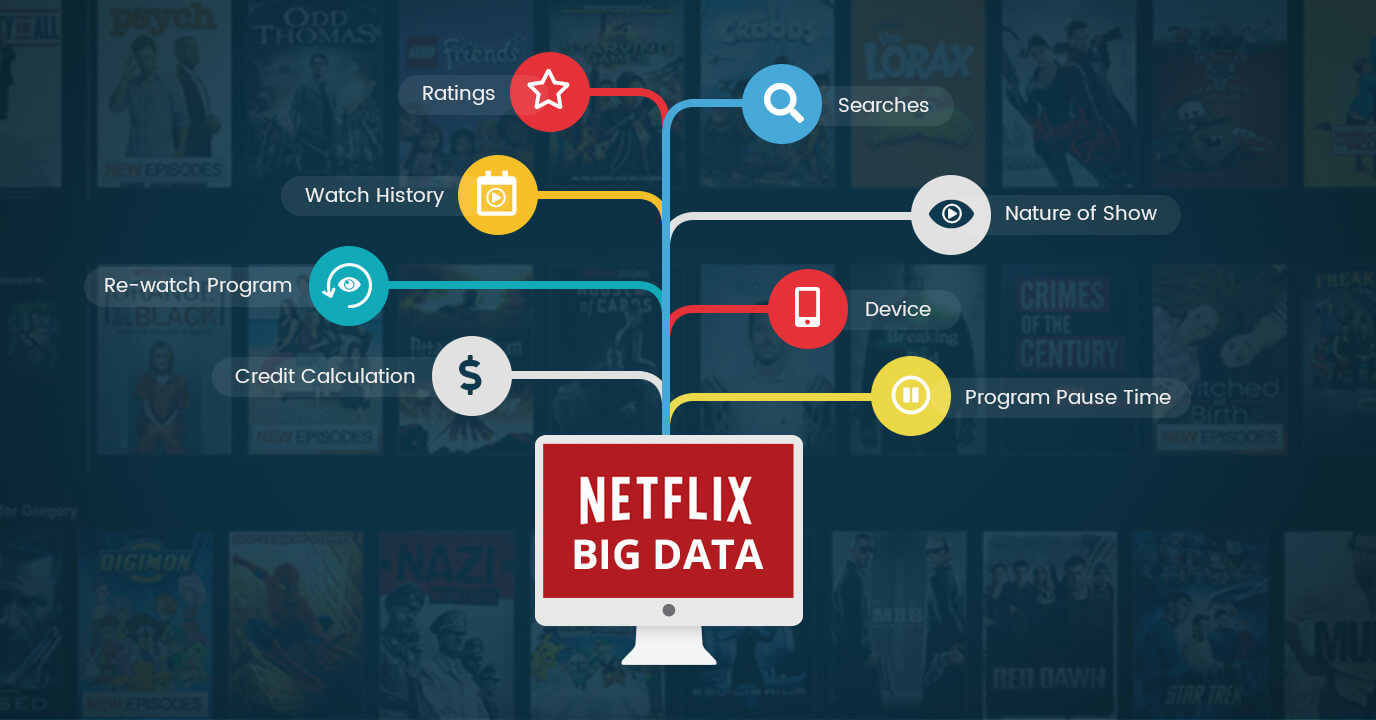 With over 115 million subscribers, there is little doubt that Netflix is the uncrowned king of the online streaming world. Netflix’s phenomenal rise to streaming dominance has taken industry leaders aback, forcing them to question- how could one single platform take on entire Hollywood? The answer is simple- Big Data.

According to the Wall Street Journal, Netflix uses Big Data analytics to optimize the quality and stability of its video streams, and also to assess customer entertainment preferences along with viewing pattern. This allows Netflix to target its users with offers for a show they might like watching. These collective efforts have been very pivotal in helping the streaming giant make a successful transition from renting DVDs to delivering digital video over the last decade.

Data is the secret weapon

Netflix has a huge subscriber base of 115 million and counting. And this comes up with a humongous amount of data that can be analyzed to improve the user experience. From predicting the type of content likely to garner more viewership to recommending content to users, Netflix collects data from every source.

Since its days of being a DVD distributor, Netflix had given prominent importance on collecting user data and creating a recommendation system. In 2007, after the launch of its streaming service, Netflix took 6 years to collect proper data for estimating the sure success of its first original production “House of Cards”. Netflix has been setting the biggest example of the use of analytics in the right direction for spelling business success in a domain as unpredictable as content production.

Such has been the success of usage of big data analytics, Netflix even gave away $1 million to a developer group for an algorithm that even increased the accuracy of the company’s recommendation engine by 10 percent. The algorithm helped Netflix to save $1 billion a year from customer retention.

Netflix knows what you want to watch next

Netflix knows more about your viewing habits than you think. Now, this might sound scary, but it’s pure statistics. The prediction systems powered by algorithms know what we prefer to watch before we do.

Analyzing data and gaining insights have been the pillar behind the success of Netflix in recent years. They are able to gather insights, adjust algorithms, and optimize the streaming experience.

Viewing habits are crucial for predicting user behavior, including time spent on selecting movies, time spent on playback, number of times a show was watched and much more. Conventional calculus gave Netflix the required foundation to start studying their users and provide them with appropriate and personalized content.

Netflix’s tagging feature allows consumers to suggest and recommend various series and movies they believe individuals will enjoy based on their past viewing history. These suggestions enable users to click and engage with other content. Analyzing viewers’ habits, Netflix took 6 years to engineer their ‘Magic Formula’ perfectly fit to steer a show that had all the elements to become a sensation. Thus, demonstrating perfectly how to combine data with creativity. They were able Not only this, Netflix used targeted advertising and recommendations to reduce its promotional campaign budgets by targeting only the most valuable and relevant people at a single time. Next time, you watch a show on Netflix, take a moment to think about the type of data you are sharing by just searching, clicking, and watching. And surprisingly, it’s more than you think!

Netflix is one prime example of how technological advancement can work together with human creativity. Netflix debunks the misinterpreted theories about content preference by flashing the concealed potential of user data to read a user’s mind with incredible accuracy.

As companies adopt big data, we can expect to see more and more content producers and providers investing in predictive content programming. Rather than merely assuming customer viewing habits, businesses should decide on big data. Whether for a big enterprise like Walmart or an SME, optimum utilization of data can transform anyone’s business irrespective of their size. And Netflix is just a torchbearer to them.