HLS vs WebRTC vs MSS vs MPEG-Dash: Which Live Streaming Protocol Is Best For Your Live Stream? 23 December 2022 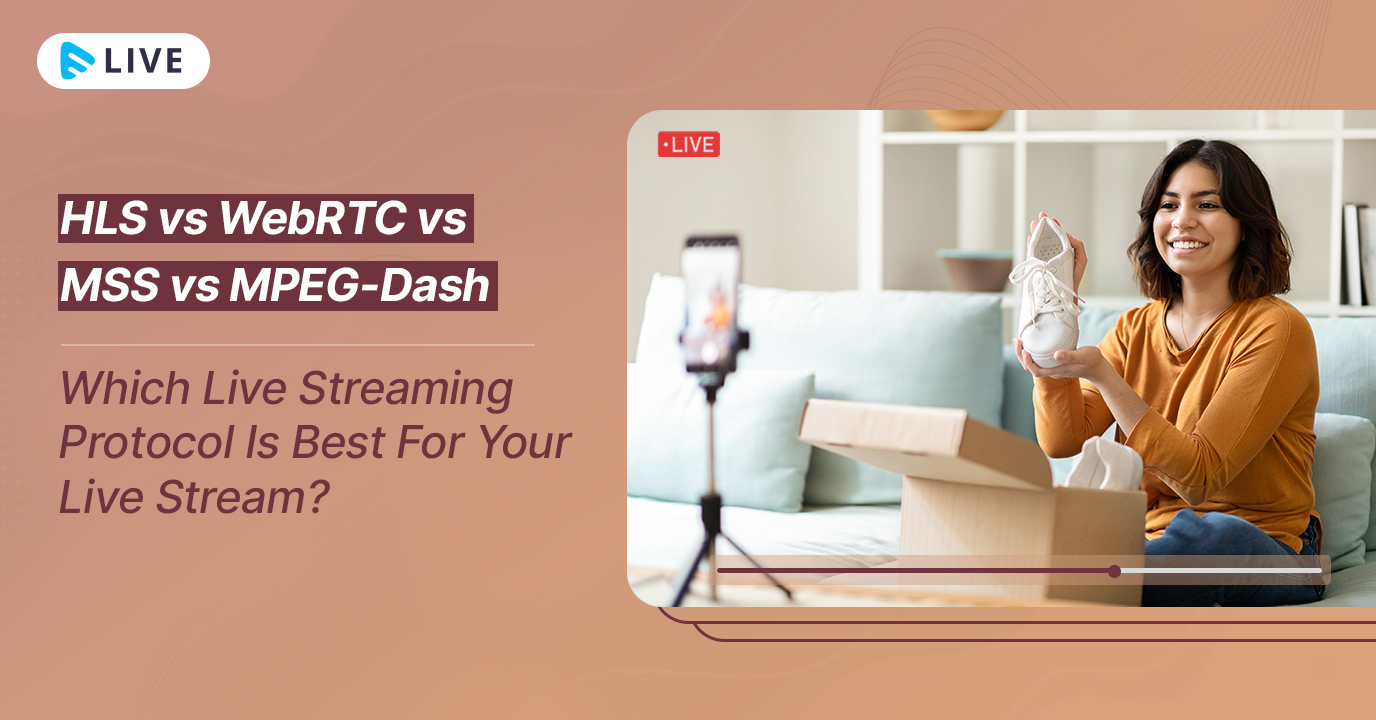 What is HLS Live Streaming Protocol?

HTTP Live Streaming (HLS) is one of the most widely used live streaming protocols. It is particularly popular because it is compatible with most devices, and offers an adaptable streaming experience to viewers. Let’s understand the working and advantages of HLS live streaming in a bit more detail.

The HLS live streaming protocol uses the HTTP protocol to transfer the feed to the user’s devices. The original feed is first broken down into multiple smaller downloadable HTTP files, which are then delivered to the end users. It uses the below-given workflow:

HLS live stream has multiple advantages, some of which are:

Since, HLS is basically an HTTP-based streaming protocol, hence it does not have any device prerequisites and hence is supported by more devices and browsers.

HLS streaming protocol often uses AES 128 Encryption technique to protect the live stream from piracy. AES is a symmetric key algorithm, which uses a secret key for both encrypting and decrypting the data. Hence, the feed remains protected from unauthorized access, as unauthorized users cannot intercept the secret key.

What is WebRTC Live Streaming Protocol?

Web Real-Time Communications (WebRTC) is an open-source protocol that enables video live streaming among web browsers and devices. Due to the elimination of need for specialized applications and a tendency to offer interactive live streaming with the least latency, WebRTC has become quite popular nowadays. Moreover, the application of WebRTC technology is not limited to video streaming only. In fact, it is being used immensely for real-time voice and text delivery over the internet too!

WebRTC uses peer-to-peer technology over the internet for live streaming. Let’s take you through this process in a bit more detail.

The WebRTC protocol allows one browser to capture the live feed, encode it, and then live stream it directly to another browser over the internet. Hence, it basically forms a bridge between the two browsers, and that is the reason why it is called peer-to-peer communication.

WebRTC is a browser-based open-source protocol. Hence, it is completely device-independent. It can work perfectly on any device that can access the internet.

One of the biggest plus points of WebRTC is its security. It is because Secure Real-Time Protocol (SRTP) is a mandatory condition for all the WebRTC live sessions.

Also, multi-layer security ensures that an unauthorized user never gets access to the feed. It is because even if the user succeeds in bypassing the VPN, firewall, and NAT, they will still get stuck in the WebRTC protocol layer encryption. So, if you are concerned about the security of your live streams, you can definitely trust WebRTC!

What is MSS Live Streaming Protocol?

Microsoft Smooth Streaming, known in short as MSS, is a streaming protocol developed by Microsoft in 2008. When we talk of the protocol itself, then we must declare beforehand that this protocol is no longer in use as of 2022. But, we thought of discussing it as it forms the basis of adaptive bitrate streaming, and is the starting point for many advanced streaming protocols.

The operation of the MSS protocol was somewhat similar to the operation of the HLS protocol. It also divides the live feed into small MP4 fragments, which are of duration 2-4 seconds each. During the transmission, the fragments were transmitted in order of display to the end users. This is the reason why this protocol supported adaptive bitrate streaming with ease!

As it supported PlayReady DRM, we can say that MSS was quite a secure live streaming protocol, especially for Microsoft devices.

What is MPEG-Dash Live Streaming Protocol?

MPEG-Dash is Dynamic Adaptive Streaming over HTTP. It is one of the popular video streaming protocols that supports a wide range of devices. In this section, we will take you through its operations, advantages, disadvantages, and more! So, keep reading!

MPEG-Dash is currently being supported by the following players and ecosystems:

To secure a MPEG-Dash live stream, you will need to use multiple DRM systems which can either be built-in or integrated into your live streaming infrastructure. And, if you are using Muvi One or Muvi Live, you don’t need to worry, as we offer built-in multi-DRM protection.

HLS vs WebRTC vs MSS vs MPEG-Dash – A Comparative Study

Based on parameters, we have tried to compare the four streaming protocols in the table below, and see where they stand in terms of individual functionalities.

From the above comparison, we can say that HLS is one of the most complete Live streaming protocols among the four. Barring latency, it performs well in all the other parameters. Similarly, WebRTC does exceedingly well in all parameters except adaptive bitrate streaming.

Which Live Streaming Protocol Will Suit Your Business And Why?

Now comes the million-dollar question: which live-streaming protocol should you use?

Well, honestly speaking, it solely depends on your business requirements! What suits other businesses might not suit you, because every business has specific requirements and performance criteria to fulfill. So, to make the selection process a bit easier for you, we will now discuss some industry-based use cases and understand which protocol suits which industry and why. So, let’s begin!

If you belong to the education or eLearning industry, then 99% probability is that you will need the live streaming protocol for conducting live classes. And, we all know that interactive live streaming and secured streaming are the two most important features that you should be looking for.

In that case, we would recommend you should go with either WebRTC or HLS Live Streaming protocols, as they are secured and capable of providing a platform where the instructors can freely interact with their students.

Religious institutions like churches often live stream religious events like a Christmas carol. In such cases, the main objectives to keep in mind are scalability and latency, as you want to reach out to as many followers as possible within the least time.

That is why our study says that HLS live streaming would be best for religious institutions. Adaptive Bitrate Streaming will help you reach out to people living in remote areas too! And as far as the latency is concerned, then HLS latency is a bit lesser when you compare it with MPEG-Dash, which is the other similar alternative available.

A sports live streamer might have to consider multiple factors while choosing the live streaming protocol. Some of them are Latency, Security, and ABR.

Even if you compare WebRTC and HLS, then HLS live streaming protocol will be best suited for your business as HLS is quite scalable, and scalability is a vital criterion for established sports live streamers. So, our suggestion would be you should go for HLS live-streaming protocol!

Whatever your business requirements, Muvi Live will fulfill all your live-streaming goals! With built-in multi-DRM security, DVR-enabled live streaming, and built-in CDN infrastructure, you can deliver HLS live feeds as smoothly as ever!

So, don’t waste your time! Sign up to start your 14-day free trial today!