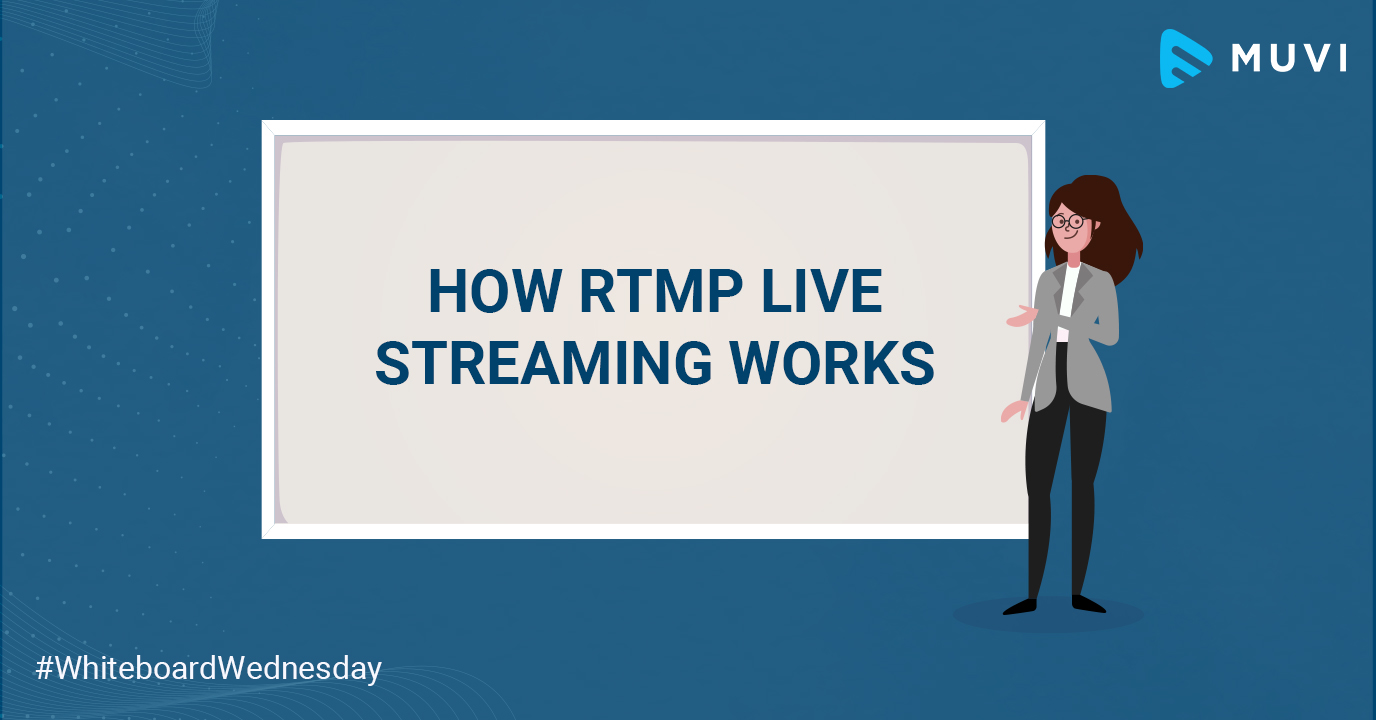 It’s time for another interesting Whiteboard Wednesday session to make your streaming journey easier. In today’s blog, we will be taking a closer look at what RTMP is and how RTMP live streaming works. As online video streaming becomes more popular in its adoption across various industries, modern technology has started to emerge to support its widespread adoption. One particular streaming technology that had helped shape the evolution of live streaming standards is RTMP or Real Time Messaging Protocol. In this post, we are going to break down everything you need to know about RTMP and how it relates to live streaming.

The RTMP or Real Time Messaging Protocol is a Transmission Control Protocol-based technology originally developed by the predecessor of Adobe to work with the Adobe Flash player. It is a streaming protocol initially designed for the transmission of audio, video, and other data between a dedicated streaming server and the Adobe Flash Player. While once proprietary, RTMP is now an open specification.

Originally, RTMP was used to transmit content between a video player and a hosting server, which was referred to as “RTMP delivery.”  Although the Flash Player technology is getting near its deprecating day, RTMP remains one of the top choices of streaming platforms. For example, it is still being used as an ingest protocol by Facebook Live, YouTube, and Twitch.

What is RTMP Ingest?

Nowadays the purpose of RTMP live streaming has changed as in RTMP’s primary role now is to deliver content from an on premise or cloud encoder to an online video hosting platform. This procedure is referred to as “RTMP ingest.” RTMP ingest is the process of using the RTMP technology for encoding and delivering the live video from the encoder to the online video platform.

There are three distinct parts that make RTMP ingest work:

1. The Handshake– The process of RTMP live streaming begins with a handshake between the client wishing to stream media and the online video platform/live streaming server delivering that video or audio content. It involves the following steps:

3. The Stream– The player on the client’s device begins streaming the video from the server using the communication protocol.

This sequence of RTMP live streaming happens very fast- in a matter of a few seconds. The workflow is technical but live streamers don’t need to worry about this if they have opted for a secure and stable live streaming server .

Although the Flash Player has been depreciated, no one can deny the many benefits that RTMP offers for live streaming:

How does RTMP Live Streaming Work

The First Mile– When a live video feed is picked up by a camera and sent to an online video platform or media server via an encoder is called the first mile.

The Last Mile– When the processed feed is scaled and sent through a Content Delivery Network (CDN) for distribution over internet protocol to the viewer’s device, this part is called the last mile where the stream is delivered to the Flash Player on the user’s end.

However, the use of Flash player has depreciated and therefore RTMP is no longer being used in the last mile. At this point RTMP is taken up by other protocols for playback on mobile devices, laptops etc. For the first mile, though, RTMP is still widely used.

Because today’s HTML5 players require HTTP-based protocols, an online video platform  ingests an RTMP stream while transcoding it into a more playback-friendly alternative like HLS. Whether the RTMP stream is coming from an IP camera, a cloud encoder, or from a mobile phone, makes the conversion and delivery process seamless.

For more information about streaming protocols, read our blog Comparing SRT, HLS, and MPEG-DASH: Which Streaming Protocol to Choose?

Initially, RTMP was the de facto standard for live streaming. However due to security issues and the emergence of latest technology, introducing the need to send live streams to mobile devices, tabs and not just browsers, the Flash Player lost its once established popularity ultimately leading to its depreciation.

Thus new protocols emerged and streaming media servers adapted to handle the changing streaming standards. However, one common misconception is that RTMP is dead. Although Adobe Flash player- the video player that originally used this technology is practically dead, RTMP itself is still valuable in live streaming. RTMP is still widely used in the first mile of video streaming and media servers transcode the RTMP stream into HLS and other compatible formats for playback in the HTML5 video player. Thus RTMP ingest for HLS is not dead and many social media platforms including Facebook, YouTube and Twitch use it.

There you go! Hope you could clearly explain the concept of RTMP and how it works!