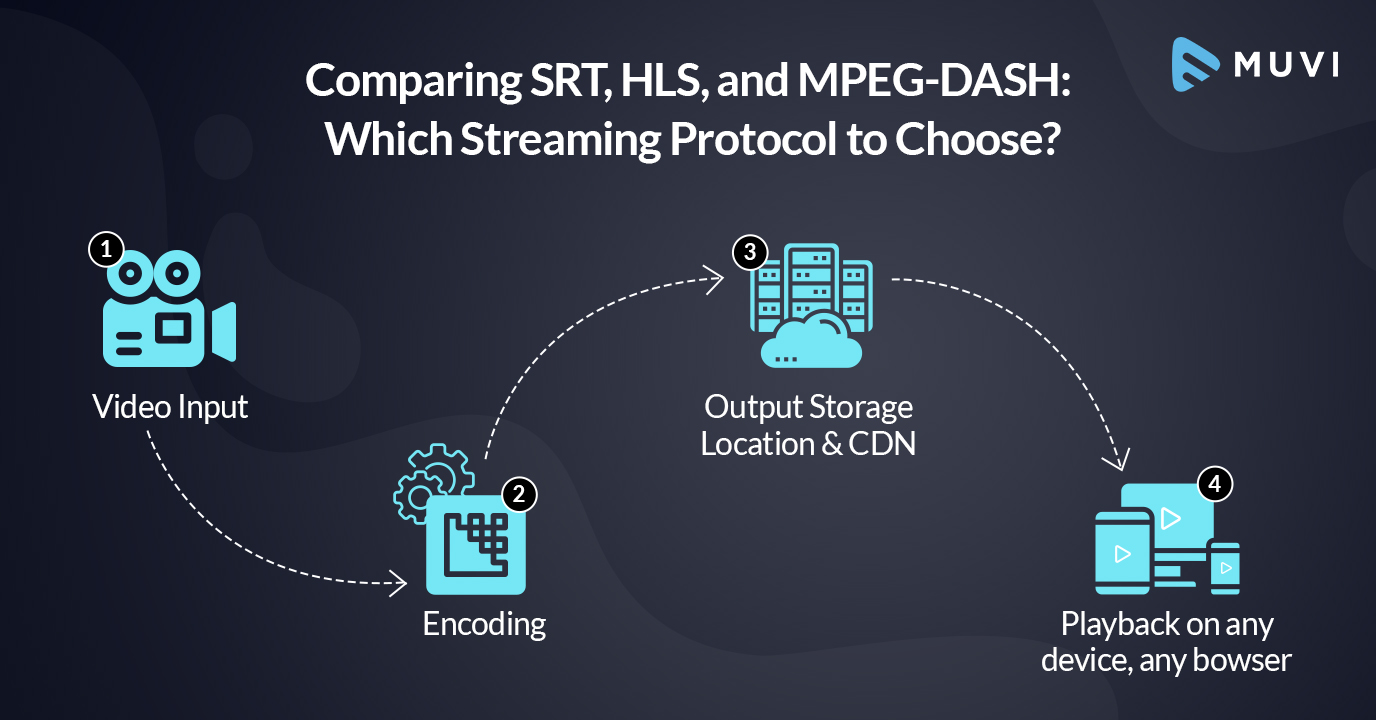 Streaming video requires the working of various technologies in unison. One aspect of this process involves knowing the various streaming protocols responsible for delivering both live streams and VoD to your viewers. As more and more streaming solution providers, broadcasters, and CDN providers prepare for a future filled with the widespread use of live streaming,  the need for exploring more efficient protocols as an individual content producer has never been greater. This blog would focus on comparing SRT, an emerging streaming protocol with  HLS and MPEG-DASH– the two most popular streaming standards.

Initially developed by Haivision Systems Inc., SRT is an open-source video transport protocol and technology stack built for optimizing streaming performance across unreliable networks with secure streams. Based on UDP, SRT makes it possible to transfer any data type, however, it is particularly optimized for audio/video streaming.

You see, what happens while streaming is, video/audio packets sent between two points experience a host of transport obstacles like bandwidth fluctuations and packet loss. As a result, video quality at the endpoint gets delivered at a lower quality than what it originally was. The goal of SRT implementation is to solve that issue.

By adapting to real-time network conditions, SRT optimizes video transport from one end to the other over unpredictable networks and minimizes packet loss, leading to a better QoE. It delivers high-quality video and audio with low latency. Not only that, with easy firewall traversal, SRT makes it possible to bring the best quality live video over the worst networks.

Where is SRT Supported?

Since SRT is still in the early stages of development, full-fledged implementation is still a work in progress. Most of the major live streaming platforms haven’t yet adopted SRT into their systems, which means that they can’t be used as endpoints. However, since it is open source and royalty-free, we expect more industry developers to integrate SRT into their systems in the coming months.

Developed by Apple, HLS is a protocol for streaming live video content over the internet. HLS is short for HTTP Live Streaming. HLS is an adaptive, HTTP-based streaming protocol that sends video and audio content over the network in small, TCP-based media chunks that get reassembled during playback.

Initially, HLS was supported only by iOS. However, HLS has now become a proprietary format, and almost every device supports it. That means a stream delivered via HLS will guarantee playback on the majority of devices — thereby expanding your audience. All Google Chrome browsers, as well as Android, Linux, Microsoft, and macOS devices can play streams delivered using HLS.

As the name suggests, HLS delivers video content via standard HTTP web servers. This means that you don’t have to integrate any special infrastructure to deliver HLS content.

MPEG-DASH is the latest and by far, the best competitor of HLS. Created by Moving Picture Experts Group between 2009 and 2012, it uses standard HTTP web servers like HLS. DASH is short for Dynamic Adaptive Streaming over HTTP that means that like HLS, it’s an adaptive bitrate protocol.

MPEG-DASH is codec and resolution agnostic, which means MPEG-DASH can stream video and audio of any format (H.264, H.265, AAC, etc.) and supports resolutions up to 4K. Otherwise, MPEG-DASH functions much the same as HLS. to know more about HLS & MPEG-DASH, go through our blog on HLS vs MPEG DASH: Which Streaming Protocol Should You Choose?

Which Streaming Protocol is the Best for you?

Prioritizing the above parameters helps you to narrow down on what’s best for you.

While SRT is a great bet for first-mile contribution, both HLS and DASH win hands down when it comes to playback. Better playback compatibility leads to a wider outreach, which leads to more engagement.

If you compare DASH and HLS, the weighing scale of compatibility would tip towards HLS. Here’s why- iOS users represent 25.26% in the global mobile operating system market share. Most of these users can’t play MPEG-DASH video streams unless they use third-party browsers.

Muvi supports RTMP and HLS feeds for your Live Streaming service. You just have to enter your live feed URL in the backend and Muvi’s Online Video Player will embed the feed for immediate playback to end-users.