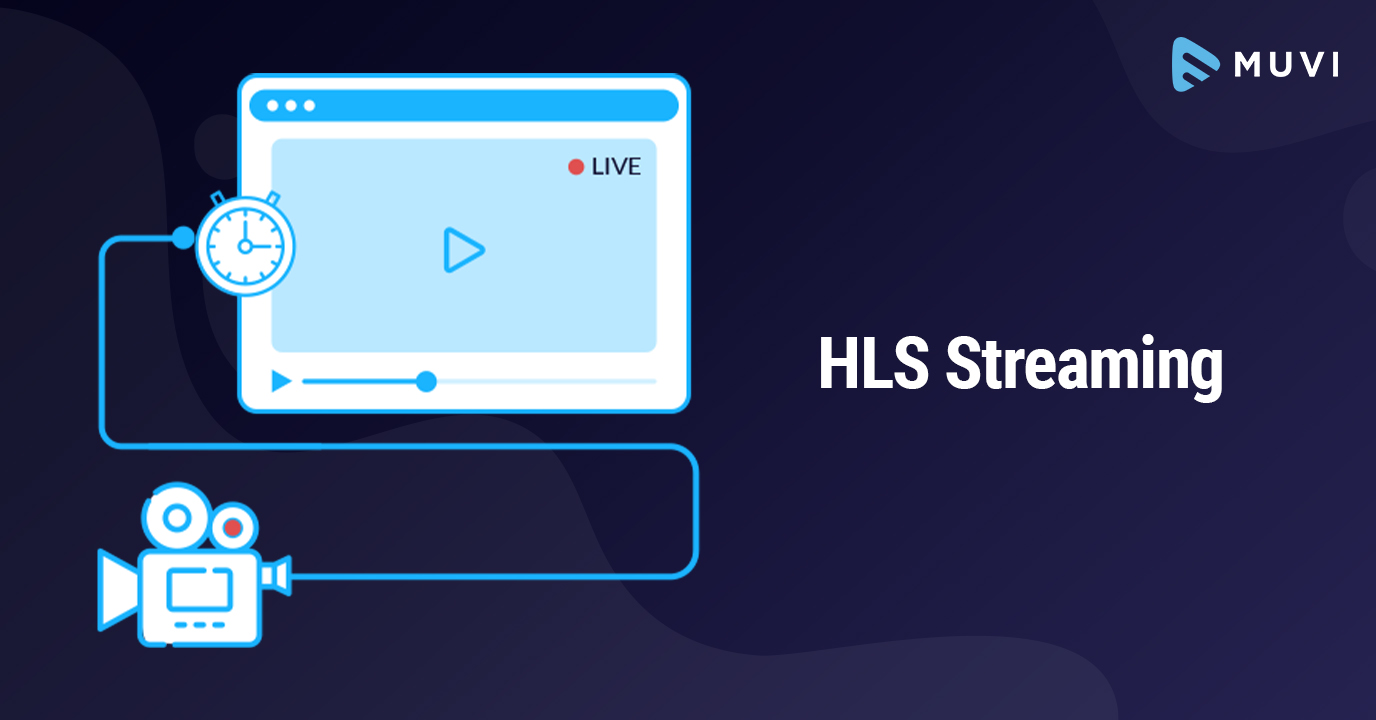 On-Demand video and live streaming is dictating the way entertainment is being delivered online to the world right now! However, there have been shifts in the way of delivering video content that some know of and some might not. Back in the 1990s, one had to download an entire software package just to play a single video file. Adding to the ache, video quality was never predictable and primitive connectivity speeds made video streaming more difficult.

And this is where video streaming with HLS comes into play.

So, let’s begin with,

HLS (HTTP Live Streaming) is an adaptive bitrate streaming protocol that is used for delivering audio and video content to viewers over the Internet. It was initially designed for Apple devices and is a key streaming format for iOS devices. However, it is also supported by Android, Windows, Linux, Microsoft, Microsoft Edge, and other platforms as well.

Why is HLS popular?

HLS can play your video content almost anywhere. It’s interoperability is the catch here! There are freely available HLS players on every other major platform such as mobile, web, and TV.

So, if you want to stream your On-Demand video content or broadcast live events and don’t want to miss out a large segment of viewers using iOS Apps or devices, HLS is the protocol your video streaming platform must deploy.

As it is functional over HTTP, you don’t require to run special servers. This makes it much easier to scale with HLS as compared to any other protocol.

How does HLS video streaming work?

To begin streaming, two essential processes have to take place, typically on a server, before video data distribution takes place.

During encoding, video data is formatted according to video-compression standards of either H.264 or H.265. This enables the devices to identify and decode data accurately. During this process, multiple video copies are created with different quality levels, or technically, encoded with variable bit rates.

In simpler words, the video copies are formatted in such a way that multiple platforms and devices can interpret them.

The origin server breaks down the video file into multiple smaller segments that have a standard length of 6-10 seconds. Index files are then created to specify the order and timing of playing individual segments.

Videos, once encoded and segmented, can now be streamed to the viewers’ devices as a direct response to the requests made to a content server.

On the other hand, a CDN(Content Delivery Network) can also be used to distribute the video stream easily across a geographic area. In this case, it also happens to cache data for faster delivery to the client devices.

To know more about CDN, check out our blog on Role of CDN in Video and Audio Streaming!

Once a video file is received, the client device determines the sequence in which the segments are to be played as per the index file. Meanwhile, client devices work on determining which stream quality to adopt. And this happens as per the available connection speed, screen dimensions, and local system resources.

HLS happens to be a common and universally supported protocol to stream video right from mobile devices to HTML5 video players.

Initially, HLS latency happened to be higher than that of the other streaming protocols. Low latency HLS, back then, required changes in the way video streams were served along with needing special support by CDNs and clients.

However, it is in late 2019 that a dynamic shift was brought by Apple with the introduction of a low latency mode of HLS that has sub-two-second latency for live streaming.

Thus, low latency is one big advantage of the HLS protocol.

Now let’s talk about the benefits of HLS in video streaming:

What is HLS Video Encryption?

HLS video encryption provides an extra layer of protection to your content when video streaming. This makes it very difficult for the viewers or end users to save the video to their devices.

During the transcoding process, video content is encrypted with a unique key specific to the video owner. Here, HLS video encryption acts as a DRM solution as it exchanges and checks the encryption keys before the video is played on the user’s device.

Taking the security factor into account, it is one of the best methods for delivering video content online. And for site owners with paid(protected) video content like elearning courses, PPV(Pay Per View) content, etc, HLS video encryption stands as the perfect solution.

HLS is popular in the broadcasting industry because of its inherent compatibility with HTML5 Players, the default playback method on web browsers. So, it automatically connects with users irrespective of the device they use. It has the edge over its counterpart RTMP as HLS protocol leverages HTTP to transfer video content in chunks to viewers.

So, if your platform supports multi CDNs as Muvi supports, you can stream video to any part of the world without compromising the quality. [Read on our blog on HLS vs RTMP:Decoding Streaming Protocols]

Muvi supports HLS feeds for your audio/video streaming and enables you to create audio/video playlist for On-Demand streaming by embedding the HLS URL to any third-party player and device.