Demystifying Video Transcoding: All You Need to Know 17 June 2022 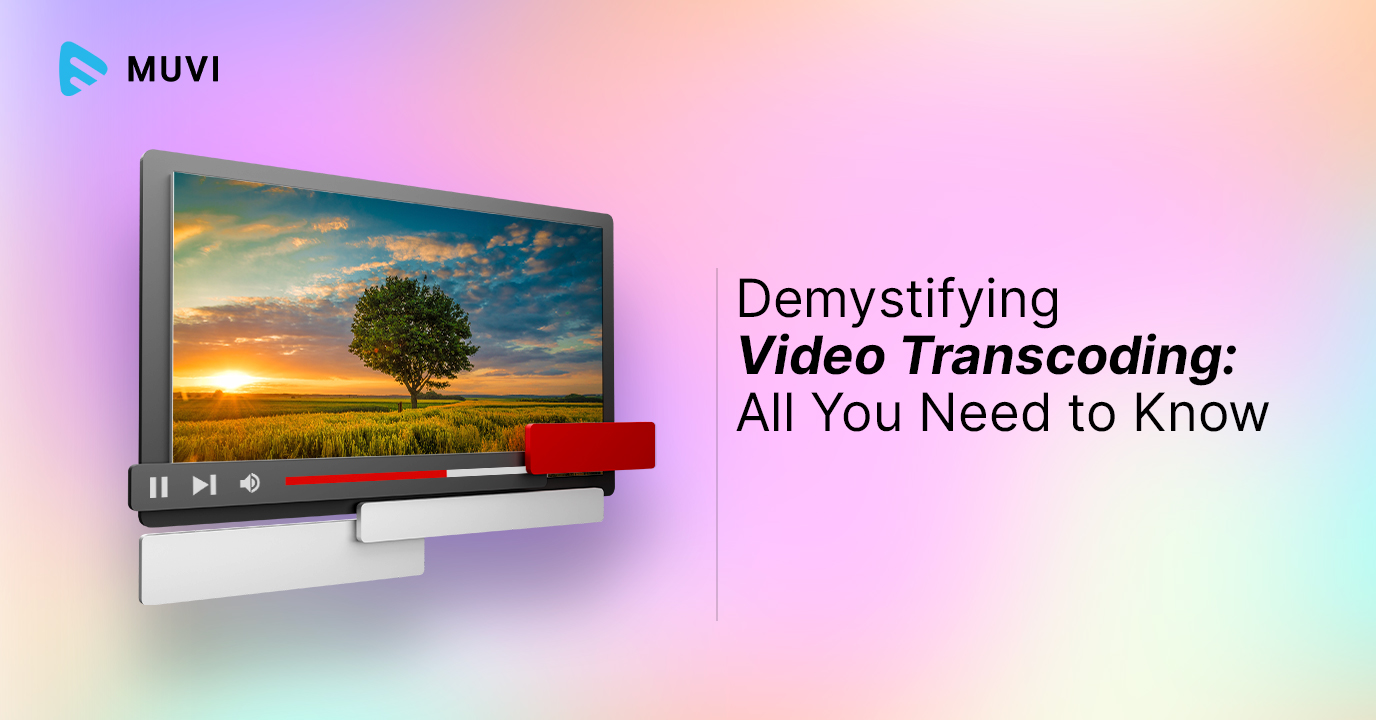 Video transcoding is pivotal for any type of video streaming. If you are into video streaming or have a business in this field, then you must know its importance. Basically, video transcoding refers to video processing where a video is transformed or reformatted from one format or codec to another new format.

Here the previous video format is mainly an internal structure from which it is transformed to a new format that is ready to be digitally delivered. But that’s not it, the process involves several steps before the video becomes ready to be consumed over various platforms and media.

Statistics say that nearly 90% of the viewers watch videos on mobile, while most of the users use various devices and media to stream videos online. To ensure that the videos are compatible with all such media and platforms, you need to transcode your videos. But how does video transcoding work? Or, exactly which steps are involved in video transcoding? In this blog, we will walk you through all that.

What Is Video Transcoding?

Video transcoding is considered to be the main task in adaptive streaming where it converts an encoded digital file or a set of digital files into a transformed or altered set of video files with higher compatibility and better capacity to meet the requirements of the viewer’s hardware.

Here adaptive streaming or adaptive bitrate streaming refers to a streaming technology that is focused on delivering videos in the most efficient way possible while ensuring the highest usable quality for each of the viewers no matter what type of device or platform they are streaming on. To give you a more in-depth idea on video transcoding, next we will walk you through how video transcoding really works and the detailed steps.

How Does Video Transcoding Work?

The video transcoding process basically takes place in a streaming platform or media server through several steps. Let’s describe each of these steps for your knowledge.

In the very first step of video transcoding, two main inputs are required – the information related to the input file and format and a set of relevant parameters to generate the right output. There are mainly two ways through which this set of parameters can be availed. Either you can access it from the rules within the media’s supply chain or can derive it from the metadata according to the variables related to the relevant workflow engine.

The next step is processing through the transcoding pipeline. The pipeline entails processing all of the transcoded file’s components, including video, ANC (Ancillary data), and audio. Here, some of the examples of ANC are digital data added to video/audio streaming or cover art images for streams or media files.

When transcoding begins, the metadata is shared among the components as needed. After analyzing the file and instructions, the transcoder configures the pipe.

Broadcasters can use a video transcoding solution to transform a single source stream into a number of resolution and bitrate options, allowing each viewer to watch the highest-quality stream possible for their device and connection speed. Also, it ensures, if a viewer’s connection improves, the broadcast will dynamically change to offer a better version.

Because WebRTC allows for browser-based encoding, broadcasters that want to add more graphics to their live feed can do so at the streaming server. During video transcoding, watermarks, logos, and other lower third graphics can be added.

When a media server ingests compressed video data, it repackages it into a separate container format known as transmuxing. The stream is repackaged from WebRTC to HLS in this example. As a result, content distributors can send the stream to a wider range of devices using a variety of protocols without modifying the original file.

One of the best practices you can adopt for video transcoding is – using a two-pass VBR (Variable Bitrate), encode high-quality videos with a variety of scene kinds. A two-pass VBR, unlike conventional VBR and CBR (Constant Bitrate) has two encoding stages:

Stage 1: The first stage calculates the total bitrate necessary for all of the video’s keyframes.

Stage 2: The second stage uses those bitrates to produce the full video.

The keyframes for scene changes are chosen using a two-pass VBR, with the encoding operations of each keyframe reliant on the preceding and subsequent keyframes. This is a good bitrate for producing high-quality, pre-recorded videos, but not for live-streaming.

Get Auto Video Transcoding Solution With Muvi One

You need to do proper research, should have the relevant expertise, and most importantly, should understand the exact set of technical requirements needed to offer high quality streaming experience to your viewers.

To bypass all such hassles and additional investment, the best option is – opt for a good video streaming platform provider like Muvi, that has in-built auto encoding and transcoding solution, so that you don’t need to worry about a single thing related to this. And that’s not it. Muvi offers you unlimited facilities through its competitive features and solutions such as your own branded app and website, metadata management, multiple monetization models, built-in SEO tools, user engagement tools, and many more.

Furthermore, Muvi’s no coding solution helps you accomplish any task even without writing a single line of code! Thinking of trying it? Take a 14-day free trial today (no credit card needed)!