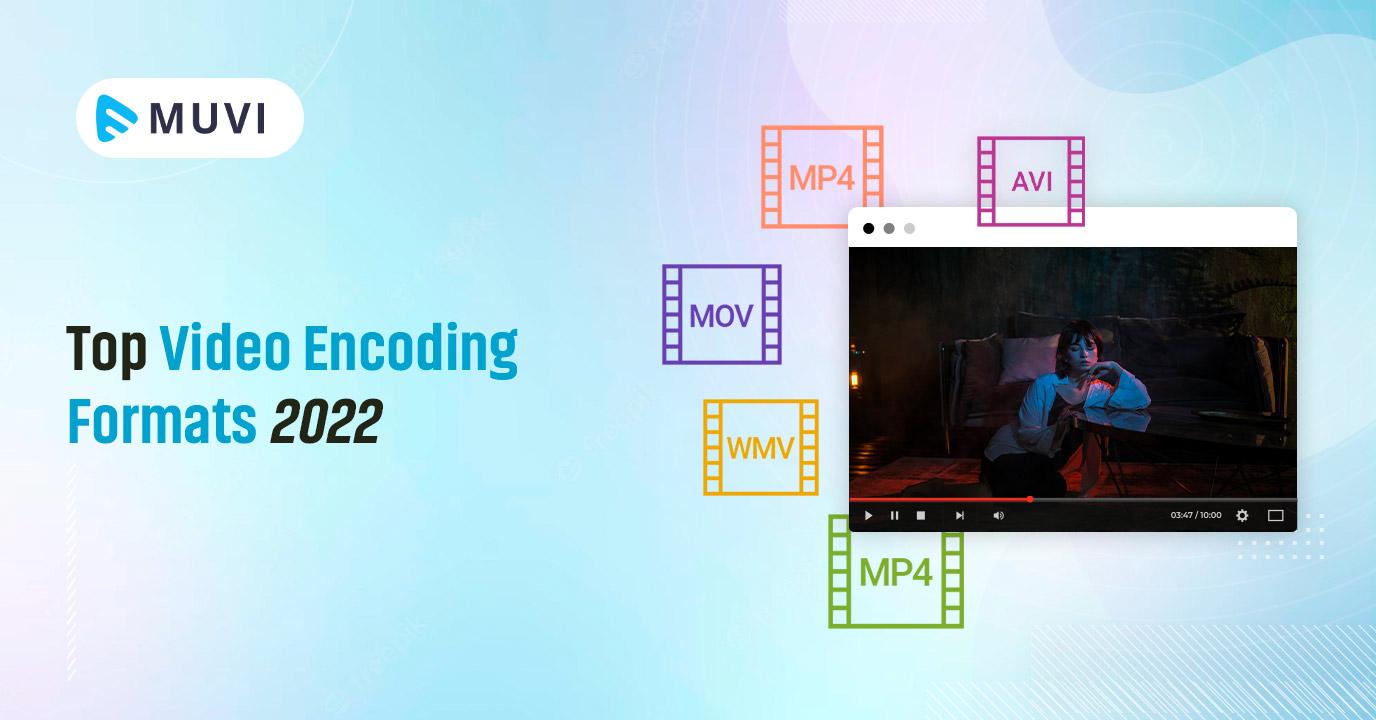 Videos are the new means that can serve multiple purposes – giving brand introduction, customer testimonials, product roadmap, product launch, and whatnot! More importantly, videos have emerged as the new ways to start your businesses such as online streaming and OTT business as well as VODs for various sectors such as e-learning, e-commerce, SaaS, B2B, and many more.

While dealing with videos of multiple formats has become imperative, it is even of more importance if you are running a streaming business. Video encoding plays a significant role in the transmission of various video content over the internet and so it is important to have some basic knowledge on it as well as the video encoding formats. So, in this blog we will guide you through the top video encoding formats and the relevant information you must know in 2023.

Video encoding is basically a process through which the video files get smaller through compression. Video encoding is a set of techniques used to optimize the quality of a video file while reducing its size to match the target viewing device and distribution mechanism.

It makes a great difference whether the video is meant to be seen on a smartphone or on a laptop. The available screen size, for starters, determines how the human eye perceives image quality. If the video is designed for smaller displays, we can tolerate a higher quality trade-off in order to reduce the size of the video. On a small screen, the human eye will not perceive the quality decline.

However, if the video is intended to be viewed on a large screen TV, there are few quality compromises that may be made before the human eye reacts to a poor image. Simply put, video encoding is the process of converting video into a digital representation that can be used by software and devices. No wonder that video encoding is highly important for streaming to ensure cross device and cross platform compatibility and optimum viewing experience for the end-users. Next, we will walk you through the top video encoding formats in 2023.

There are also two unauthorized file extensions: .m4A, which is an audio-only format, and .m4p, which is a protected MP4 file format. Although most people identify MP4 with audio and video, it may also hold other sorts of data because it is a container. It can, for example, store photos and subtitles.

When compared to other formats, what makes the MP4 so wonderful is its ubiquitous interoperability across applications and digital devices. MP4s operate with both Apple and Windows devices, smart TVs, digital car dashboards, media players like VLC, Android smartphones (in most formats), today’s popular gaming consoles, and others.

Apple created the MOV video file format, which is widely used. It was made to work with the QuickTime player. Videos, audio, subtitles, timecodes, and other media types can all be found in MOV files. It works with all versions of QuickTimePlayer, including Mac and Windows versions.

But MOV files take up a lot more RAM on a computer because they are such a high-quality video format. However, it is a great option if you’re using a Mac because it’s both safe and efficient. It’s also a high-quality digital data storage and transmission file format. MOV files are also supported by Real Player, and Windows Media Player. Furthermore, it allows you to blend diverse audio and video data. It can also be used in professional settings to separate segments during video editing.

AVI is an abbreviation for “Audio Video Interleave.” The .avi filename extension is a multimedia container type that is an extension of the AVI file format. AVI files can hold both audio and video data in a single file container, allowing for simultaneous audio and video playing. Even if these properties are rarely used, AVI files maintain a variety of streaming audio and video, similar to the DVD video format. Microsoft introduced the avi file extension as part of its Video for Windows product in 1992.

Later the Matrox OpenDML group produced and created the file format extensions in February 1996, which are now used by a variety of AVI files. Although AVI offers a higher output resolution, it must be compressed to fit into a smaller file size, resulting in a loss of quality. On Windows, Mac, and Linux devices, AVI file format works with practically every web browser. Also, it is highly compatible with YouTube and TVs.

The FLV file extension refers to a video or audio file that is transmitted over the internet using Adobe Flash Player or Adobe Air. Flash Video has long been the primary video format for almost all embedded video on the internet, including videos on YouTube, Hulu, and a variety of other sites. It is one of the most widely used and versatile video formats, with all video platforms and browsers supporting it. For internet video streaming platforms like YouTube, the FLV format is a viable choice. They have a minimal file size, which makes downloading them simple.

The FLV file format for Flash Video supports two versions of the screenshare (Screen video) codec, which is a screencast encoding method. Both of these formats are based on bitmap tiles, can be lossy by reducing color depths, and use zlib compression.

WMV stands for Windows Media Video, a file format designed for and mostly used with the Windows Media Player software found on practically all Windows-based devices. The format, or at least some versions of it, is supported by the majority of third-party video players.

WMV provides a high compression ratio, fast streaming, and easy storage. Also, it works well as an e-mail attachment, can be played on any Windows-based device and is highly compatible with Microsoft software.

MTS is a Microsoft Access Database extension. It’s a password-protected file that’s used to back up real-time databases and store offline versions of databases. Some Sony digital video cameras and cameras use the MTS file extension to record footage in this format.

The MTS file extension is used for mobile phone database files. MTS files are also referred to as MSM files. Important data such as contacts, messages, photos, and videos are preserved in database files. This file format is supported by a wide range of programmes.

While having the basic knowledge on video encoding formats is important, especially if you are from the streaming industry, you must know that most of the quality video streaming platforms come with this feature in-built.

Muvi is one such video/audio streaming platform provider that offers in-built encoding and transcoding solutions to ensure buffer free streaming for all your end-users. Not only this, Muvi is equipped with industry-grade streaming solutions like your own branded platform, scalable CDN, SEO tools, multiple monetization models, robust security, and many more. Take a 14-day free trial today to learn more.