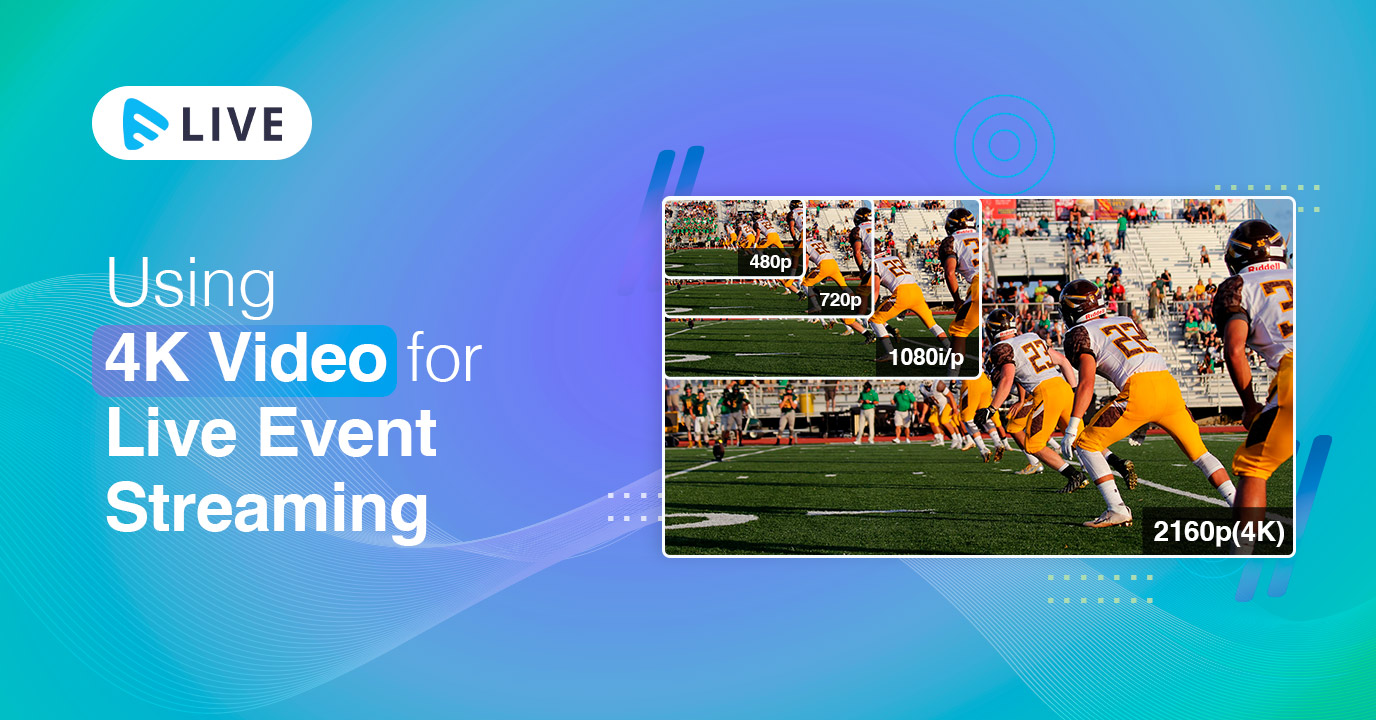 4k is the new standard and it has huge benefits in the video streaming industry due to its greater display range, and detailed picture representation. However, the emerging technology also has a downside as the amount of information captured by a 4K camera can sometimes tax even the best processors. Despite its challenges, 4K video is gaining traction especially in live event streaming. In this blog, we will be elaborating on what 4K live streaming means, describe its use cases and how to achieve it.

What is 4K Video?

There are two variants of 4K:

Many TV broadcasters, live streaming platforms and cinema projecting companies have adopted this definition already, but 4K-capable viewing devices are not yet used on a large scale. However, Ultra HD in all its variants is expected to be the new standard in the next 10 years, just as HD is the most popular format now.

The Current State of 4K Video

With the increasing popularity of 4K video cameras, video producers are finding it useful for live shows, conferences and journalism, but it’s also very common among live video producers capturing premiere sporting tournaments that require detailed picture representation at every second of action.

The reason for this is how great 4K looks on a big screen.  At live sporting events like football leagues, having the ability to stream in 4K is a huge benefit. The extra clarity on offer really does make for an incredible viewing experience, whereby viewers can experience the excitement of the match at every level of action in great detail.

The increasing availability of 4K delivers consumers a greatly improved video display image for larger screen applications, and can greatly reduce the ability for viewers to see any visible pixel structure on the screen. When combined with faster screen refresh rates, 4K has the potential to deliver almost as much depth as 3D.

Despite the advantages of UHD and the increasing number of videos using it, there’s still a huge amount of untapped potential consumption. The audience hoping to see UHD is much greater than the number of videos produced by current 4K content creators.

4K Video Codecs: Which Codec can Encode a 4K Video?

You know, in terms of video formats and codecs, 4K resolutions (3840×2160 pixels) contain four times more pixels than current popular Full HD resolutions (1920×1080). So, a 4K video has a lot more data per frame to transmit to your audience. Luckily, there are codecs that are up to the challenge of tackling 4K resolutions and beyond.

For more details on codecs, read our blog Video Streaming Codecs & Container Formats: All you Need to Know

HEVC, also known as H.265 and MPEG-H Part 2, is the successor to the current generation of H.264/AVC codec and is fully capable of encoding 4K resolution videos. It supports resolutions up to 8192×4320, including 8K UHD, for example, Full HD mobile broadcasting and 4K/8K broadcasting.

4K videos were encoded with H.264 codec at the initial stage when 4K video streaming had just emerged. And till now, H.264/AVC is still perfectly capable of processing 4K resolution videos. However, when you compare the codec with HEVC, H.264 is less efficient, with half data compression ratio and twice larger video size at the same 4K video quality.

VP9 is a royalty-free codec that has gained popularity on the web with the gradual shift from Flash to HTML5 technology. It’s widely implemented across web browsers like Google Chrome, Opera, Mozilla Firefox etc. Besides, you can also find VP9 4K videos on YouTube as well, which offers VP9 video at all resolutions.

AV1 or AOMedia Video 1 is an open source, royalty-free video codec designed for video transmissions over the Internet. It can be used together with the audio format Opus in a future version of the WebM format for HTML5 web video and WebRTC. AV1 aims to improve bitrate efficiency over HEVC and VP9 by roughly 50% and is designed for higher resolutions (i.e. 4K) where it is expected to achieve its biggest gains.

Until the technology advances to be less computer-intensive, the recommended codec that you should stick to for live streaming 4k video is H.264 or AVC. Open source codecs, such as VP9, are currently not included in live encoding hardware/software for the most part – but that may change in the future.

However, no matter which of the 4K codecs or video formats you choose, you’ll have the flexibility to live stream and record your 4K content in an easily consumable format for your audience thanks to adaptive streaming technologies.

Is it Possible to Encode Such High-Resolution Videos?

Well, the answer is not that simple. In order to encode high-resolution live content, you need to keep in mind that content quality is affected by resolution, frame rate, and bit rate. Higher the resolution, frame rate and bit rate, the more work your encoder will have to do. Your choice of encoder hardware or software may limit your ability to provide the highest-quality video content.

We would suggest opting for a streaming service provider like Muvi Live that is cloud-transcoding enabled, allowing your viewers to have a smooth playback experience using adaptive streaming. If you don’t opt for one, your encoder will need to do even more work to provide all the playback levels in parallel. For example, to live stream a 1080p broadcast, you would have to encode at 1080p, 720p, 480p, 360p, and maybe more.