What Are OS Environments? How Do They Impact OTT Platforms? 18 November 2022 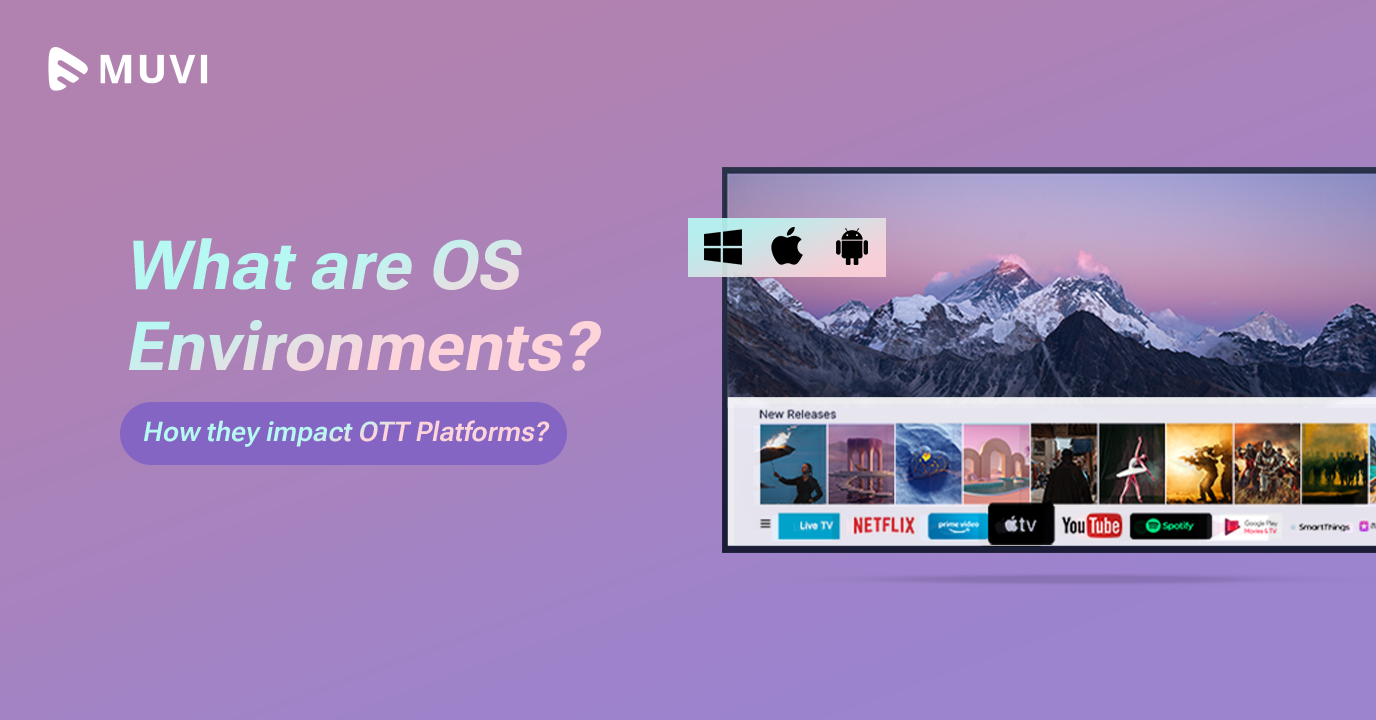 Operating System Environment, commonly known as OS Environment, is the environment in which a user runs the application or software. For a layman, operating environments might not be of much importance, as they rarely care about which OS they are using. They expect every app to function exactly the same way in every OS environment. But is it possible?

If you ask this question to technical enthusiasts or application developers, they would tell you how difficult it is to develop the same application for every OS environment. It is because every OS environment supports different IDE (integrated development environment), programming languages, APIs, and SDKs. So, though the apps remain exactly the same for the users, the developers have to be extremely careful while developing multiple apps which look and feel exactly the same as each other.

This development cycle leaves its impact on every software, including the OTT Platforms. If you are an OTT platform developer, this blog is for you. In this blog, we will be covering everything you need to know about OS environments, their impact on OTT platforms, some of the most common OS for OTT, and which OS will have the most significant impact on the OTT industry in the coming years. So, let’s begin!

What Are OS Environments?

As you might already know, Operating systems are the bridge between you and your computer/smart device system. Whenever you run any software, you open multiple files, create new files, and revisit the created files on the system memory. Your Operating System manages all the files and folders (including the application files) present in your system. Hence, in short, you can say that if you do not have an operating system, you will probably not be able to use any file or application present on your device, hence turning your device into a useless box!

Yes, you guessed it right! Operating System Environment is the heart and soul of any smart device.

That is why any software present in your device must be compatible with the operating system present on it. If it is not compatible, you won’t be able to open that application, even if you somehow succeed in loading it to your device.

Till now, we have talked only about the impact of OS on the development cycle of the app. But its direct impact falls on the user experience. As the process used for development differs, user experience is bound to be different. Change in UI-UX and basic app functionality often leads to confusion among users. They might find that the two versions of the same app appear and function differently. And this difference is even more pronounced when it comes to gaming and OTT apps. The basic user interface, graphics, video format, and quality of OTT apps differ a lot from one OS to the other.

However, all these impacts can be minimized by using native SDKs and standard OTT development platforms like MUVI.

You all might already know that MUVI is the world’s #1 OTT development software platform, but let me tell you one more thing. Now, MUVI is offering its SDKs to all of its users for free. You can use the SDKs to develop your applications in 16+ OS environments. And the best part is, these apps will look and feel exactly the same in all the OS environments. 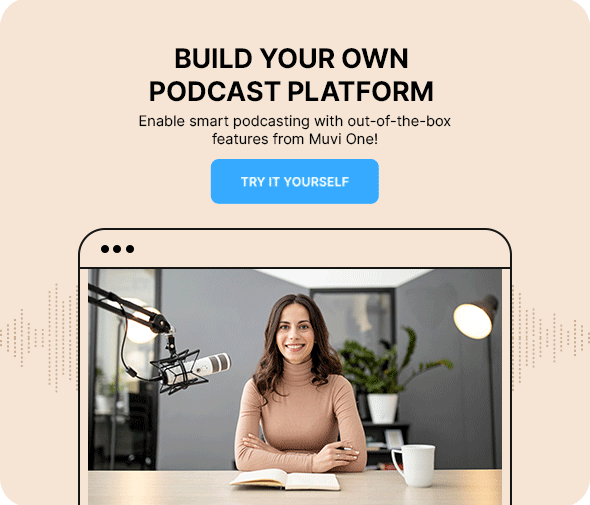 Some of the most common OS Environments for OTT Platforms

In the current scenario, OTT Platforms are gaining popularity not only in mobile devices but in smart TVs too. That is why, along with mobile apps, OTT apps for smart TVs have also gained immense importance.

If we look at the latest OTT market trends, we will find that the 6 most common OS and environments for these apps are: Android, iOS, Android TV, Apple TV, Roku TV,  and Fire TV.

Stats say that around 9% of global smart TV users are android TV users. And in the coming times, this number is stated to increase even further.

Due to its worldwide distribution and easy-to-use functionality, android TVs are not only popular but affordable too! That is why having an Android TV app is extremely important for the OTT industry.

Apple TVs are amongst the most widely used smart TV consoles in the world. It was launched back in 2007, probably one of the firsts in its segment. Since its launch, it has already found its place in over 25 million households. And that was at a time when Smart TVs had just started to gain popularity. We don’t need to say separately that the coming years will see a massive jump in these numbers.

Hence, you must not wait any further and start developing your Roku TV app right now! It’s quite simple and easy to do. Just follow the steps given in this blog.

Amazon Fire TV is slated to be one of the most popular Smart TV consoles worldwide in the coming years. This is because Fire TV sticks do not need Smart TV architecture to work. They can be used with any type of TV. This quality makes it a truly unique and valuable product.

Though Smart TV has started to dominate the OTT market, you still cannot ignore smartphones. And when it comes to smartphones, no other OS can compete with Android in terms of market coverage and bandwidth consumption. To be exact, Android currently covers over 2 Billion users worldwide, with a dominant 71.47% share of the global mobile market.

So, if your OTT platform is not catering to android viewers, then you are losing out on the biggest section of mobile OTT consumption. Well, no worries, you can develop an android OTT app without writing a single line of code, using MUVI.

After Android, the most commonly used smartphone OS is obviously iOS. Housed by Apple, iOS is one of the most popular mobile apps amongst the semi-rich and rich sections of society. Also, most technical enthusiasts prefer and suggest using iOS devices because of their smooth operation and longevity.

But developing an iOS OTT app is not that easy because of the strict restrictions put by Apple. But, you don’t need to worry, as MUVI is here to help you develop your iOS app.

OS Environments to Watch Out For in the Next Five Years

Till now, we have talked about the OS and smart TV environments that have already gained sufficient popularity in the past few years. But some more OS and environments are set to rise in popularity in the coming years, as more and more people start using those devices. Let’s now take you through some of them.

Samsung smart TVs are on the rise. And so is the Samsung Tizen OS. Also, the year 2022 has been amazing for the Samsung OS. It has gained new partnerships to expand its horizons. According to the latest reports, Samsung has partnered with leading international ODM companies like Atmaca, HKC, and Tempo to start manufacturing devices powered by Tizen OS. Hence, there is no doubt in saying that this smart TV environment will gain immense popularity and market share in years to come.

When it comes to modern televisions, LG has been one of the trusted names for ages. And with time, the company has started expanding its base beyond traditional TVs into the smart TV realms. The LG TV OS is typically used for developing LG Smart TVs. Since LG is a big name in the television manufacturing industry, there is no denying the fact that the LG TV OS ecosystem is set to see a good amount of rise in the coming years.

Vewd is one of the leading connected TV ecosystems. The VEWD App store features more than 1500 TV apps. Hence, it has great potential to rise in the coming years. That is why content curators are now looking to launch their apps for the VEWD TV Ecosystem too. Read more about VEWD TV in our blog “What is VEWD TV”.

The Ayoba app was launched by MTN in the form of an all-in-one free app for mobile phones. It is a kind of mega-application environment, where other apps from different industries can also register to deliver their services. Considering its uniqueness, the Ayoba app can become immensely popular in the coming years, especially in the OTT industry.

In this blog, we have tried to discuss some of the most popular OS and smart TV environments, along with some others that we expect to see massive growth in the near future. But, apart from these, there are many other OS environments too, which are becoming more and more important for the OTT and streaming industry. Like, Xbox, is now being used heavily as a streaming device, alongside its conventional use as a gaming device and platform.

So, as a video content curator, you must ensure the presence of your OTT platform and content across all operating environments. And, MUVI has made this task extremely easy for you, as you can now develop your own OTT apps for 16+ OS environments without writing a single line of code, using MUVI! Wanna try it out? Start your 14-day free trial today!