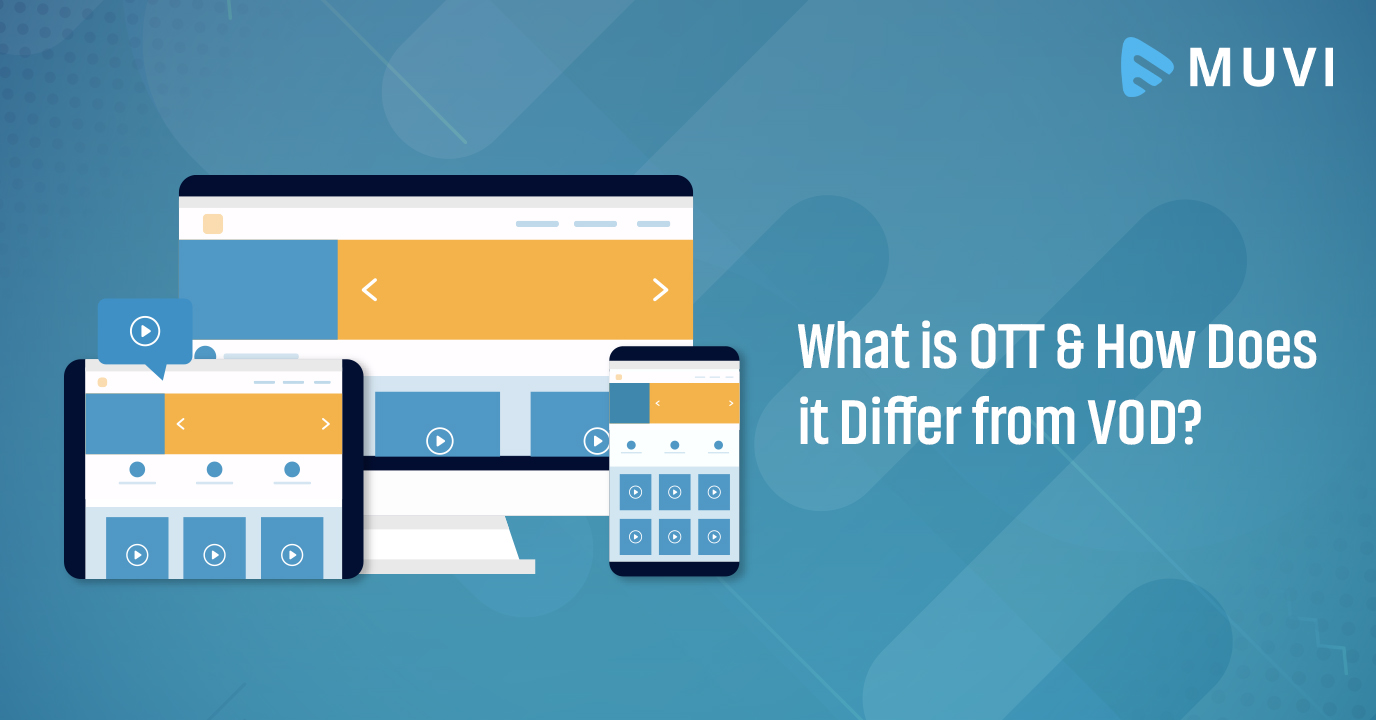 OTT services or Over the Top services, especially the OTT video segment became hugely popular over the past years making it a highly lucrative industry across the globe. No wonder that the Statista report predicted the global OTT video segment to reach US $178,012 Million by the end of the year 2021. With the rise in the number of smart gadgets and internet usage, OTT and VOD (Video On Demand) have become some of the popular terms in use. But do you know there are some basic differences between OTT and VOD though it may seem similar to you?

To give you a clearer idea, let’s start with the basics and delve deeper.

What is OTT: Definition, Advantages and More

OTT or Over the Top is basically a means of providing various video or audio content such as television, film, music content etc. through the internet. Here the term ‘Over-the-Top’ means the content provider service is going over the top of the existing internet services.

The demand for OTT platforms  grew significantly over the past years owing to the exclusive perks offered by them such as watching television shows as and when the viewers want, huge collection of movies, series and shows of various genres and languages, lot of variety in original content, flexibility to watch over any smart devices like mobiles, laptops, tablets etc. whenever the consumers want and many more!

Some of the popular OTT platforms around the globe are-

How Does OTT Work?

In OTT platforms, content is sent over a high-speed internet connection, instead of sharing content through traditional distributors such as cable, IPTV operators, broadcasters, and others.

Users can consume such content on multiple devices as per their preferences such as tablets, phones, TVs, laptops etc. as well as streaming devices like Roku, Chromecast etc.

But how does OTT actually work? Let’s see-

So, for OTT platforms, pre-recorded contents are stored and delivered through Content Delivery Networks (CDNs). Whenever a consumer selects a video or audio on the OTT app or website, a request is automatically made to the local CDN. Then the CDN can provide a manifest file of the video or audio chunks. At the same time a request to decrypt the chunks by the media key is made to the DRM (Digital Rights Management) server.

To give you an in-depth idea, the steps are shown below-

The device player requests at least 30 seconds of the content chunk to fill the playback buffer once it gets the manifest file information from the CDN.

The CDN returns the requested chunks and with the help of the media key, the chunks get decrypted and ready for playback.

The video/audio chunks are played as per the selected screen time for the playback.

Until the consumer presses the pause button or stops playing, the player will keep requesting for the chunks in order to keep the playback buffer full.

Also, the video/audio player needs to assess the available network bandwidth from the CDN to the device and can order lower or higher bit rate video/audio chunks in order to provide uninterrupted playback experience to the consumers. Generally, the maximum bit rate available is maintained to assure the video quality.

Questions may arise, what’s the reason behind the spiking demand for OTT services? The answer lies in the broad range of advantages it offers to the end-users as well as the service providers. And here I will walk you through the top of those-

The demand of the viewers, especially the young generation is changing fast and the transition from the television content to a more diverse and engaging one has boosted the growth of OTT platforms over the past decade. At the same time, there has been a decline in the engagement with the television content. According to the Neilsen analysis, the year-over-year decline in traditional TV viewing among the 18-24 years old population was the largest on quarter 1 (Q1) of 2015 while the decline has been prominent throughout the following years as well.  On the other hand, OTT contents are being consumed increasingly due to various factors- wider variety of content of various languages, genres etc., flexibility to watch on any device, cost-effectiveness, and others. As stated in a recent report by Statista, the number of OTT users is set to increase to approximately 2.71 Billion globally by 2025. No doubt that higher audience engagement is one of the driving factors to it.

It is not new that the exclusive content offered by the OTT platforms like Netflix, Hulu, Amazon Prime etc. is a major reason behind their high demand. And the availability of such original content is a significant advantage of the OTT content over the traditional TV content. For instance, according to a report by Statista, Netflix show ‘La Casa De Papel – Money Heist’ was the most in-demand digital original show in the United States followed by ‘Titans’ from HBO max as in September, 2021.

OTT platforms offer content with high sound and picture quality. As the content is offered online, the higher the speed, better the auditory and visual content. Furthermore, you can also customize the video and audio quality as needed.

Viewers of OTT content can access them any time irrespective of the release dates. There are no interruptions caused due to TV advertisements or waiting in a long queue for tickets.And it makes the OTT platforms extremely convenient and hassle-free for the end-users.

VOD or Video on Demand is a media distribution system that enables the users to access videos without any traditional video playback device. One of the top perks of VOD is there are no constraints due to the typical static broadcasting schedule.

Basically, VOD implies any video service that offers videos with the flexibility to the viewers so that they can decide when and what to watch. There are mainly three types of VODs-

Some of the popular VOD businesses are Netflix, Hulu, Disney+, and other online streaming services. Now, you must be wondering whether OTT and VOD are the same or not? Well, read on to know the answer.

OTT and VOD both are very common terms in the streaming industry and people often tend to mix them up. So, in order to avoid that, let’s have a look at what they really mean!

OTT and VOD are not mutually exclusive and are often used interchangeably owing to the flexibility they offer. Furthermore, a majority of the leading streaming services like Netflix, Amazon Prime, Hulu etc. include both VOD and OTT services. However, there are basic differences between these two as discussed above that are important to know for both the viewers and service providers. OTT and VOD are two closely linked terms but it is probable that the thin line between these two may get blurred in the near future with the growing usage of the internet instead of satellites and cables.

OTT Platforms OTT services What is OTT What is VOD OTT vs. VOD