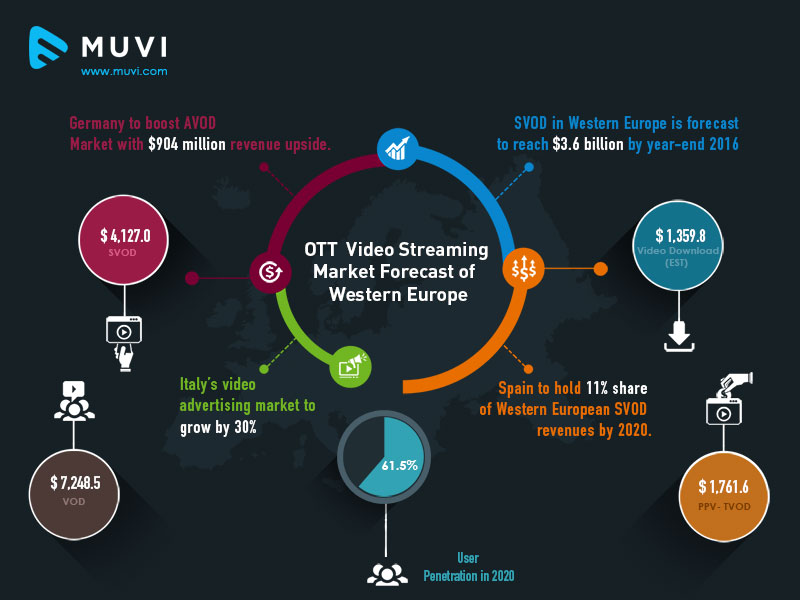 When we look at figures and forecasts, the fact that, this is the perfect time for OTT and digital video revenues to soar becomes clear. The trends are on all-time high, with over 2,563 on-demand services having established in the entire European Union.

Europe certainly is a growing OTT market. According to researches and studies, Western Europe OTT and online video market is expected to double in revenues between 2015 and 2021. UK certainly is going to be the biggest contributing market, amounting to 35% share of the entire Western European OTT market.

With an internet penetration of 79.3%, it is clear that the Western European audience is aware and is highly welcoming of new means of entertainment.

Looking at the country specific, a research from Digital TV Research states that OTT adoption in Scandinavia, Netherlands and the UK is quite high, but has been much muted in other countries such as France, Spain and Portugal.

Let’s have a deeper look at the OTT market of growing Western European countries in specific: 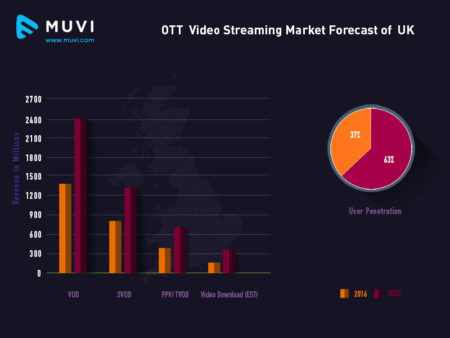 With an internet penetration at a staggering 92%, OTT audience in UK is as aware and equipped with entertainment media as much you find in a US household. However, the major difference can be the availability of free services in the European region and thus, consumers are less likely to pay for a subscription. Still UK OTT user penetration shows a huge potential for growth from 31.83% in 2016 to 54.23% in 2020.

A Parks Associates study stated that 33% of UK broadband homes subscribed to an OTT service in Q3 2015, as compared those of 15% premium pay TV subscribers. A recent study by Zuora, Netflix is by far the biggest SVOD platform in the UK, with 12.4 million subs (which includes 24% of the adult population). Sky Go was the second most popular SVOD platform with 7.2 million subs, Amazon at third with 6.7 million and Now TV was with 3.1 million. 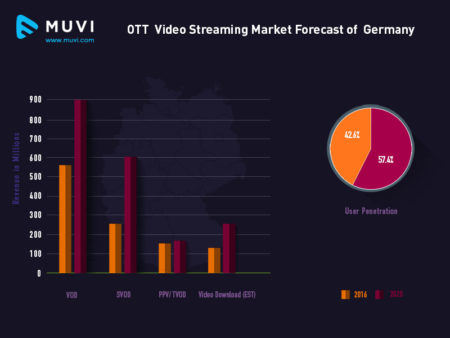 With the internet penetration of 88%, Germany is now showing great adoption for the recent video streaming boom. Music streaming is one popular activity among young millennials in Germany from the days of CDs to now streaming apps. France enjoys a high internet penetration rate of 84%, which states that users are already using internet to access entertainment content. In fact, 94.2% of the 27.9 million TV households in France are digital. With over 219 VOD services and 126 catch-up TV services being available to the viewers, the penetration of video on demand services in the country is expected to reach 37.52% by 2020 from that of 25.65% recorded in 2016.

French OTT market is dominated by the demand for local content is this might probably be the reason for Netflix’s losses in the territory for 2 years after it launched and finally decided to shut the Paris office (source). Popular broadcasters in France as of 2015 are France Télévisions, Groupe TF1, RTL Group and Canal+. The SVOD market has majorly been dominated by CanalPlay and Netflix (after its launch in 2014) and now by Amazon. 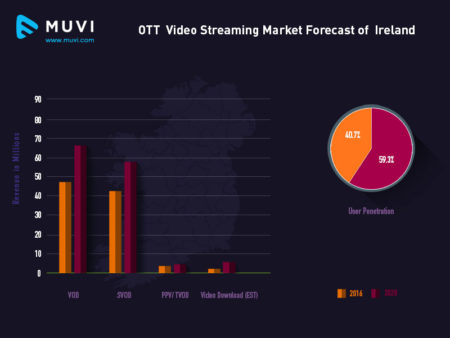 With 3 in 4 Irish Adults (16 +) watching VOD content, the OTT market shows huge potential for growth in Ireland (source). With an internet penetration of 83% and ARPU of USD $150.90, Irish entertainment market is on huge surge. According to a July 2016 survey by IAB Ireland, 65% of respondents watched on-demand movies online in March 2016, while 45% watched sports live streaming.

Since, there is a huge trend and availability for free VOD platforms such as RTE, TV3 and Channel 4 as well as YouTube and other social channels in Ireland, the total Video on Demand revenues in 2016 were recorded at USD 48.3 million, which is expected to grow exponentially at USD 67.9 by 2020 as Netflix, Amazon and other subscription services brace their grips. The total penetration of VOD services in Ireland was recorded at 8.38%, which is expected to grow at 12.20% by 2020. 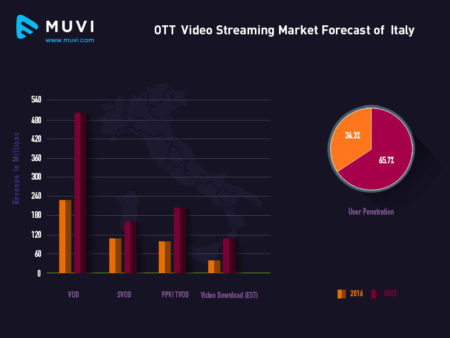 Italy watches more TV than any other country in Western Europe (more than four hours per-person per-day), according to a 2015 report. And with internet penetration of 62% and VOD penetration of 8.99% (which is expected to grow at 17.23% by 2020) Italy’s VOD market has shown a great VOD adoption rate over last few years.

The Video on Demand revenues in the country are expected to grow at USD 482.3 million in 2020 from that of USD 224.9 million in 2016. Italy’s subscription market is the fastest growing market, with over 17% people subscribing to SVOD services (source). Mediaset, Rai, Sky and Telecom Italia are the major broadcasters that rule OTT market in Italy. 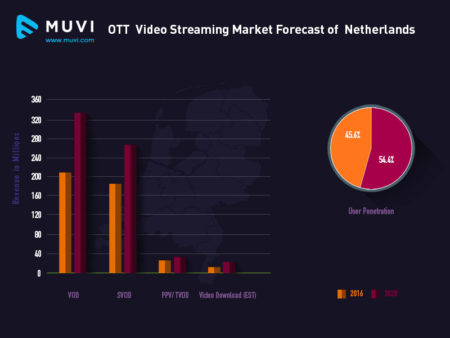 Netherlands has an Internet Penetration rate of 96% and according to a recent Dutch Consumer Video Behavior report, Dutch consumers devote 5% of their daily video usage to Video on Demand services, which accounts to about 15 minutes a day. When it comes to SVOD subscribers, the usage amounts to the viewing of at least 1 hour a day.

Some 17% of all Dutch households subscribe to Netflix, it being the most popular SVOD service in the country, especially among households with children (a quarter of these subscribing to Netflix).

About 2% of households in Netherlands don’t subscribe to pay TV and rely only on subscription services. Though the share is less but the Video on Demand revenues are showing a steady growth amounting to USD 214.3 million in 2016 and expecting to reach USD 329.3 million by 2020.

Xbox Video being the first ever international VOD service to be started in Austria back in 2009, today, foreign players such as Xbox, Sky, Germany’s Maxdome and Apple rule Austria’s video streaming market, all of these offering great selection of titles at a great selection of subscription options.

According to an IHS Screen Digest study in 2013, Austria’s online movie market was declared as having high potential for growth, recorded at $15.1 million in the same year (source). With an internet penetration of 83% and VOD ARPU of USD 45.46, the Video on Demand revenues accounted for USD 44.1 million in 2016 and is expected to reach USD 80.2 million by 2020.

Having a great selection of local as well as international subscription VOD services, the user penetration of video streaming services stands at 13.24% in 2016 and is expected to reach 17.88% by 2020. 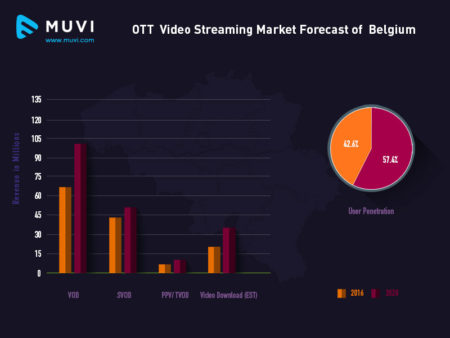 A study published in 2015 by Belgian Entertainment Association (BEA) stated that for the first time in 2014, sales of VOD and subscription VOD services exceeded the sales of physical DVDs and Blu-rays. Electronic sales and rentals were €130 million in the year at an increase of 16% compared to last year.

With an internet penetration of 85%, Belgian businesses are the second in Europe (50%) when it comes to e-information sharing through business management software. The VOD market is on all time high and expected to grow exponentially from USD 69million in 2016 to USD 99.4 million by 2020.

An IHS market study declared that by the end of 2016, Belgium and Netherlands combined will account for about 10% of total SVOD spending in the entire Western Europe. Revenues from subscription services in Belgium amount to USD 41.3 million in 2016 and are expected to reach USD 54.8 million by 2020. 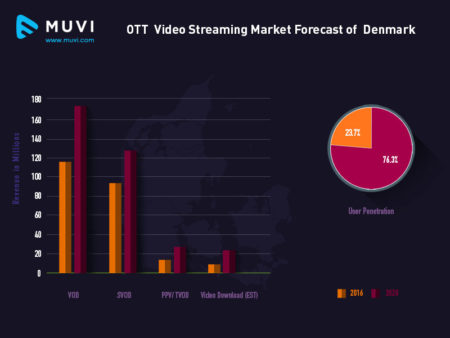 With an internet penetration of 96% and an ARPU of USD 157.04, Denmark is one of the most progressive countries in Europe. According to the Digital Economy and Society Index, Denmark was ranked as the most digital country in Europe, boasting the most advanced use of digital public services.

In an entertainment market still dominated by Cable TV, IPTV is a rapidly growing in Denmark with over 17% of households (442 000) having subscribed to IPTV in 2014. 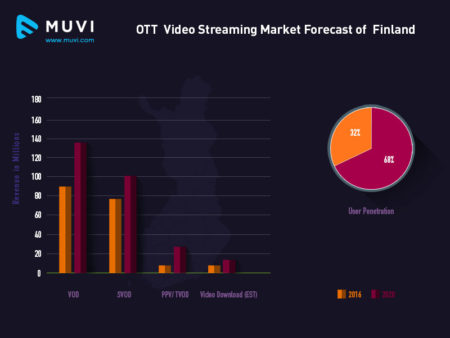 A recent survey on people’s video consumption habits in Finland revealed that over 88% of respondents between the age group of 35-44 years stated that they accessed video content via streaming or video-on-demand services at least once a week.

Finland’s Video on Demand is a healthy competition market with a mix of local as well as international providers succeeding at a good rate. Revenues from Video on Demand services in the country amounted to USD 90.5 million in 2016 and is expected to reach a good growth of USD 138.5 million by 2020. Norway has an Internet Penetration rate of 96%, and the highest SVOD penetration in the entire Nordic region, which clearly states that the country has huge potential for growth in the streaming world. With an ARPU of USD 105.64, the VOD user penetration is expected to grow from 25.50% in 2016 to 42.90% by 2020.

A recent NRK study stated that 24% people in the country now use OTT services as compared to that of 5% in 2012. YouTube is used by more than 40% and Netflix is used in 34% of Norwegian households. Music streaming has been recorded on all-time high in the country in 2016 Q1, accounting to 83% of revenues from recorded music (source). Portugal had 43 available video on demand services by the end of 2015, out of which 9 are established in Portugal. The major players in the Portuguese VOD market include national versions of iTunes and Netflix, other than Portugal Telecom, Cabovisão and NOS.

SVOD revenues will reach USD 8.3 million in 2020 from that of USD 5.5 in 2016. With an internet penetration of 68% and ARPU of USD 19.80, Portugal is slowly but steadily gaining pace with the rising OTT market. Spain has a high rate of web subscribers and broadband only homes who are more likely to opt out of Pay TV. This trend is even more popular among young millennials aged 24-35.

Video on demand services will experience a massive growth in terms of revenues in Spain from USD 167.9 million in 2016 to reaching USD 251.8 million by 2020. With HBO’s recent launch in the country and Netflix’s success from its launch in last year, Spain has huge potential for subscription services and will grow in revenues from USD 85.2 million in 2016 to USD 131.6 million by 2020. 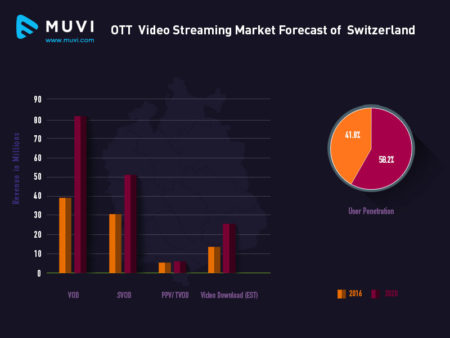 Overall the country has access to 64 VOD services and 147 on-demand audiovisual services including local as well as international players.

With more and more subscription services reaching different parts of Western Europe, the region is showing more than a welcoming sign to the OTT adoption. With Netflix’s success in almost all the regions it has launched, Amazon and other providers are taking the same route to success.

Consumers are opening up to spending on subscription services and this is sure sign of a better rise in terms of adoption as well as revenues contributing to the success of entire Western Europe region. Europe may also be considered a rigid territory where global providers may need to go highly local in order to set a strong impact. Given high internet penetration in most parts of Western Europe, the region is sure on a right lane to OTT success.

Muvi helps video content owners to quickly launch their own white labelled video streaming platform across screens and devices such as Web, Mobile, Smart TV platforms, Media boxes and Consoles, within a matter of few clicks!

Sign Up for a 14 Days FREE Trial with Muvi and unlock your ticket to the world of streaming..