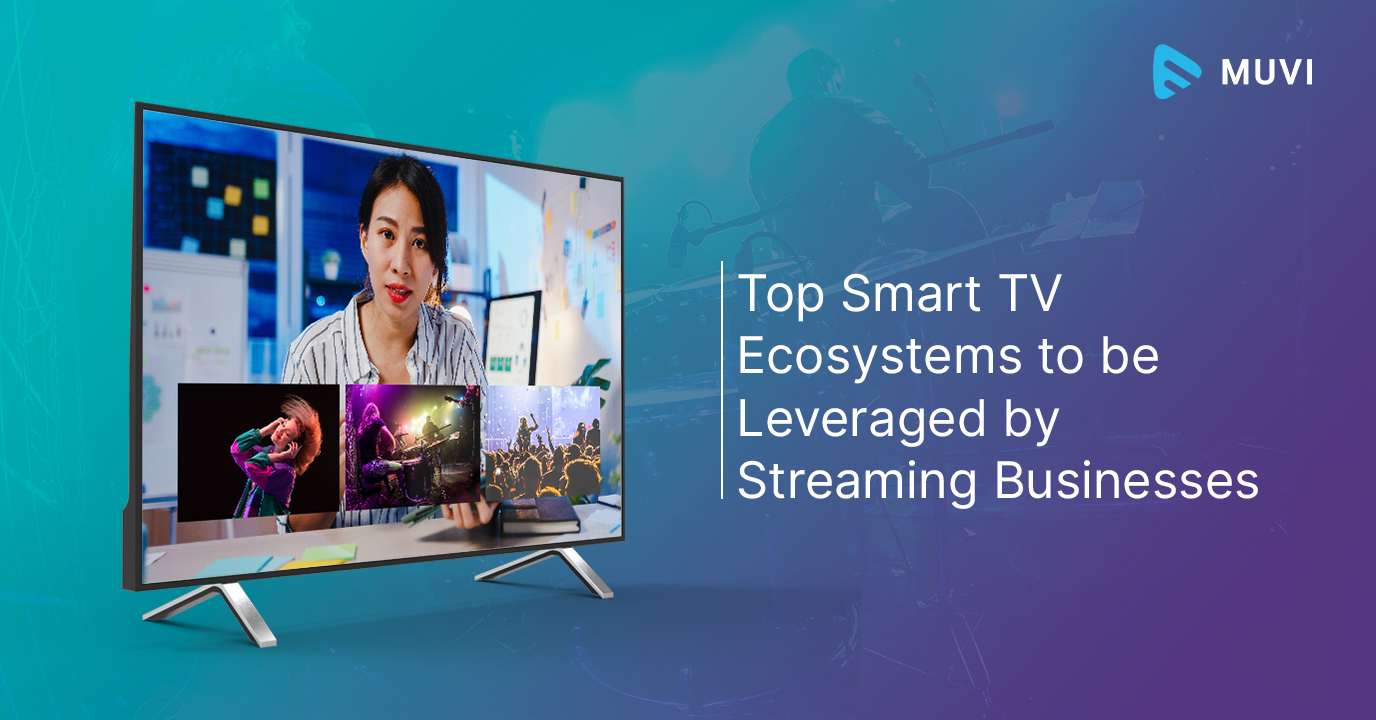 Smart TV streaming has been replacing traditional TV broadcasting since the past decade due to various reasons such as on-demand high quality streaming, better flexibility, access to a wide variety of streaming content, advanced voice control, and many more.

No wonder that the global smart TV market value surpassed US $197 billion in 2022 and is subject to grow at over 10% CAGR during the forecast period of 2022 to 2030. Statistics revealed that more than 45 million households use a smart TV in the U.S. itself while 76% of the TV households own a smart TV around the globe as of 2022 which is up from 70% in the previous year.

Not only do these figures represent the rising growth scope in the global smart TV market but explains well why the streaming business players are extending their existing target ecosystems to leverage the best of it. Smart TV ecosystems consist of a wide variety of smart TVs with inbuilt smart TV OS like Samsung Tizen as well as the ones which rely on the extended systems like Roku or Apple TV. The market is lucrative for all these segments.

To help you get started and make the best out of the rapidly expanding smart TV market, here we will walk you through the top smart TV ecosystems, their comparative study, and more. So, let’s get started!

The Rise of Smart TV Ecosystems

The origin of smart TV dates back to 1994, when the first-ever patent for a smart TV was granted to a French firm named Fast France Advanced Systems. However, the popularity of internet-based smart TV streaming has been noticed since 2010.

As the popularity of smart TVs grew significantly over the past decade, many of the major TV manufacturers announced production of smart TVs for middle-end and high-end TVs in 2015. And since that time the smart TV ecosystem has been growing exponentially to become one of the most lucrative sectors around the globe.

As stated in a recent market report, the revenue in the global smart TV ecosystem is expected to surpass US $450 billion by 2030 driven by the increasing popularity of the smart TV ecosystems like Apple TV, Android TV, Samsung Tizen, LG TV, and others.

Now, you must be intrigued to know, which segment from this growing smart TV ecosystem to choose, or how to know which one is going to be the most lucrative idea? Read on, because we are going to discuss in greater detail about the leading smart TV ecosystems, their market, future potential, new opportunities and more!

Roku refers to a set of digital media players with hardware that are produced by the American business Roku, Inc. The first Roku model, created in May 2008 in partnership with Netflix and founded by Anthony Wood in 2002, has since been updated multiple times. The updated Roku Ultra LT, Roku Streaming Stick 4K+, and Roku OS 10.5 are all part of the tenth generation Roku.

According to a recent industry report, there will be more than 63 million active Roku user accounts worldwide by the end of 2022. Additionally, Roku is responsible for over 15% of smart TV sales in the U.S. In the United States alone, Roku has over 36% of the market for video streaming, while the Roku TV OS has 6.4% of the market for streaming services for smart TVs worldwide.

Not only can you stream films, audio, music, podcasts, and more using Apple TV, but you can also download a variety of apps and games from the tvOS app store.

Additionally, Apple TV owners can easily rent or purchase TV shows, movies, and other media of their choice from the iTunes store, and stream their preferred content from a vast selection of options in the tvOS app store, including Netflix, Paramount+, Hulu, HBOmax, Discovery+, Prime Video, and many more. This allows users to stream according to their preferences on the one hand, and on the other, it allows streaming business players to target the ecosystems of Apple as well as other apps and streaming platforms to increase profit.

Google developed Android TV, an operating system for smart TVs that was made available in June 2014. It is basically an operating system (OS) for set-top boxes, televisions, soundbars, and digital media players derived from the Android OS (Operating System). You can cast content in many different formats, including music, films, photos, and more, from your devices to your TV with ease using Android TV.

The Android TV OS works with a variety of gadgets, including televisions, soundbars, set-top boxes, and digital media players. According to a recent market report, the global Android TV industry is forecasted to expand at a CAGR of 20% through 2021. The Android TV ecosystem is stealing the show for the streaming market players in order to take advantage of the potential future growth this industry offers due to the surge in demand in the commercial, industrial, and residential sectors. It also allows you to target both ecosystems since it supports both Android and Apple TV+ and Apple TV content.

Amazon Fire TV refers to a group of digital media players and microconsoles that Amazon created and released in April of 2014. A variety of device types, including the Fire TV Cube, Soundbar, Streaming Media Player, Smart TVs with Fire TV built-in, and Echo Show, are included in the Fire TV device family. While the second-generation Amazon Fire TV debuted in 2015, the Fire TV edition with the Amazon Fire OS and Fire TV interface was unveiled in 2016.

A recent report states that the Fire OS has a 6.4% market share and that as of January 2022, there were over 150 million Fire TV devices shipped annually. Despite having a smaller selection of apps than Android TV, Fire TV still gives you access to popular apps like Hulu, HBO Max, Disney+, Netflix, and others in addition to those from the Amazon app store.

Additionally, there are over 779 million apps available in the Amazon app store, indicating a profitable growth potential for streaming companies aiming for the Fire TV ecosystem.

A Samsung Tizen app refers to an app or channel  that is supported by Tizen OS and allows you to target the Tizen app ecosystem. The Tizen OS has its roots in 2011 when the Linux Foundation launched the Tizen project as a replacement for MeeGo, another mobile operating system based on Linux.

According to a recent statistical assessment, Samsung’s Tizen platform has the biggest market share of over 20% in terms of annual sales of smart TVs around the world. Samsung Tizen platform tends to stay at the forefront for the top streaming enterprises even in the upcoming years with over 190 million users in more than 190 countries.

To give you some context, during the past five years, sales of Tizen-powered devices have exceeded 300 million units globally, and Samsung has been recognised as the world’s top maker of smart TVs for 15 years running (all Samsung smart TVs are based on Tizen OS since 2015).

An LG TV app refers to an webOS app for LG smart TVs. WebOS on LG smart TVs offers a range of content from several apps in a variety of categories, including entertainment, education, life, games, and more.

Formerly known as Open webOS, HP webOS, and Palm webOS, LG webOS is a multitasking operating system that has been deployed on both mobile devices and smart devices such as smart TVs.

The market for LG smart TV apps has expanded dramatically over the past few years, with a projected 36% annual growth rate until 2022, according to a recent report. Also, the webOS ecosystem and LG’s smart TV made a substantial contribution to the worldwide smart TV market, which was valued at US $197.82 billion in 2022 and is set to expand at a CAGR of 10.9% through 2030.

Globally, there are more than 665 million households with smart TVs, and in 2020, the operating systems for these TVs will account for more than half of all sales. These numbers are increasing, and LG’s smart TV webOS is utilizing the expanding growth potential.

With more than 1500 apps and channels, the VEWD ecosystem controls a significant part of the market for smart TVs, making it extremely profitable for companies in the streaming industry. More than 450 million VEWD-enabled devices are part of the VEWD TV ecosystem, which also annually distributes its solutions to almost 30 million linked devices.

Market share of the leading smart TV ecosystems in the U.S.

Market share of the leading smart TV ecosystems in the U.K.

Global market shares and projections of the leading smart TVs

Having a presence on a few of these is important as per the target region while it’s difficult to build an app on your own, especially if you are trying for so many ecosystems. Muvi One, an all-in-one OTT platform provider, helps you do that just in a few clicks.

Not only does it offer a no-coding solution to launch your own branded smart TV app or channel but supports more than 13 environments including Android TV, Apple TV, Fire TV, and more.

Muvi One also offers a bunch of market-driven solutions like –

Take a 14-day free trial today to get started (no credit card required)!